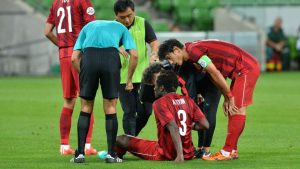 The Barcelona and Argentina superstar was earlier this month quoted to have revealed admiration for Gyan’s goal against Germany at the 2014 Fifa World Cup, touting the Shanghai SIPG frontman as “one of the greatest goal scorers he has ever seen”.

Gyan is currently in Ghana following an injury setback.

“It is a good thing when sometimes you do things wholeheartedly but you may not see [that] somebody [may have been] watching you.

I was even surprised when I heard it. It is great motivation to me for a legend like Messi acknowledging my work.

“I am honoured, honestly. It will even boost my confidence to do more as a player that people look up to. I also look up to him. I appreciate.”

Currently all-time top scorer of the Black Stars with 48 goals, Gyan also stands as Africa’s highest goal scorer at the Fifa World Cup with six goals across three tournaments. He is also the historic scorer of Ghana’s first World Cup goal in Germany 2006.