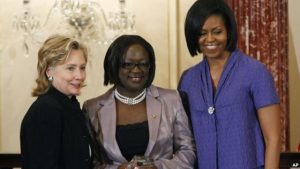 FILE – First lady Michelle Obama and Secretary of State Hillary Rodham Clinton present the 2010 International Women of Courage Award to Jestina Mukoko of Zimbabwe on March 10, 2010, at the State Department in Washington.

HARARE—Zimbabwe human rights activist are celebrating the publication of a memoir recounting abuses by the country’s security apparatus, calling it a crucial reminder of obstacles they still face.

In the book, Jestina Mukoko, director of the Zimbabwe Peace Project, discusses her 2008 abduction and torture by state security agents in Harare.

“They were bashing the soles of my feet. That went on for hours. I was made to kneel on gravel. You know the small stones piercing through your skin, the pain is unbearable,” the author told VOA.

In the book, she describes how agents also exposed her to extremely loud music day and night, interrogating her for hours on end before handing her over to the police who took her to court on charges of plotting against the government.

She was released on bail in March 2009 and a judge ruled that September that her rights had been violated.

She said the government targeted her in 2008 because she was investigating rights abuses committed by state security forces during elections earlier that year. 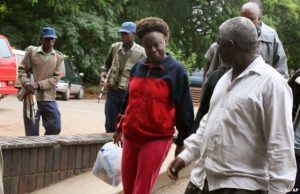 Advocacy groups said her story is not an isolated one and that people who speak out against the government of Robert Mugabe continue to face intimidation, arrest and other abuses.

Just last month, activists marched in Harare to demand an investigation into the disappearance of journalist and activist Itai Dzamara in 2015.

Dewa Mavhinga, a senior researcher in the Africa Division at Human Rights Watch, said neither abductees’ case is unusual.

“What happened to Jestina Mukoko can happen to other people, continues to happen, we have a recent abduction last year of Itai Dzamara,” he said. “He remains disappeared outside the protection of the law. So this is important to show that these things are happening and more importantly there hasn’t yet been accountability.” 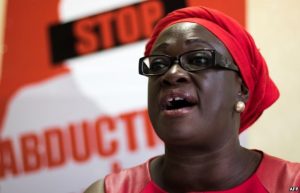 FILE – Zimbabwean Human rights activist and former political abductee Jestina Mukoko speaks at the launch of a booklet on enforced disappearances coinciding with the anniversary of the disappearance of Itai Dzamara on March 9, 2016 in Harare.

Zimbabwe’s government denies the charge that there is no impunity for abuses.

The chairperson of the Zimbabwe Human Rights Commission, Elasto Mugwadi, told VOA that the commission will investigate the case if Mukoko files a complaint about the abuses chronicled in her book.

But according to Mukoko, who says she wrote her book to comfort others who have had similar experiences but are afraid to come forward, seeking redress via formal government channels would be pointless.

“The challenge that we have before us is to heal those wounds. And we need to be able to look back and say we don’t want that to happen again,” she said.

Since her release in 2009, Mukoko has remained in Zimbabwe to continue her humanitarian work.