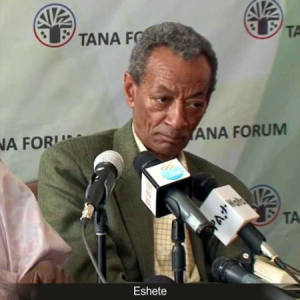 At this, the fifth Tana forum, it may well be premature for a full-fledged retrospective. Still, a glance at the past may help to remind us what inspires and animates our annual gathering at Tana.

Tana Forum began as an initiative of the Institute of Peace and Security Studies of Addis Ababa University, Inspired by the exemplary work of the Munich Security Conference. The late Prime Minister Meles Zenawi, the first champion of Tana Forum, was convinced that the Forum would serve to promote two companion aims, aims that he artfully and passionately pursued throughout the course of his public life. First, to enrich reasoned public discussion on the challenges of peace and security facing Africans in ways that extend the reach and depth of the terms of public debate; and; second, to foster a shared understanding of the nature and source of these challenges in order to forge a collective African vision, voice and capability on how best to avoid and overcome African’s troubles in this area. The idea was not, of course, to supplement the valuable work of formal institutions. To the contrary, Meles Zenawi worked tirelessly to strengthen African regional and continental institutions such as IGAD, NEPAD and the African Union as well as to elevate their international standing. The aim instead was to complement the efforts of Africa’s formal institutions by exploring the distinctive possibilities and virtues of alternative public fora for reflection and conversation.

Tana Forum offers a public space for reasoned deliberation unfettered by either the mandate and formalities of official fora or the exigencies in such bodies for reaching decisions and taking actions. The determination to convene an unceremonious assembly was evident from the beginning. I recall our distinguished chair, Chief Obasanjo’s, in a characteristic expression of his wise stewardship, casting aside part of his robe during an early forum to highlight the call for an unbuttoned exchange of ideas. The Forum chose to solicit the hospitality of the city and people of Bahir Dar in order to secure a peaceful and beautiful haven, where the participants can wholeheartedly join public discussions undistracted by official engagements. There are various reasons in favor of an informal African forum on peace and security. For one thing, national discussions on immediate matters of security tend to be inhibited by secrecy and other considerations of state. Second, national and other formal fora are not readily responsive to the fact that many challenges to African security increasingly defy national borders, and that this reach extends beyond the continent. Consider, for instances, the deft deployment of social media for propaganda and recruitment by militant groups. Further, personal and public virtues like toleration, crucial for the fate of peace and security, cannot be engendered or bolstered by formal institutions alone. Finally, the strains and divisions that surfaced in the European Union in the wake of the recent flow of refugees to Europe is a salutary reminder of the risks incurred and frailties exposed by banking on formal arrangements.

Another feature that breathes life into the proceedings of the Forum is the unusually wide range of interlocutors. There are in our midst political leaders, senior officers of intergovernmental institutions and prominent members of civic and business communities. Also present are scholars, seasoned practitioners, youth, and Africa’s committed partners. The robust representation of leaders and citizens from a wide spectrum of African society matters because the cause of peace and security is everyone’s concern and its imperilment is felt more by the many poor and vulnerable. On the latter, think of the truly tragic use of abducted young girls as sexual slaves and suicide bombers by Boko Harem. Tana affords a rare opportunity for us to hear African leaders of state and government speaking in a personal capacity and voice. The presence of former heads of state and government, now released from the responsibilities of public office, enables us to benefit from their practical wisdom and experience. The interaction between incumbent political leaders and individuals with whom they do not normally enjoy direct contact may reveal aspects of the character, values and convictions of Africa’s leaders that go beyond or against the grain of their public self –image? Moreover, the diversity of participants and perspectives contributes to the democratic ethos of the deliberation at Tana. Amartya Sen remarks: “democracy has to be judged…by the extent to which different voices from diverse sections of the people are actually heard.” In this respect Tana Forum modestly carries on a venerable tradition of democratic participation practiced at different times and places much as the early American town-hall meeting, the Paris Commune, and the African village assembly, here symbolized by the tree depicted before you.

The subjects so far selected for attention at the Forum address issues central to the achievement of peace and security in Africa. The significance of diversity and state fragility — the theme of the maiden session — has been vindicated by developments in the aftermath of the Arab Spring and by the spread of militant movements marching under the banner of faith — the latter was the focus of last year’s forum. Another session looked into the illicit flow of funds from Africa. The Panama Papers and the numerous African cases already revealed in the files vividly show that the rich and powerful secretly divert scarce African resources at the expense of the populace’s abiding interest in growth and equality, this year’s them unities us to take a measure of how we are treated in the global security agenda and to explore promising possibilities to enhance Africa’s agency in shaping it in the future.

Beyond the examination of these subjects, the Forum now hosts the annual Meles Zenawi memorial lecture devoted to critical appraisals of political leadership in Africa.

Alongside the forum, there are now regular occasions for interaction among participants at the forum and the students and academic staff of Bahir Dar University on issues that bear on the concerns of the Forum.

Yesterday, Her Excellency, Ms. Louise Mushikiwabo, Minister of Foreign Affairs and cooperation of the Republic of Rwanda, spoke on the rationale for an African developmental state, drawing upon the encouraging experience of Rwanda.

In sum, in a short span of time, the Forum has emerged as a vibrant vehicle for public discussion and reflection on how Africa can be free from recurrent and recalcitrant strife, strike which plainly stands in the way of popular yearning for enduring progress in self-government and emancipation from poverty across Africa. This is an auspicious beginning for joining the quest to revisit and to revive a sense a sense of Pan-African solidarity that we, together would the continued support with his Excellency Prime Minister Hailemariam Deslagen and our partners, can now carry forward with confidence.

. Culled from Real Magazine.Prof . Andreas Eshete, special advisor to the prime minister of Ethiopia and deputy chairperson of the Tana Forum Board presented this speech at the Tana High-Level Forum on Security in Africa which held on April 16 – 17, 2016 in Bahir Dar, Ethiopia