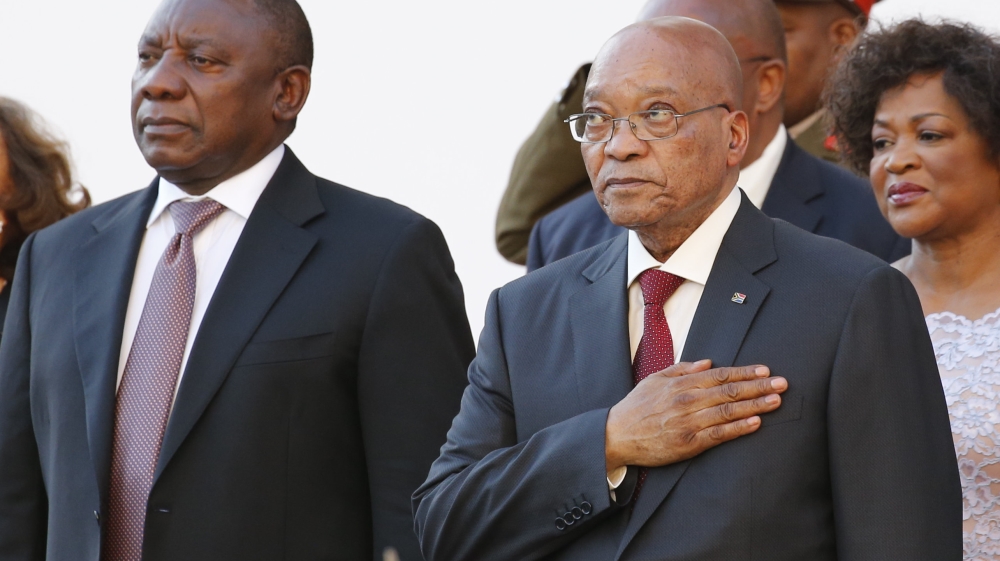 Johannesburg, South Africa – Rushing past rows of idling cars at an intersection on Jan Smuts Avenue in Rosebank, a newspaper vendor holds up Friday afternoon’s edition of The Star.

The impassive vendor flashes the neatly folded newspaper this way and that, silently imploring drivers to show some interest in the president’s dilemma. But as space opens up ahead, the cars snake through the intersection, carefully dodging the offer.

The highest court in the country found that Zuma, and the ANC-led National Assembly, had acted illegally in the manner in which they disregarded the recommendations of the Public Protector’s report into state-funded upgrades, worth up to $16m, to Zuma’s personal home.

As well as some security features, the funds paid for an amphitheatre and swimming pool, among other modifications to the rural residence in Nkandla.

In its ruling, the Constitutional Court gave the president 105 days to repay the cost of non-security-related upgrades.

Some South Africans expressed an expectation that the African National Congress (ANC) would do, or at least say, something. One tweeted: “After that judgement, only the ANC can explain to us why is Zuma still our president.”

Zuma addressed the nation, apologised and pledged to repay the costs. A chorus of indignation ensued as the opposition called for him to step down.

The lasting power of Zuma

The ANC insists that those clamouring for Zuma to be removed from his position cannot dictate how the party goes about its business.

“If we all shout in the media for Zuma to go we will never understand each other,” said Gwede Mantashe, the ANC’s secretary general, during a press briefing after Zuma’s address on April 1.

The Constitutional Court ruling came shortly after the National Executive Committee of the ANC affirmed its confidence in Zuma’s leadership following revelations by Deputy Finance Minister Mcebisi Jonas that he had been offered a promotion by members of the Gupta family. The Guptas are closely associated with the president and own businesses ranging from tech firms to media outlets and energy and mining businesses.

“I am in charge of the government, I appoint in terms of the constitution,” Zuma told parliament in response to the incident.

“There is no minister who is here who was ever appointed by the Guptas or by anybody else,” he said.

“It is just a smear campaign against the president; they want to discredit him and the ANC as the elections are approaching,” Mandla Nkosi, a taxi driver in Kwa Mashu said in an interview with a local publication. “Our people are being misled by the white media. They are fed wrong information about our leaders, but we who know the truth will not fall for that.”

The staying power of the ANC

Of the speculation over the fate of the president, Mantashe said: “The ANC does not listen to the hype created by the media. If the ANC worked that way, we would not have an organisation.”

“If the ANC’s view is that it can comfortably win large numbers of municipalities in the upcoming local election despite what has happened, they are right,” said Professor Steven Friedman, the director of the Centre for Democracy at the University of Johannesburg.

While the ANC is expected to be challenged in major metropolitan areas such as Johannesburg, Pretoria and Port Elizabeth, it is still expected to win the vast majority of seats in the forthcoming election. Just 22 years after the democratic transition, the former liberation movement remains highly popular with the electorate. Millions of South Africans continue to identify with the ANC and to see themselves reflected in it.

“There are a variety of reasons why people in informal settlements, townships and rural areas will continue to vote ANC despite the sort of ferment in the urban areas around this issue,” Friedman explains. The ANC has delivered basic services such as water and electricity to black South Africans who were systemically excluded by the apartheid regime.

For others, however, the centrality of the Nkandla scandal in the South African political spectacle detracts from the greater challenges facing South Africans.

“I think it is ridiculous for us in the second-most unequal society in the world to somehow wash our hands clean of the whole situation and say that a house of the president [worth millions of dollars] is the crux of all our issues as a country. I don’t think that’s true or fair to the actual practical reality for people on the ground,” Brian Kamanzi, a Cape Town-based writer, told Al Jazeera in a phone interview.

South Afirca has been grappling with growing inequality since the end of the apartheid regime. Haroon Bhorat, a professor of economics and director of the Development Policy Research Unit at the University of Cape Town, wrote that the country “has seen a moderate reduction in poverty levels, combined with a sharp rise in income inequality since 1994”.

In 2014, the World Bank reported that under the ANC-led government, the country’s social grant system, free basic services and taxes favouring the poor had halved the proportion of the South African population living on $1.25 per day or less. Thirty-nine percent of the population was still living in poverty, however.

While last year, Oxfam noted that the two richest South Africans had the same wealth as the bottom half of the population.

“Our schools are crumbling, what is the government doing about that?” Kamanzi asks. “Why is that not the same level as a Nkandla crisis?”

Dissent from the ANC

The extent to which the Nkandla scandal has coloured how people view the ANC is unclear.

“The problem about politics in South Africa is that a fairly thin spectrum of the society gets to talk and we really don’t know what the rest think, because nobody hears from them,” says Friedman.

Mantashe insisted during the press conference that the ANC would be going out to the people, to apologise and explain what had happened. But to remove Zuma from office, he said, would be tantamount to the party tearing itself apart.

It has already experienced something similar: when the ANC removed former president Thabo Mbeki from his position, some disgruntled ANC members formed new parties.

The Economic Freedom Fighters, led by the former ANC Youth League president Julius Malema, brought the Zuma house case before the Constitutional Court. Malema became one of Zuma’s fiercest critics after he was expelled from the ANC.

Zwelinzima Vavi, the former general secretary of the ANC-aligned trade union federation Cosatu, who championed Zuma during his first presidential campaign, has also turned against him in recent years.

“I feel responsible for the fact that I trusted him when I shouldn’t have,” Vavi told Al Jazeera. “We trusted that he would lead us into an agenda of decent work, eradication of the education and healthcare crises, fighting for our people in the rural areas, food security agreements, land reform, and fighting against corruption and crime.”

In the meantime, the Democratic Alliance (DA), the largest opposition party in parliament, has tabled a motion of no confidence in the president in the National Assembly.

It is not the first time the DA has brought such a motion against Zuma, and none of its previous motions have succeeded. The ANC has a 60 percent majority in parliament, which it uses to assert the official party positions. Last month, another motion of no confidence brought against Zuma by the DA failed as 225 MPs voted against the motion, while 99 voted for and 22 MPs abstained.

However, Mmusi Maimane, the DA leader, says he is sure that this time the motion will not fail.

“The Constitutional Court has already ruled to say that he is in serious violation of the constitution and is in breach of his constitutional obligation,” Maimane told Al Jazeera. “That is a crisis for a country – you can’t have a president who does that.”