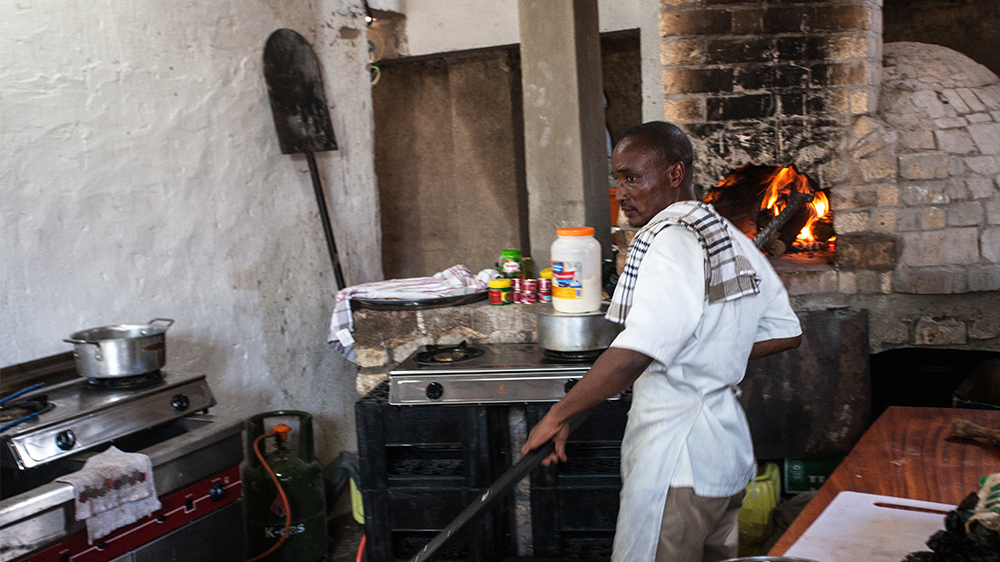 Beni, Democratic Republic of Congo – Leonard Maliona leans over the counter at Ishango Restaurant, peering past the chef’s prep station into a brick pizza oven.

The oven is slow to fire up today – the staff are still being trained – but the thin crust should cook in 8 minutes, Maliona explains. It’s a short time to wait, he jokes, when the ultimate aim of the pizza is to end decades of civil conflict in his home country, the Democratic Republic of Congo.

Maliona, a 29-year-old architect-cum-entrepreneur, is light-hearted when it comes to pizza but intensely focused on making an impact in his home region of eastern Congo, which – despite 17 years of a United Nations peacekeeping presence – is still marred by instability, lawlessness, and constant turnover of rebel groups.

Known as Leon to friends, Maliona grew up in the sister cities of Butembo and Beni – nearly 400 kilometres north of the provincial capital of Goma.

In recent years, residents here have endured massacres supposedly perpetrated by the Ugandan rebel group ADF-NALU. New reports suggest that local militias and members of the Congolese military may also be partly to blame for hundreds of civilian deaths between 2014 and 2016.

Beni sits just west of Virunga National Park and the two cities have long been home to a small, business-minded Congolese merchant class.

Maliona saw the transformative impact of local businesses first-hand when his parents opened the first grocery store in the region, a shop which later expanded into a chain of 10 shops in and around Beni.

Educated in Kenya, he became a graduate architecture student in the UK, and grew frustrated when he read headlines from home about the consistent failures of domestic politicians, foreign aid, and international intervention in eastern DRC. In 2012 – an architecture degree from London South Bank University in hand – he moved back to Beni, hoping to foster business-driven change.

“If you talk to young people in Congo, they all want to be a politician or work at an NGO,” he says, with a sigh. “No one dreams of creating new businesses. Our whole society cannot be NGO jobs.”

“We have plenty of politicians. We very seriously need more leadership in business.”

Ishango is tucked away behind a one-storey office building, down an alley blocked by a sheet of corrugated tin. It is part pizza parlor, part bar, part community centre and soon-to-be part nightclub.

“It’s kind of a soft opening these last few months. We’ll have a sign soon,” Maliona says, sheepish about the shabby entryway into a space that is meticulously kept and thoughtfully designed.

Today, as the butcher delivers freshly killed chickens and goat for the evening barbecued brochettes , Maliona’s lunch conversation with business partner Floris Buter jumps frenetically from jokes about the merits of peppers as a pizza topping, the current state of their freshly-cut green roof, and the importance of their locally-sourced bamboo and eucalyptus furniture.

The concerns may seem odd priorities for the native son of a city that has seen 550 civilians killed in massacres over the past 18 months.

But the earnest, high-energy Maliona truly believes the first brick-oven pizza parlour in the region is an effective weapon in the fight to move beyond the cycles of violence that have plagued eastern Congo.

On a basic level, he says, providing Beni residents with a hip space to try international food will expand their palates and their minds beyond the limited opportunities of their circumstances.

“I wanted to create a space where people could feel comfortable to come and sit and talk about their futures, to envision solutions,” he explains. “If we just focus on what we have now – war – we’ll never do anything. I believe dreams can drive growth.”

The focal point of the space – a 5-metre-high Ishango bone – is a nod to his lofty goals. Largely considered to be a tool of ancient mathematics and discovered in eastern Congo in 1960, Maliona hopes the Ishango bone, thousands of years old and with its mysterious markings, will serve as a visual cue to help locals tap into their dreams.

He emphasizes locally-sourced material in his designs to remind patrons of the potential within the region and included in functional workspaces and free wi-fi throughout the space.

Maliona acknowledges that he serves as a walking success story, an embodiment of this “untapped Congolese potential”, but shies away from attention. He stresses that his only aim is to give locals physical and mental space to build a better future.

He is hopeful that their dreams will be profit-making endeavours, providing alternatives to conflict-driven odd jobs, which range from joining and collaborating with rebel groups to informing on neighbours suspected of doing so.

For Gertrude Kahindo, a local hotel owner and the president of Beni’s commerce federation, the early success of Ishango “signals that people are not fearful to come out”.

“These kinds of projects promote peace, and without active commerce there is no peace,” she says.

The clientele at Ishango varies widely over the course of an afternoon and evening; 20-somethings in skinny jeans, fedoras, and flat-brimmed hats emblazoned with “Brooklyn” drink coffee and cluster around laptops watching YouTube videos.

A Congolese army colonel strolls in for a beer with two bodyguards and a 10-person posse. Families come early, young people stick around past cocktail hour, mostly drinking local beer.

Maliona has set his sights beyond inspiring the locals and with Buter, hopes Ishango will drive competition for Ishango within Beni’s hospitality sector.

Buter oversees day-to-day operations at Ishango. He moves at a frantic pace from the restaurant’s cafe to bar area, greeting waiters and lamenting the lack of spicy sausage on his pizza today.

“The private sector is a way to boost things. If you pump in aid money all the time, development goes away because people don’t have a stake. It’s a temporary solution. If you create a competitive economic situation people benefit locally and it creates a permanent economy.”

“I hope now there will at least be some nicer bars in Beni trying to steal our clientele,” Maliona chimes in.

Maliona knows that long-term economic development will take more than pizza and free wi-fi. He currently oversees six active construction sites in Beni, including the renovation of a local university, a bilingual Christian school.

He is focused on ventures that he hopes will attract regional and international investors to eastern Congo, like a new soap factory 35 kilometres outside of Beni, which will make soap from locally-grown palm oil.

Maliona conceptualised and designed the factory – called SICOVIR – and he says: “It will have a huge impact on the region because all of the soap we have is imported.”

“It’s crazy!” he insists, adding: “It’s a huge loss for the country when you consider Congo used to be among the top countries exporting palm oil until the 1970s.” The potentially exploitative mass cultivation of palm oil in DRC remains a matter of debate among environmentalists and SICOVIR plans to start small, with a regional focus.

“It’s a local product, made by locals. The capacity of the factory is large enough to provide soap for all of eastern Congo,” says Buter.

Backed by Maliona’s family and a group of private investors, the factory is set to open in the next several months in Mutwanga, a small village in Virunga National Park. Residents there stand to gain the most from the possible success of SICOVIR and the factory will employ upwards of 200 locals.

Maliona claims the project’s backers are not worried about the potential downside of opening a new venture in areas under the threat of armed groups.

“The risk is worth it,” he says. “They know commercial enterprises can push away insecurity. There is more to gain by investing now than to wait for peace to come and investing then.”

While she is not keen to sample the pizza at Ishango – “I’ll stick with my Congolese food” – she echoes Maliona’s other passion, the idea that entrepreneurship might just be the way out of conflict in Beni.

“Create jobs and you’ll decrease banditry. You create a future.”