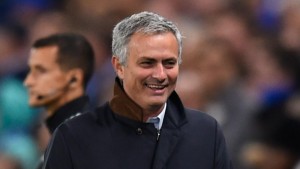 The ex-Chelsea man has been named the new Super Eagles’ handler, as he affirmed he was pleased to coach the three-time African champions

Jose Mourinho has been named the new head coach of Nigeria following the departure of interim Samson Siasia.

Mourinho signed a four-year contract to take charge of the Super Eagles, while Mutiu Adepoju, Kanu Nwankwo and Peter Rufai join him as his backroom staff.

The former Chelsea coach will be tasked with qualifying Nigeria for the 2018 World Cup having missed out of the 2017 Africa Cup of Nations billed for Gabon.

The 53-year-old had been linked with Manchester United job but has agreed a deal with Nigeria which is due to last until 2020, after Sunday Oliseh quit his post on February 25, 2016.

“I have the pleasure to confirm I have committed to a legendary African side, with the massive challenge of qualifying for the Russia 2018 World Cup,” Mourinho told Goal.

“I am lucky because for years I had the fortune to coach big teams like Chelsea, Inter Milan andReal Madrid, and now I have the opportunity to coach another big team like Nigeria. It is an honour and I want to keep winning.

“We have a duty to prove we are the best team in Africa and also do well at the 2018 World Cup.

“I’d like to thank the Nigeria Football Federation for believing in me and with their backing, I am confident that we can build a stronger Super Eagles,” he concluded.

Mourinho will be presented at a media conference on Friday at the Abuja National Stadium.