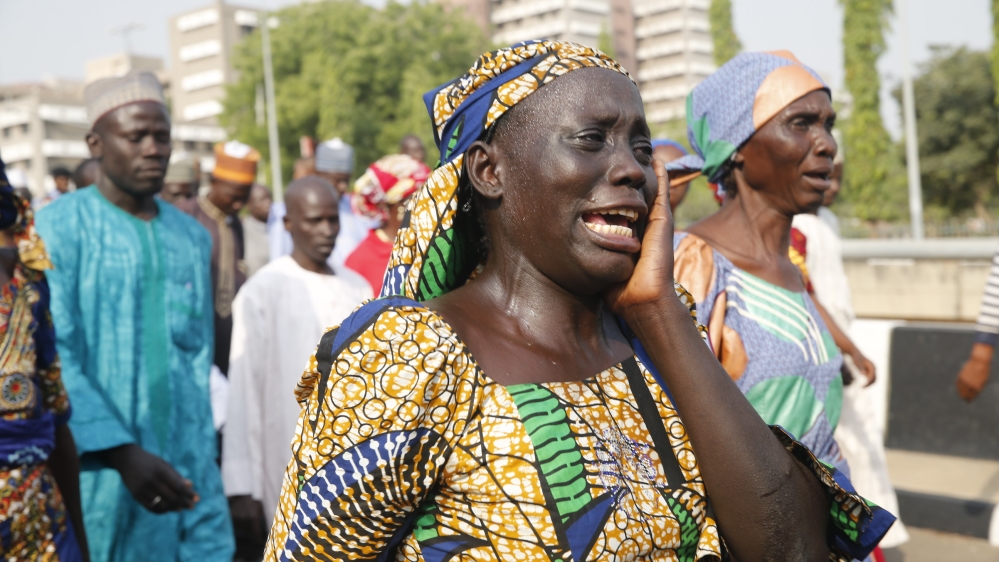 A new video has emerged showing some of the missing schoolgirls kidnapped by the armed group Boko Haram in Nigeria two years ago, providing hope to parents that their daughters are still alive.

About 15 girls featured in the video obtained by the Nigerian government, saying they were from the Government Girls Secondary School in Chibok and pleading with the government to cooperate with Boko Haram on their release.

Various false leads have raised hopes of finding the girls but their whereabouts remain unknown.

Rifkatu Ayuba and Mary Ishaya said they recognised their daughters in the video, while a third mother, Yana Galang, identified five of the missing girls.

Al Jazeera’s Yvonne Ndege, reporting from Abuja, said the video shows 15 girls huddled in a group against a wall.

“There’s a voice-over, there’s a man speaking asking them to state their names and other details, including the date that the video was taken, and they say it’s the 25th of December 2015.”

Ndege added, however, that Nigerian authorities are treating the video with “extreme caution”.

“They are treating it seriously, they don’t want to underplay its significance but they’re saying ‘let’s be careful, let’s tread with caution,’” Ndege said.

“The campaigners and the families, however are holding on to this as the glimmer of hope that they’ve been looking for the last two years and they are urging the Nigerian government to follow up in every way possible the authenticity of this new recording.”

“The girls were looking very, very well,” Galang said in a telephone interview with the Thomson Reuters Foundation after viewing the video at a screening organised by local officials in Maiduguri, capital of Borno state in northeast Nigeria.

She said: “They were definitely our daughters … all we want is for the government to bring back our girls.”

The three mothers were invited to the viewing by the chairman of Chibok local government area.

Al Jazeera’s Ahmed Idris, reporting from Chibok, said that not much had changed in the area two years on and the relatives were not confident of seeing the girls back home soon.

“We met a woman who said she didn’t see her daughter in the video but saw her niece,” he said.

“All these wranglings and delays meant she wasn’t confident the girls would be home any time soon. The thing they are hanging on to is hope and prayers that somebody somewhere will do something to get these girls back home.

“The mood in the town is that of resignation, anger and frustration.”

The kidnapping of the girls has become a political issue in Nigeria, with the government and military criticised for their handling of the incident and failure to track down the girls.

The government blames the previous administration for lack of progress, while activists are asking for Western countries to help with the investigation.

No member of Boko Haram was visible in the video and local officials were not immediately available to give details on how they received the video.