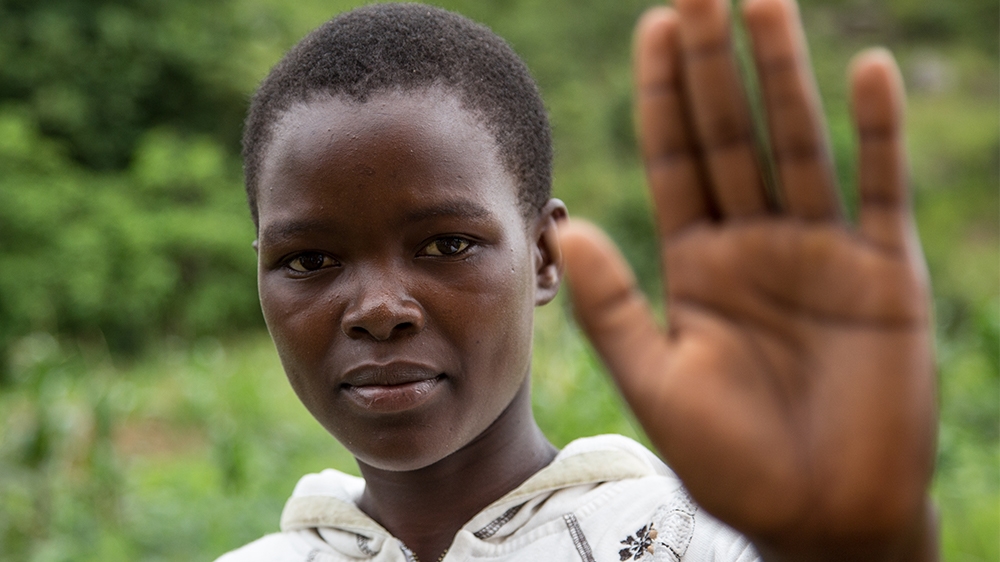 Chimoya, Malawi – Small fists fly towards throats, knees jerk from under pinafore dress hems up to groin level and two-pronged fingers shoot for the eyes as high-pitched shrieks of “No!” echo through the playground at Makankhula primary school.

“We use the knee to hit the groin of the assailant, to disable him, and then we run,” explained Alinafe Kambalane, who teaches self-defence to girls in 46 schools across Malawi’s Dedza district.

“They have to shout ‘No!’ and they have to run away,” Kambalane added, beaming with pride as her little warriors spring to life.

It is peculiar to watch the faces of otherwise shyly smiling girls harden into scowls or grimaces – eyes sharpening or widening in defiance – as they picture imaginary aggressors.

But in this small slice of southern Africa, where six exasperated child protection workers glumly described the rape of minors as “a social norm”, “normal”, “the norm” or “just culture”, putting the power to stop it in children’s hands is a necessary reality.

In little over a year, and with only 50 instructors, small Kenyan charity Ujamaa has trained almost 25,000 Malawian children to fight the sexual abuse that is commonly committed by those they most trust.

“Most girls are raped or sexually assaulted by people they know,” according to Martin Ndirangu, who runs Ujamaa’s Malawi project. “Boyfriends or partners, family members and teachers being among [the] highest perpetrators.”

Being told that the unwanted fondles and forced sex acts constitute abuse comes as a revelation to many children.

Fazani Alikangel, 14, said the catcalls from married men which started two years ago on her way to school were “traumatising”. Like the groping boys at school, she didn’t know how to stop them.

Tiyamike Thole, 17, ended years of abuse thanks to what she learned at Ujamaa. One day, she simply poked one of the group of boys waiting to grab her on the walk home from school in the eye.

“The others said, ‘What happened to you? How did you become this fierce?’”

The boys tried another day and she poked one again. Since then they have backed off.

Godfrey Ateftali, 17, said Ujamaa skills helped him to stop a rape on his way home from school.

“I used my voice and said, ‘Hey! Police are coming!’ and the boy left the girl and ran,” Ateftali said.

Backed by the United Nations Children’s Fund, UNICEF, the Ujamaa network, which started in some of the Kenyan capital Nairobi’s toughest slums, now extends to more than 250 schools across seven districts.

At the end of the course, Ujamaa gives pupils details of referral services, which include an anonymous rape survivors’ group.

Preliminary findings from Ujamaa’s Malawi survey of 11,460 girls under 18 show that on average, one in five has been raped. The figure – currently under validation by John Hopkins University in the US – in two Malawian districts is one in three.

Many girls tell Ujamaa instructors the “shocking stories” that they are too afraid or ashamed of telling friends or family, Kambalane said.

“They live with the trauma inside them for years,” and when the confessions come tumbling out, Kambalane cannot show pity, in case they clam up again.

Despite the stigma surrounding rape, there is little anonymity elsewhere.

Local newspapers are filled with sex crime reports that give the names of victims or their parents, schools and villages. Reports about teachers impregnating students, police officers raping girls in custody – including those who might be placed there to escape sexual abuse at home – paedophile magistrates, and molesting stepfathers are widespread.

Yet child rape in the form of incest or by community members can be deemed acceptable in the name of “cultural practices”.

In some areas, fathers are known to sleep with their daughters if their wives refuse sex or fall sick, or to determine how much to charge for her “lobola”, or dowry.

Parents might marry off their young daughters to older men without the girls’ consent under a practice called “kupumbira”, in exchange for a tokens such as a hoe or to pay debts.

Men justify the rape of innocents – especially virgins – to “cleanse” sicknesses, including HIV, clear curses, or bring fortune, and of widows to make sure the death of their husbands doesn’t extend to other men.

As for fighting back, “there have been people opposing this as it’s not respecting your elders,” said Brendan Ross, who sits on Ujamaa’s board.

Malawi’s female magistrates and police recently voiced concern about the spike in cases of rape, which last year became Malawi’s most reported crime.

The increase in reports could be a positive sign of parents wanting to put abusers behind bars rather than keep the matter quiet.

Unicef is trying to encourage more people to report abuses by bringing social workers, police, medics and a justice officer under one roof in One-Stop Centres.

At the centre in Malawi’s second largest city Blantyre, 90 percent of abuse cases are sexual.

Speaking above the screams of a small girl in reception, social worker Winnie Salama said that she often has to send rape victims back home, even when she knows that it is not physically and psychologically safe.

“When you just start doing it, you just want to take everyone home with you,” including the infants, she said.

But there is nowhere for any of them to go, no matter how small.

“It’s been years now and I don’t see anyone doing anything about it,” Salama said.

Dorothy, 14, came to the centre with her mother to provide the necessary medical evidence and police report about the elderly man who raped her on her way to the family’s outside toilet.

But the police didn’t come and the man hasn’t been arrested.

“I feel so bad when I see him around [the neighbourhood]. I want him to be arrested as what he did to me affected me deeply,” she said.

“The most vulnerable age group is aged 9 to 13,” said the centre’s police officer Emmanuel Kalumbu, who only has the power to refer cases to the local police station and not to make arrests.

He sees the few child rapists that police hear about, arrest and have evidence to convict, walk free from trials or receive a sentence of a few months.

“They need to be punished and given stiffer penance so that we can say, ‘OK, we are trying to protect our children’,” Kalumbu said.

“There’s no link between what is happening in the court and the One Stop Centre,” said child justice officer Godfrey Chavula.

Last year, he saw “twenty-something cases a month” at the Blanytre centre. Only 45 made it to court.

Corruption and chronic delays often kill cases, as witnesses drop out or families opt to accept bribes from rapists rather than pay them to officials.

The uncle of Elisa speaks in strained tones as he talks about his niece, an HIV-positive orphan and the victim of two rapists by age 12.

The first, “gave her 50 kwacha (US 10 cents) and told her not to tell anyone or he would kill her with a knife,” he said.

The second, a neighbour who attends the local church, repeatedly lured Elisa to his home and raped her. Once, he gave her 20 kwacha. The next time it was seven macadamia nuts. They still see him at church.

Both men have children. Neither man used a condom, and the family used the centre’s services to gather the necessary medical and police evidence.

With pleading eyes, Elisa’s uncle asks how he can keep her safe from sexual predators. “It’s killing me,” he said.

Through a two-way mirror, centre staff watched the latest victim, aged seven, being ushered into a brightly-coloured and well-stocked playroom. She looked utterly lost, staring into the distance and frowning as a sibling of another victim babbled and clonked toys together.

Ujamaa believes that only prevention can cure a “global rape epidemic” that in poor countries such as Malawi, equates to hundreds of thousands of victims a year.

“There’s no system in any country that could deal with that caseload,” said Ross, adding that per pupil, Ujamaa costs “the equivalent of a vaccination”.

The classes are often a gift that keeps on giving.

Thole has already taught her “proud mother” and step-sister what she learned so that they can also benefit. In Kenya, half the female pupils had used their skills to prevent sexual assault within a year, and rape incidences in Ujamaa schools fell by almost half.

“I feel a lot more powerful now, even in my studies, and that I can say, ‘No’,” said Alikangel, the 14-year-old pupil.

When asked to demonstrate, she adopted the eye poke pose.