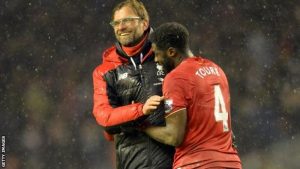 Liverpool manager Jurgen Klopp says Ivory Coast defender Kolo Toure is still part of his plans, but needs to talk to him about his future.

The 35-year-old will be out of contract at the end of this season but is yet to discuss a new deal.

“Kolo is a very, very important player for us, even when he doesn’t play,” said the former Borussia Dortmund boss.

“He’s one of the most impressive people I have met, but now is not the right time to speak about Kolo’s future.”

The former Arsenal and Manchester City centre-back has played 19 of his 21 matches this season since Klopp arrived at Anfield in October to replace Brendan Rodgers.

“When I came here Kolo had a few problems injury wise but now it looks completely different and that’s good,” the German continued.

“How I have heard things is that a big part of Kolo’s future is at Liverpool. So I’d say everything is ok.”