In our series of letters from African journalists, film-maker and columnist Farai Sevenzo considers the implications for Zambia of recent riots.

Six bodies of murdered citizens have turned up in the Zambian capital Lusaka in the last month.

It was widely reported that the victims had been mutilated and were missing their hearts, ears and private parts.

At the heart of the matter lay the darkness of ritual killings – when people are murdered for their body parts in the malevolent belief that in the hands of powerful sorcerers, these organs can be employed as charms to enhance political ambition and improve the lot of individuals in the pursuit of business and money.

While no African imagination is bereft of these tales, the practice of ritual murder has been shocking because of the frequency of its occurrence.

Albinos have borne the brunt of it in Burundi, Tanzania and now Malawi – where just this week police arrested 10 men for allegedly killing a 21-year-old albino woman.

Other cases of ritual killings have been reported from Nigeria to South Africa.

As a short cut to riches and influence, ritual murders have never been proven to work or they would have long replaced the tried paths of education, ambition and sweat.

What they do instead is polish “Heart of Darkness” labels for constant use on a continent awaking to her full potential and the promise of a 21st Century free of superstition.

The consequences of these murders were to prove far more serious for President Edgar Lungu’s Patriotic Front (PF) government.

The residents of Lusaka’s townships of Zingalume, George and Matero – where the bodies were discovered – attacked the police with stones for not doing enough to protect them from the ritual murderers.

But far more insidious enemies have been stalking Zambia’s poor – hunger and unemployment.

The collapse of the Zambian copper trade as well as the kwacha currency and the onset of the southern African drought could easily be detected in the motives of the subsequent riots which saw xenophobic attacks on foreigners in Lusaka’s high-density suburbs.

The rioters took what they could to eat and blamed foreign shopkeepers for the ritual murders.

The “foreigners” under attack had spilled over the borders of the Democratic Republic of Congo and then into Zambia after the Rwandan genocide in 1994.

They were mainly Hutu refugees who had stayed on in Zambia, despite the UN refugee agency declaring Rwanda a safe destination for their return back in 2013.

There is nothing glamorous about being a refugee – for 22 years some 6,000 Rwandans have wandered stateless in Zambia without passports and legal status.

They then mingled with the locals in townships just like Zingalume, which are by no means upmarket addresses, and set up little shops to trade and survive.

It is in xenophobia’s nature to point the finger of blame at those foreigners who own something, who show evidence of money where there is none to be found.

The former Rwandans found themselves seeking shelter in churches and assurances for their safety from the Zambian government with more than 700 displaced after two days of rioting.

In the short and dangerous history of xenophobia in South Africa and now Zambia, the word “foreigner” invariably refers to black Africans, not to the Portuguese escaping Lisbon’s meagre prospects for the oil fields of Luanda, or the Chinese who run Zambia’s copper mines, supermarkets and chicken farms.

Afrophobia is our xenophobia; it appears to be as African and as regular as ritual murders and deserves to be shunned.

Zambia’s history of welcoming Africans without a home is legendary.

South Africa’s African National Congress (ANC) was based in former President Kenneth Kaunda’s Zambia as they fought apartheid, as were Zimbabweans fighting white-minority rule in what was then Rhodesia.

At the centre of President Lungu’s dilemma is the economic crisis now gripping Zambia as copper mines fold and the rains refuse to fall.

Youth unemployment and a rising cost of living seems more likely to be the roots of future riots, not ritual murders.

A Global Hunger report has grouped Chad, the Central African Republic and Zambia as the “three most hungry countries on the global hunger index”.

Mr Lungu became president in January 2015 following a rushed poll necessitated by the death in office of Michael Sata.

Zambia’s gloomy economic outlook has him trying to put out fires on many fronts as the country prepares for general elections due in August 2016.

The move to deploy soldiers to the townships is being seen as a calculated government plan towards voter intimidation, not a means to restore security.

It is unlikely that any amount of soldiers on the streets will make this an easy ride for the PF government.

History records only too well how this nation responds to hunger.

Thirty years ago Mr Kaunda, Zambia’s founding president, tried to face down riots that had began in the mining towns of Kitwe and Ndola at the doubling of food prices.

By June 1990 the riots had reached Lusaka, the soldiers sent to quell them attempted a coup and Mr Kaunda was to be defeated at the ballot box by 1991.

The ritual killings may have left six citizens dead and mutilated, hundreds of refugees displaced and soldiers on the streets; but as long as the economic crisis continues to grip Zambia, further riots may come to Lusaka sooner than the rains. 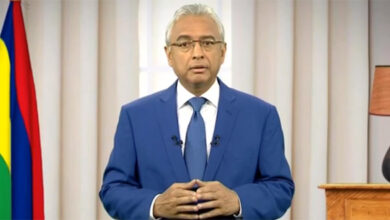 Mauritius:Well-being of the Population and Prosperity of the Economy are Government’s Priorities, States Prime Minister