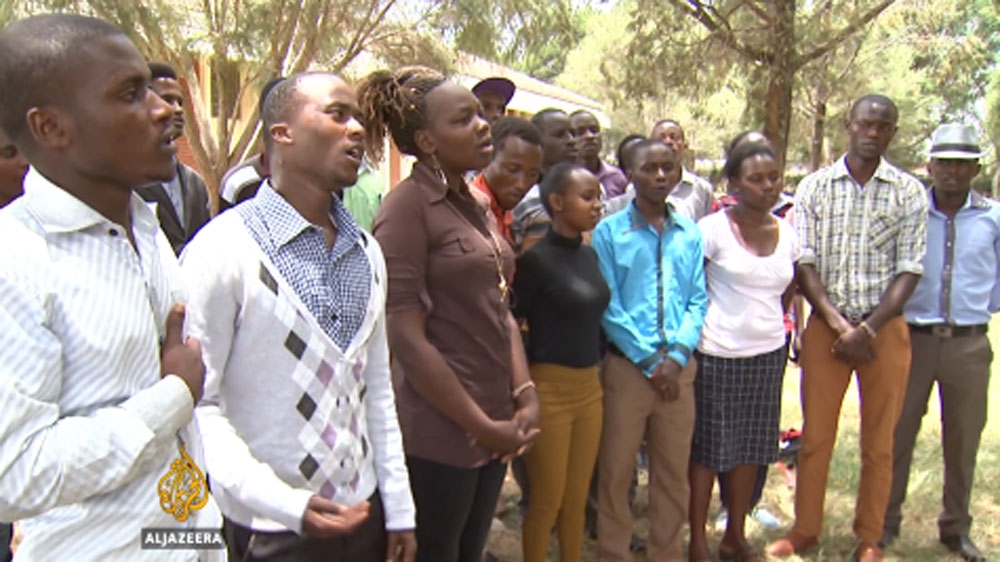 Students who survived the massacre at Garissa University in Kenya last year are still struggling to cope with the trauma of losing their friends who were shot and killed by the al-Shabab fighters.

A year ago, attackers from the Somali armed group stormed the Garissa University College campus in the town of Garissa in a pre-dawn rampage, killing at least 147 students.

Tossing grenades and spraying bullets at cowering students, the attackers initially killed indiscriminately. But they later freed some Muslims and instead targeted Christian students during a siege that lasted about 15 hours.

The al-Qaeda-linked group said the assault was launched in revenge for Kenya sending troops to fight al-Shabab in Somalia.

Mercy Wanjiku, who was hiding inside the university throughout the attack, told Al Jazeera the harrowing story of how her friend Carla was killed in the attack.

“She was pregnant…. She started crying. That is when they realised there was somebody so they went direct to that room. Then we heard the cries stop at once,” she said.

There were only four police guarding the university campus at the time. Many people were left wondering if the attack could have been prevented.

The university’s former principal, Hassan Sheikh Ali, says despite several requests for extra security months before the attack, the government chose to ignore his call.

“It has led to flight, we don’t have our own teachers. It has left more mess in the economy. It has led to more fear, more suspicion between us, so literally we are in a quagmire,” he told Al Jazeera.

Security analyst Ahmed Bashir told Reuters news agency that appeals for parents to return their children to the university must be accompanied by a visible increase in security on the campus.

“Nobody thought that such an attack could happen inside a town like Garissa. So yes, lessons have been learned in terms of ensuring that the security forces are proactive and not reactive,” he said.

More than 400 people have been killed by al-Shabab in the east African nation since April 2013, including some 67 people who died in an attack on a shopping mall in the capital, Nairobi, in September of that year.

Mercy Wanjiku, along with most survivors, was transferred to another university in western Kenya. They say they never want to go back and will never forget what happened that day.

The university reopened for part-time students in January this year, nine months after the attack. The university authorities hope that students enroll from all over Kenya, but new registration has been few and far between.