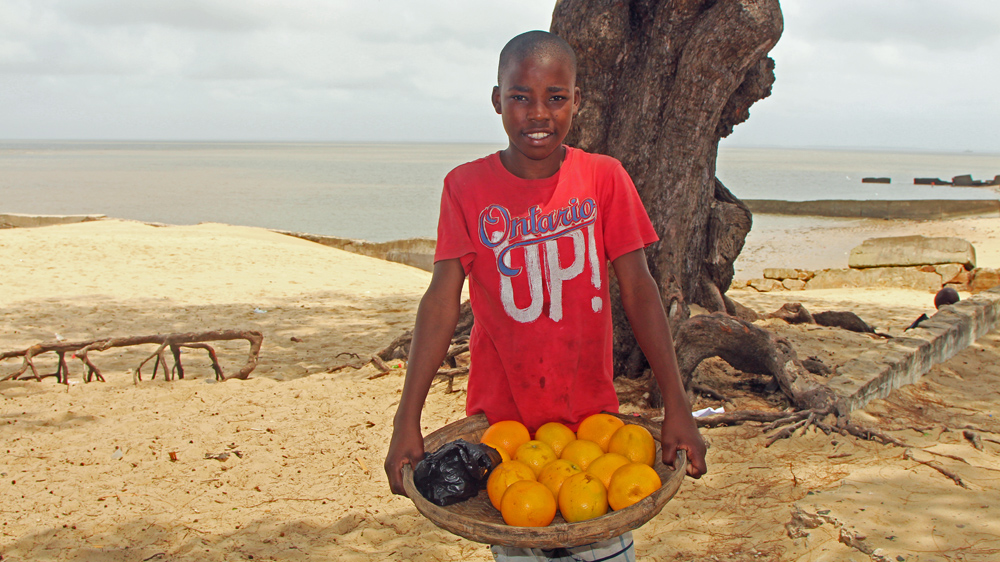 He places the fruit in a basket and walks on to the busy, palm tree-lined streets of the city to sell them.

Candrinho has followed this routine for the past three years, six days a week.

“I work because I need to buy food for my sisters and me to eat. If I don’t work we will go hungry. I only take Sundays off to go to church,” Candrinho told Al Jazeera as he prepared for the long day ahead.

Candrinho had to start working on the streets of his seaside city after his father and mother divorced. His mother remarried and her new husband didn’t take kindly to Candrinho and his eight-year-old sister. Shunned and mistreated, the siblings found themselves under the care of their uncle but on one condition – Candrinho must work to support himself and his sister.

Candrinho accepted his fate and duly dropped out of school.

Every two weeks his mother-in-law gives him 90 oranges to sell and he needs to sell them all in 14 days to have a roof over his and his sister’s heads and two meals a day – breakfast and dinner. He sells each orange for the equivalent of 20 US cents.

“Every day before going home I stopped by the church to pray and ask for a better life because doing this is very hard,” Candrinho said, as the first signs of traffic appeared on the main road, signalling the start of his day.

Both Candrinho and his sister Aninha dropped out of school because they couldn’t pay for their uniforms and books.

They are not alone. Across this southern Africa country tens of thousands of children face a similar fate – working instead of learning.

Even though Mozambique, a country of more than 25 million people, has one of the fastest-growing economies on the continent, the wealth hasn’t trickled down to everyone, just yet. The country is home to one of the biggest school dropout rates in the world.

More than half of primary school pupils do not complete school. Only 47 percent complete primary school, with UNESCO saying in 2012 that 1.2 million children drop out of school.

Despite impressive yearly growth figures of more than 7 percent, more than half of the population – 54 percent – lives below the poverty line, according to the World Bank. Parents facing tough economic conditions will send their children out to work rather than to school.

The fact that most of the country’s population lives in the countryside exacerbates this situation, as economic conditions are more strained in rural areas where it is difficult for parents to send their children to school.

Mozambique’s capital Maputo lies some 2,000 kilometres south of Beira. It has seen a recent economic boom and a flow of money, but in the city’s Mafalala neighbourhood it is common to see children working or playing football on dirt roads during school hours.

Arnaldo Djedje stood next to a game machine with a wad of cash in his left hand. The 14-year-old was surrounded by kids pushing to get a chance to play the machine. Djedje had dropped out of school two years earlier.

“I have been working as the manager of this game machine since 2013. It belongs to my uncle. I left school because my family could not raise the money for school,” Djedje said.

“I live with my grandmother and don’t get paid for working here. I get a place to sleep and food. When I get older I will like to be a soldier,” he said with a hint of a smile.

Djedje left school before he could learn to read or write.

Twenty minutes’ walk from the game machine booth is where Djedje calls home. His parents divorced and, with employment hard to come by in Maputo, Djedje’s father crossed the border into neighbouring South Africa, where he does menial jobs to earn some money. The little he sends back helps to pay for rent and send Djedje’s younger sister to school.

Djedje’s elderly grandmother is left to look after the children.

“We had to choose which one to send to school. His father doesn’t have much money. So, we kept the daughter, who was doing better in class, in school. If we get money we hope to send him to boarding school,” Djedje’s grandmother, Almerinda Sambane, explained standing outside their one-bedroom stone house.

Mozambique came out of a brutal 15-year civil war in 1992, which started only two years after the former Portuguese colony gained independence in 1975. The war left an estimated one million people dead and the education system on its knees.

But since the government struck oil and gas off its shores it has been heavily investing in the education sector, building hundreds of classes a year while also training thousands of teachers.

According to the United Nation’s children’s fund, UNICEF, Maputo abolished school fees and introduced free text books in schools across the country in an effort to ease the pressure on poverty-stricken parents. This has led to school enrolments jumping from 3.6 million in 2003 to 6.7 million in 2014.

“Today we have about seven million children in the education system, although it is true that we do not have the conditions to give a classroom for each kid. We cannot have all schools with desks, with computers, with laboratories,” Jorge Ferrao, the minister for education, told Al Jazeera.

“We possibly need 38,000 classrooms and we are building a thousand classrooms per year. If we do that, dropout levels will find an answer. We have to give a seven-year education to our children as defined in our constitution,” Ferrao added.

The government might succeed in building thousands of new classrooms, but unless the economic realities of thousands of families change, many children like Candrinho could remain out of the school system.

“I want to go back to school and study to become a priest. My sister wants to become a nurse. But now we have no money for that,” Candrinho said.

The post In Mozambique, the children too poor to learn appeared first on African Media Agency.

OPINION: If Eskom is oxygen let us breathe.