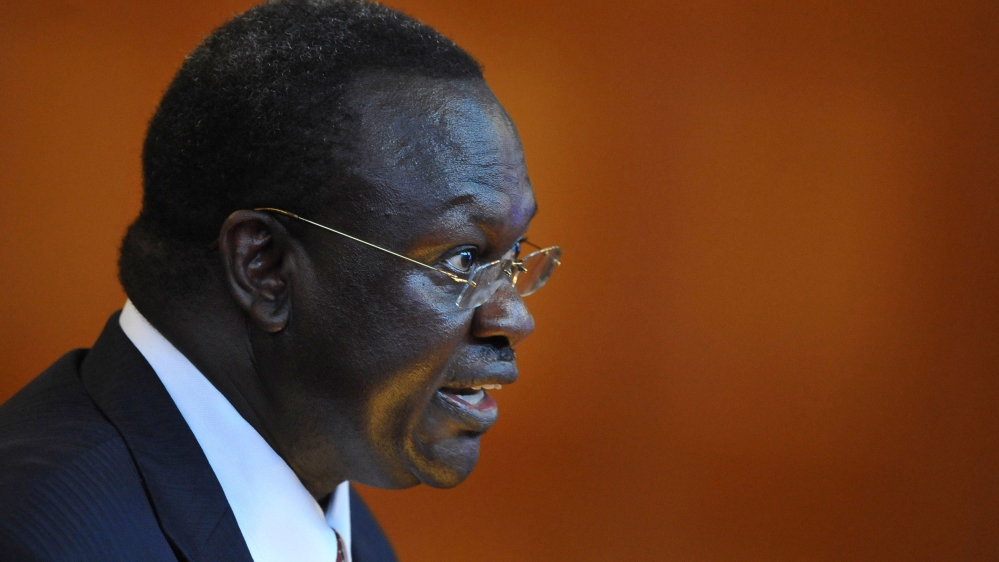 South Sudanese rebel leader and former vice president Riek Machar has accused the government of blocking his return to the capital to form a unity government after two years of civil war.

Machar was supposed to return to Juba on Monday as part of a deal to end a conflict that has killed more than 50,000 people and forced more than 2 million from their homes.

But, two days later, he has yet to take off from neighbouring Ethiopia, where he chartered a plane for his officials and a large number of troops.

Al Jazeera’s Anna Cavell, reporting from Juba, said that both sides have been accused of shifting the goal posts of the hard-won peace agreement that cleared the way for Machar’s return.

“This is now the third day of, what seemed in Juba, complete chaos,” she said. “It is difficult to get any clarity on what the real issue is.”

The country descended into conflict in December 2013 after President Salva Kiir accused Machar, who he had sacked earlier that year, of plotting a coup. Fighting initially broke out in Juba but, after Machar and his supporters fled the city, it spread.

Since then, the war has taken a ruinous toll across the country, with United Nations agencies warning of famine as civilians died from hunger, and accusations that child soldiers have been used by both sides.

‘There are no missiles’

A 1,370-strong force of soldiers and police loyal to Machar arrived in the capital last week ahead of his expected return.

Cavell said that, under the agreement, he was entitled to bring additional security forces to those already in place. But the government said Machar was also asking to bring extra weapons with his contingent, including rocket-propelled grenades.

“As I understand, that’s why authorities here are preventing him from flying,” she said.

“There are no missiles with them,” he said. “There are only light personal weapons, light machine-guns. This can be verified by the Ethiopians who have taken charge. They have locked weapons in boxes and they are now in the airport in Gambela.”

The government information ministry said Machar was also trying to take too many men, accusations he again denied.

“We have agreed to take to Juba 2,910 soldiers and security officers,” he said. “Up to today we have 1,370 men in place in Juba. There are only 260 soldiers accompanying me.”

The presence of Machar’s military chief of staff, Simon Gatwech Dual, appeared to be another sticking point.

The information minister, Michael Makuei Lueth, said on Tuesday that Dual’s plane was not given clearance to fly to Juba because it had not gone through the proper channels.

“[The] chief of staff’s official place to work is Juba not Pagak,” Machar said.

“This is part of the agreement unless you change the agreement. I don’t think the issue is the chief of staff. They don’t want us to go to Juba. They are obstructing us [from going to] Juba.”

The accusations from both sides will cast doubt on their ability to form the agreed unity government and end a war that began just two years after the world’s youngest country seceded from Sudan in 2011.

Cavell said that, with neither side prepared to give in, the country would remain in limbo.

“I want to go to Juba, I just need permission for the plane to land in Juba,” Machar said. “Once the government allows the plane taking our security elements, once it allows them to land, we are ready.”