In central Africa, citizens are using social media to build democracy. Here’s how. 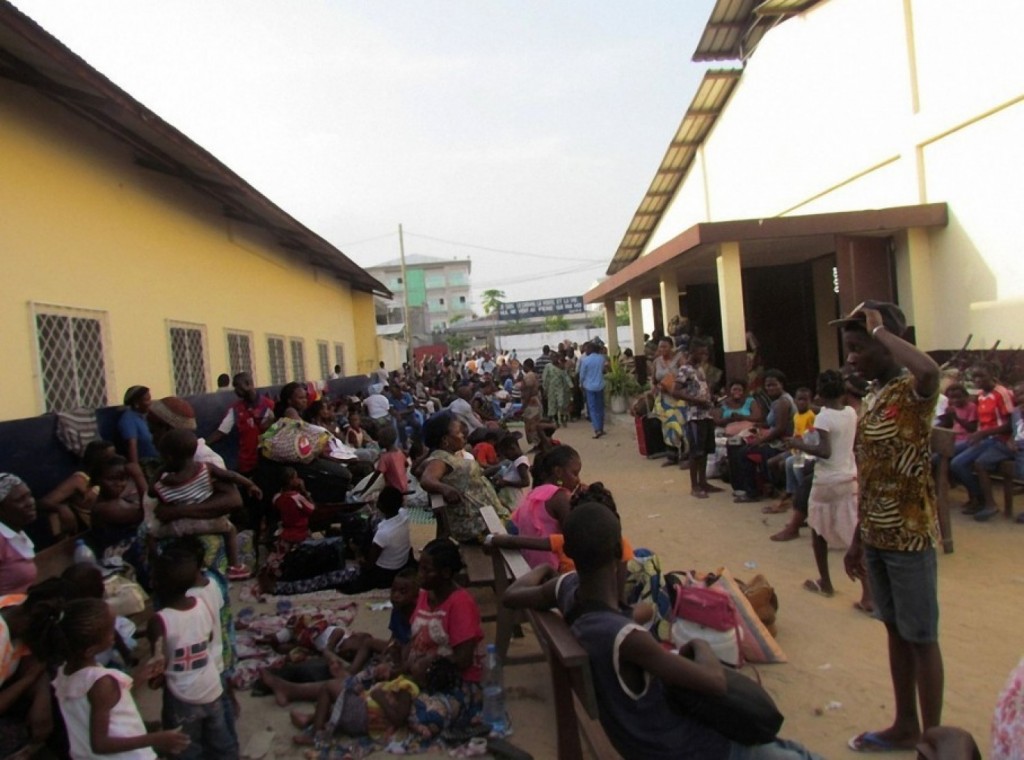 Congolese displaced residents from the southern districts of Brazzaville take shelter in a church after fleeing intense clashes between security forces and unknown assailants on April 4. (AFP/Getty Images)

Early Monday, heavy gunfire was reported in Brazzaville in Congo Republic, after disputed elections led President Denis Sassou Nguesso to declare he had been reelected to yet another term in his 32-year rule — continuing a story whose background I will explain in depth below. That fresh fighting reminds us again of the bad news from central Africa, a region that’s also known as the Economic Community of Central African States (ECCAS).

But here’s the surprise: There’s some good news, too.

Why isn’t central Africa as democratic as neighboring West Africa?

The bad news is that compared with West Africa, where 13 out of 15 countriescan reasonably be described as democracies, central Africa has seen little progress in human rights, free speech or democracy. Central Africa is home to most of the continent’s longest-serving presidents, including not just Nguesso but also Angola’s Jose Eduardo Dos Santos, who has spent 37 years in power; Equatorial Guinea’s Teodoro Obiang Nguema Mbasogo, also 37 years; Cameroon’s Paul Biya, 33 years; and Chad’s Idriss Derby, 25 years.

That’s true in part because the region is rich in mineral deposits, forests, and other natural resources. Central African leaders know they can continue profiting from lucrative trade relationships, regardless of how undemocratic they are — because even when governments and corporations condemn those leaders’ undemocratic behaviors, they keep paying for those resources.

What’s more, central African states’ political opposition is fragmented, their civil society weak, and their news media fragile. Central African journalism struggles for funds and works under tough or even draconian press laws. Journalists are too often arrested, killed, or expelled when theyinvestigate those in power or report on corruption.

But social media offers some hope

But here’s the good news. Using social media — especially Whatsapp, Facebook and Twitter — citizens are reviving moribund civil society organizations, energizing opposition movements, exposing human rights violations and electoral fraud, and rebuilding interest in elections among people who’ve become apathetic after decades of electoral fraud. That’s been true in Rwanda and in Burundi, where activists are using social media to expose state brutality, to support activists, and to exchange information. For instance, in Burundi, according to reporting by OkayAfrica, activists and independent journalists have been highly creative in spreading information via Twitter and online, reporting that:

… the best source for news on the ground is the Soundcloud account SOS Médias BURUNDI. Made up of independent journalists in Burundi now too frightened to work openly, the group posts radio clips to Soundcloud, distributing them viaTweets and Facebook posts.

A vibrant online community congregates around this news, analyzing and poking at it in real time. In August, the satirical hashtag #10millionpresidents became its popular rallying cry. The hashtag is a satirical take on Nkurunziza’s rushed third-term inauguration, proclaiming each and every Burundian a president with many participants posting their presidential platforms and images of themselves taking the oath of office.

Below are country vignettes that highlight how, specifically, social media is being used in particular ECCAS nations.

In Central African Republic, social media was central in pushing outPresident Francois Bozize in 2013. Journalists used their smartphones to film the abuses of the presidential guards, especially in their operations in the north. Those images were circulated via Facebook. It enabled citizens in the main cities of Bangui and Berberati, strongholds of Bozize, to see graphic images of torture carried out by the army and in particular the presidential guards.

Images circulated on Facebook are partly the reason why the Seleka rebels’ support increased in CAR. That also contributed to Bozize’s fall, because he no longer had popular support. When the Seleka rebels took over after Bozize, social media activists then used the same method against the Seleka. This time around, journalists and some politicians used both Whatsapp and Facebook to expose the new government’s abuses as well.

Through Whatsapp and Facebook, CAR citizens first discovered the mass graves of people who were killed by the Seleka rebels. That’s also how CAR citizens learned that foreign soldiers — in particular, from Sudan and Chad — had helped the Seleka rebels gain power and were now looting their country.

When the country held its first presidential elections after the conflict, watchdogs used social media to keep the outcome honest. In the first electoral round, Faustin-Archange Touadera finished second against Anicet-George Dologuele. Opposition candidates and social activists threw their support to Touadera for the second round.

And here’s how social media was key. Some pro-democracy activists, journalists and groups fighting corruption used Whatsapp and Facebook to circulate information on how Dologuele’s time as prime minister was marred by corruption. Before the electoral commission could declare a winner, local electoral observers used Facebook and Whatsapp to announce that the president-elect was Touadera, based on firsthand accounts from individual central Africans observing the votes being tallied locally. They used smartphones to film results slips — which made it far more difficult for the centralized elections commission to change the results.

CAR citizens believed that Touadera had been fairly elected, and the nation avoided post-election violence.

In Cameroon, social media activists and opposition parties have teamed up against President Biya’s plan to run for a seventh term in 2018. Using Whatsapp in particular, activists have helped expose severe failings in the country’s health system. Social media outrage prompted civil society organizations to turn out in massive numbers to demonstrate against the death of a pregnant woman who was not attended to at the hospital because she had no money. The government was forced to justify her death on television and radio, something that Cameroon’s government officials rarely do.

So what’s happening, in particular, in Congo-Brazzaville?

In that country, where we’ve just seen violence, democracy activists are relying mostly on Facebook pages to expose human rights abuses and electoral fraud and to revive the political opposition. Congo’s opposition had long denounced the government’s fraudulent election practices — as when, in an October referendum, the government declared that citizens had agreed to throw out constitutional term limits and allow President Nguesso to stand for a third term. But social media had not been widely used before this year’s presidential elections, so there was little evidence to support the fraud allegations.

However, the March 20 elections were different. In the run-up to the vote, activists used social media in two major ways.

First, they used Facebook postings to successfully unite opposition voters behind challengers to Nguesso, after Nguesso’s camp made strategic mistakes. For instance, on social media, citizens posted evidence that the government was systematically arresting people close to one opponent, Andre Okombi Salissa, and that police had beaten another declared opponent, Gen. Jean Marie Michel Mokoko, after beating and tear-gassing journalists who had turned out to cover him.

Second, after reporting on those attacks, pro-democracy activists successfully used social media to convince Congolese to register to vote. Congolese saw via Facebook postings that government-sponsored thugs had attacked opposition party candidates. Meant to intimidate, these attacks produced the contrary effect. Congolese concluded a government prone to vote-rigging might actually be able to be defeated at the ballot box. Otherwise, why would it fear opposition leaders?

That decision to go to the polls was a dramatic transformation in public attitudes, which hadn’t been accomplished before by the government or by such international organizations as the European Union and La Francophonie. Congolese had lost faith in free and fair elections. But as social media reported the government’s several attempts to arrest Mokoko, citizens became highly motivated to vote. They saw the government’s attempts to stop Mokoko as a sign that what had seemed to be an invincible, rigged system was actually vulnerable — and that their votes might actually be recorded.

Let’s look more closely into how Mokoko was created by social media. Unlike Congo’s more established opposition figures, Mokoko doesn’t have a political base or party. No one knows what he stands for, or whether he is a nationalist, leftist or conservative.
Here’s what we know: He is a soldier, a former chief of staff for Congo Republic’s armed forces, and a former U.N. staffer. In the 1990s, he helped Congo organize its first and only truly democratic presidential elections after independence. He announced his intentions first on Facebook and other social media applications, rather than in traditional press conferences or interviews with such French-language news media as Radio France International, Le Monde, or Le Figaro. As a result, he is supported primarily by young people born between 1991 and 1997 who are heavy Facebook and social media users.

Mokoko’s candidacy sparked hope in part because many Congolese were tired not only of President Nguesso but also of established opposition party leaders — and in part because, being a soldier, he could face down fellow soldier Nguesso.

Democracy activists on social media also launched an operation called “Je vote et je reste” or “I vote and I stay.” Voters cast their votes — and then stayed at their polling stations, watching the count and waiting to see the results, in person. After every result was read and signed, voters used their smartphones to film the polling station reports. They sent those results to a parallel electoral commission created by the opposition to monitor fraud and verify official results, headed by Charles Zacherie Bowao.

The parallel electoral commission succeeded — because most activists used the Firechat App, which creates a peer-to-peer network among smartphones via Bluetooth and therefore didn’t rely on the Internet, which the government had shut down. In addition, an Al Jazeera reporter who was in Brazzaville to cover the elections was able to communicate directly to the Internet via satellite — and so her reports on Twitter were broadcast around the world.

Congolese social media activists were thus able to discredit the government when it declared victory on state TV at 3:30 a.m. Why so late? Because the government feared that, since the population already had seen the real results via social media, a daytime announcement would spark riots.

But this attempt to hijack the results failed. When the minister of internal affairs announced that Nguesso had won, he was unable to produce evidence from local polling stations to support that. By contrast, social media activists published online detailed reports showing results by polling stations and regions, and showing that in most areas, the winners were from the opposition. In fact, according to this evidence, the first-round balloting winner was Mokoko, followed by Guy Brice Parfait Kolelas. And Nguesso had not even met the cut-off mark for entering the second round.

What happens now? According to the constitution, the second round of balloting should take place two weeks after the first-round results were known. But Nguesso’s government had already declared a first-round winner and reported no need for a second round. Hence the post-election violence, objecting to what most Congolese accept as outright fraud.

Central Africa has a new tool for democratic revival

Social media will not replace traditional methods for democracy and free speech activists. But in Congo and elsewhere in central Africa, social media is becoming an important tool for democratic revival. Voters can use their phones to document and circulate what they’ve observed. That’s a powerful testament and force for open and fair elections, making clear when a government is intervening through brute force. And in central Africa, it’s giving many renewed hope for change.

*Source Washington Post.Elie Smith, Cameroonian journalist, reporter and translator, is a  visiting fellow at the National Endowment for Democracy. He served most recently as director of the MNTV television station in Congo-Brazzaville.