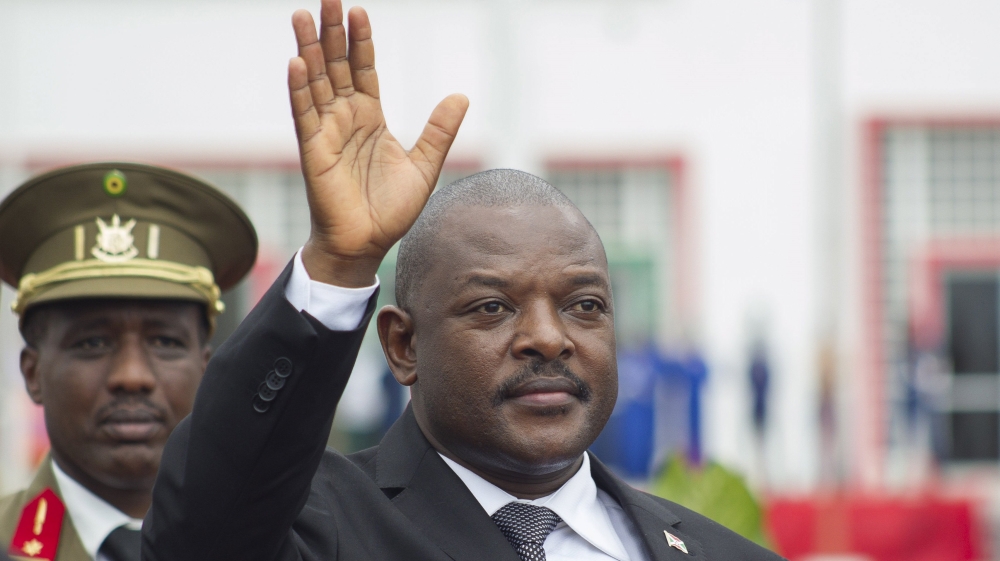 Burundi’s President Pierre Nkurunziza has condemned the killing of a senior army officer in the capital Bujumbura as violence that began a year ago appeared to intensify.

Brigadier General Athanase Kararuza, who was also a military adviser in the office of the vice president, was shot along with his wife and bodyguard on Monday in an attack that wounded their child.

The general’s car came under rocket and gunfire as he was on his way to drop his child at school, army spokesman Gaspard Baratuza told the Reuters news agency.

IN PICTURES: A year of turmoil

“He energetically fought against the coup plotters last year and contributed exceptionally in strengthening peace and security during and after elections,” Nkurunziza said in a statement.

“We humbly pray that with the help of God perpetrators of the shameful acts are arrested and quickly punished according to the law.”

Kararuza previously worked as a deputy commander of an international peacekeeping force in the Central African Republic.

Tit-for-tat attacks between Nkurunziza’s security forces and his opponents have escalated since April 2015 when he announced plans to change the consititution to allow him to run for a third term as president.

He went on to win re-election three months later in a poll fiercely disputed by the opposition.

The UN says that more than 400 people have been killed and more than 250,000 have fled since the violence broke out.

Also on Monday, the International Criminal Court said it would investigate alleged war crimes in the country during the period and that it had received complaints “detailing acts of killing, imprisonment, torture, rape and other forms of sexual violence, as well as cases of enforced disappearances”.

Three armed groups, including one led by officers that attempted a coup in May 2015, have launched rebellions against the government.