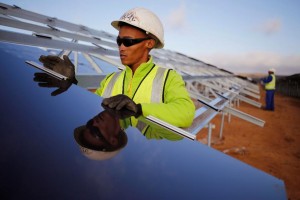 Africa seems to be the only continent today that is regularly referred to as a “country”. It bristles me every time I hear it said.  It’s reminiscent of Ronald Reagan’s chatter with the press aboard Air Force One in late 1982 on his way back to the US from a Presidential visit to Latin America: “I learned a lot down there…You’d be surprised, because, you know, they’re all individual countries.”

As a relatively freshly minted PhD in international business economics at the time, I thought a statement like that coming from the President of the United States was more than odd.  Just as such an utterance was, of course, grossly naïve, if not insulting, to Latin Americans, so too is the expression of the same sort to Africans.

Critically, from a business perspective, Africa is not a monolith, African countries are not homogeneous, and focusing on “Africa” as a unit of analysis is, simply put, not terribly meaningful.  By painting Africa with a broad brush, perceptions about the real market opportunities and risks are extraordinarily distorted. In many cases–though not all—the perceived risks are either understated or overstated, and the same goes for the perceived returns.

Based on the United Nations’ nomenclature of a ‘sovereign state’, the African continent is currently comprised of 54 countries, 48 of which constitute sub-Saharan Africa.  Needless to say, Africa’s countries all differ from one another—many starkly so—along a variety of dimensions: location, square area, topography, coastal vs. landlocked, population size, resource endowment, ethnic composition, diversity of religious practices, languages spoken, colonial heritage, political make-up, and so on.  And, of course, each country’s economy has a unique character, making it wholly a misnomer to refer to the “African economy.”

I think it is fair to say that the commonly held view is that the vast majority, if not all, African markets are seen as utterly fraught with excessive risk, while exhibiting comparatively few substantial opportunities. To be sure, there are appreciable risks of doing business in many African countries, and I am not playing them down at all.  But so is it the case in most emerging markets around the globe, whether in Latin America; in the Middle East; in the former Soviet Union, Central and Eastern Europe, and the Balkans; in South Asia, including India, and in East Asia, including–make that, especially–China.

Indeed, when I hear sweeping references made about one emerging market in the world as being more or less risky, or being a better investment opportunity, than another, I have to chuckle—and frankly not in a good way. Regrettably that is commonplace, even among some of the most astute—and well-known—corporate leaders, investors and bankers, especially in the advanced countries.  Ultimately, to paraphrase former US House Speaker Tip O’Neill’s quip about politics: ‘all investment risks and opportunities are local.’

Sure, global, regional and national factors influence the opportunity-risk tradeoffs of any particular commercial transaction or investment project.  And, assessing such tradeoffs in an emerging market is usually a very tricky enterprise. But reliance on qualitative perceptions, especially at the aggregate level, let alone hearsay, is a very poor substitute for systematic, data-driven, field-level analysis.  So much so that I cannot tell you how many colossal investment mistakes I’ve seen or heard about being made in African countries—whether on the upside or the downside.

So what are some of the most critical economic misperceptions about countries on the Africa continent?  Here are three.

Growth in Africa is an Illusion. From an historical perspective, the economic performance of the bulk of Africa—the 48 countries comprising sub-Saharan Africa—has been far stronger than popularly believed.  Over the past decade and a half—from 2000 through 2015—the average annual growth rate of ‘real’ GDP (that is, GDP adjusted for inflation) was 5.5% for sub-Saharan Africa as a whole. Over the same period, average annual real GDP for all emerging markets taken together (including the globe’s fastest growing countries, such as China and India, among others) grew at only a slightly higher rate: 5.9%.  By comparison, the corresponding average growth rate among the world’s advanced countries was just 1.8%–about one-third as fast as sub-Saharan Africa.

The US & the UN — A Looming Confrontation