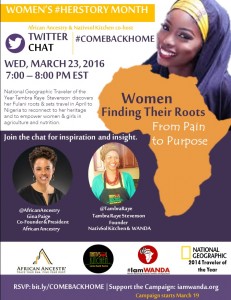 WASHINGTON, DC— For Women’s History Month, NativSol Kitchen Founder and African Ancestry President co-host a Twitter Chat on  March 23, 2016 at 7:00pm EST entitled “Women Finding Their Roots: From Pain to Purpose.” The 60-minute live interactive session will give online users an opportunity to gain insight and inspiration in tracing their African lineage by following the hashtag: #comebackhome.

African Ancestry, Inc., the DC-based company that pioneered genetic DNA- ancestry tracing for people of African descent inspires all to make a connection to their identity through genetic ancestry testing and research.

“This Women’s History Month is a time to reconnect to our origin.  Genetically, black women hold the key to so much of ancestral information.  It is time that she claimed her place as the mother to all living things.  We must birth and nurture the future.” said Gina Paige, President & Co-founder of African Ancestry, Inc. “Women are the glue that holds the family and community together.”

In 2014 National Geographic selected NativSol’s founder Tambra Raye Stevenson as one of the “Traveler of the Year” for finding her African roots through food. Since then she had yet to travel to her ancestral land until this year in late April to Nigeria.

“Between the Ebola epidemic, terrorists’ attacks by Boko Haram and presidential elections, I had kept delaying my travel,” says Tambra Raye Stevenson, founder of NativSol Kitchen. “I was reminded even by Nigerians of safety in the north [of Nigeria]. But I had to trust my instinct and decide that it was now or never to complete my journey of coming back home not for me but for my ancestors.”

While in Nigeria this May, Stevenson will launch a new initiative called WANDA: Women Advancing Nutrition, Dietetics and Agriculture to empower women and girls in sustainable agriculture and nutrition. WANDA serves as an extension of NativSol’s work in promoting the African heritage diet with women and girls as the leaders in the movement.

In the Michael Twitty’s “Cooking Gene,” upcoming book, Stevenson shares her story of discovering her roots and passion for African heritage foods.  “By tracing my roots back to Africa, I became grounded in my identity and inspired to transform the path of my profession by incorporating my heritage,” says Stevenson. “Ultimately I realized I was search of my purpose. With WANDA we change the narrative of our female ancestors held captive to till foreign land to now leading a women’s movement in agriculture bridging the Diaspora and Africa.” Stevenson has kick started a crowdfunding campaign to support WANDA initiative in Nigeria and people can support at iamwanda.org.

Featured in the Washington Post, NativSol Kitchen provides culturally-centered and faith-based nutrition education programming to both youth and adults. Based in Washington, DC, NATIVSOL is on a mission to reclaim the health and spirit of the African diaspora by creating a movement to restore heritage foods into people’s daily lives. Led by trained culinary nutrition experts, NATIVSOL has the passion and talent to equip the community to cook, shop and eat their way back to health.

Founded in 2003 on years of research, African Ancestry, Inc. is the ancestry tracing company that pioneered African lineage matching in the United States utilizing its proprietary DNA-database of more than 25,000 African DNA lineages to more accurately assess present-day country of origin for people of African descent. Since its inception, African Ancestry’s lineage reveals have impacted the lives of more than 100,000 people in the U.S. from communities at large to global leaders such as Oprah Winfrey, Tom Joyner and the Reverend Jesse Jackson. African Ancestry has been featured across the globe in outlets such as CNN’s Black in America series, 60 Minutes and Essence Magazine; and was the centerpiece to the ground-breaking PBS special “African American Lives 1 & 2” with Skip Gates. African Ancestry is African-American-owned and operated and headquartered in Washington, DC.

Headquartered in Washington, DC, WANDA: Women Advancing Nutrition, Dietetics and Agriculture is leading a pan-African women’s movement from farm to fork. Founded in 2016, WANDA is on a mission to develop the next generation of women and girls as leaders in agriculture, nutrition and dietetics through education, advocacy and innovation as a means to alleviate poverty, build healthy communities and improve self-sufficiency.

Is Zuma turning South Africa into a 'mafia state'? 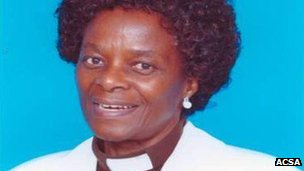