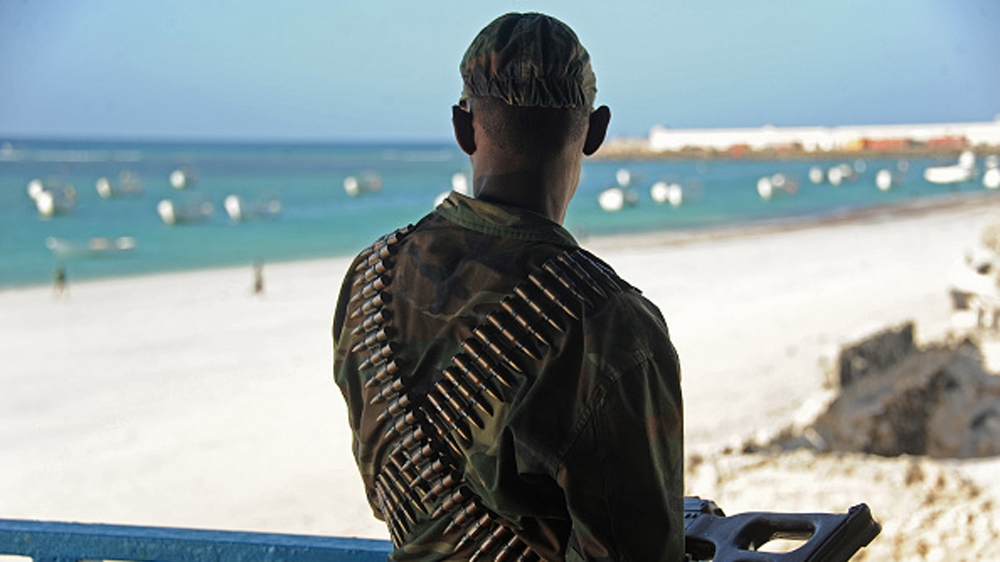 Mogadishu, Somalia – Two men – one in military uniform, the other in a baggy button-down shirt – sat on a plastic mat in an unfurnished tin-roofed room in the heart of the Somali capital, Mogadishu. They were contemplating how they could voice their plight to those in the country’s corridors of power after many failed attempts to reach out.

Ahmed Mohamed Ibrahim and Hasan Mohamed Yusuf were active soldiers fighting on the front lines against al-Shabab – the al-Qaeda-linked armed group fighting Somalia’s internationally recognised government – until they were both seriously wounded.

Twenty-five-year-old Ibrahim vividly remembers the day his life changed forever. He was part of a group of soldiers responsible for protecting the presidential compound and the country’s seat of power, Villa Somalia,against advancing al-Shabab fighters.

“Al-Shabab wounded me in 2010. I was guarding the presidential palace. Three bullets hit my arm, shattering the bones above my elbow into pieces,” Ibrahim told Al Jazeera as balls of sweat formed on his brow. “That was the last time I used my arm properly.”

Doctors at the local hospital told him he needed to be taken abroad for treatment to save his arm.

“I don’t come from a wealthy family, so there was no way I could afford to go outside of Somalia for treatment. I was my family’s breadwinner,” he said in a soft, clear voice, void of emotion. “The local hospital stitched my wound and put a bandage on it. Now, only the skin is holding my arm together.”

He was only 20 when he was wounded during his second year of army service. He has not been formally discharged from the army since his injury, but since 2012, Ibrahim hasn’t received any wages or compensation from the army – which probably doesn’t know whether or not he is even alive, he said.

‘I have lost everything’

Yusuf sat next to Ibrahim on the mat, staring at his own heavily scarred legs. The 37-year-old father of four said his injuries are not just physical.

“I can’t sleep at night. I can still smell the blood from that day,” he recalls. “I was not able to walk for more than a year, and I have constant pain in my head from the shrapnel wound I sustained that day. But worse than the physical pain is that I have lost everything; my wife left with my kids because I could not provide for them after I was injured.”

Yusuf almost lost both legs when his convoy was hit by a roadside bomb in Mogadishu in 2007. There were more than 20 soldiers in the convoy and more than half died. Yusuf escaped with his life.

“It was not my time to go, but I ask myself: Is this life worth it? Will my life have been better if I died that day?” he said in a dejected voice.

Al-Shabab, active mostly in south and central Somalia, wants to overthrow the government in Mogadishu and impose a strict Islamic law in the horn of the African country of more than 10 million people.

But the group, which used to control large swaths of the country, has suffered many recent setbacks.

Somali troops, backed by thousands of African Union troops and after months of close quarters battle on the streets of Mogadishu, were able to push al-Shabab out of the city in 2011. The rebel group, which still carries out attacks and targeted assassinations in southern Somalia, has also been forced out of most towns and cities in the country.

But the military offensive has come at a heavy prize for the Somali government and the African Union.

Many soldiers have lost their lives fighting the armed group in the aim of restoring normality to a country struggling to stand on its feet after more than two decades of civil war.

A short drive from where the soldiers were sitting in a three-bedroom house in the Wadajir district of the city, a family was still grieving their loss.

Long past retirement age Mohamud Gaafow Afrah, the lieutenant-colonel in the Somali navy, had refused to hang up his boots and believed his country was in need of his service. Two years ago, shortly after turning 85, Afrah was assassinated in front of the family home by two al-Shabab gunmen. The bullet holes are still visible on the walls.

“They emptied their pistols into him. They stopped firing only after they ran out of bullets. Serving his country is all he did,” Khadija Abukar Mohamed, Afrah’s widow, told Al Jazeera. “It was the only thing he knew and the only thing he ever did,” she said, surrounded by her children and grandchildren as tears welled in her eyes.

Mohamed lost her husband three months before they celebrated their 30-year anniversary.

Most of the troops under Afrah were born during the country’s civil war, which started in 1991. Many lost their parents during the war. To many of his soldiers, he was a symbol of hope, a pillar to lean on in times of hardship.

“He was a father figure to the troops serving under him. Many of them asked to be transferred elsewhere, and many left the force after his death,” his widow added.

MORE on Al Jazeera’s coverage of al-Shabab in Somalia

“It worries me every time they step out of our door. Our family has gone through a lot,” she said. “The government does not care about those serving Somalia. They did not even write us a letter or call us when my husband was killed.”

But for his eldest son, Ahmed Mohamud Gaafow, the reason for joining the police force is clear: “Somalia needs its people now. We should not expect others to return our country to what it was. If I don’t join the police and work to bring stability to our country, who will?” he asks.

“Everyone will die. We will die when our time to go comes. I’m happy with what I do, and I know very well how dangerous it is. But it is a risk worth taking,” Gaafow added.

‘Foreigners in their own country’

Al-Shabab is adapting its tactics and using roadside bombs more frequently, but the Somali troops wear no bulletproof vests and travel in unarmoured vehicles, unlike their African Union counterparts. This is not lost to the injured soldiers and the families of the deceased troops.

“They [Somali government and the international community] love the African Union troops more than the Somali soldiers. The foreign soldiers are treated better. They have good healthcare. Their families receive good compensation if they die. No one cares about us,” Ibrahim said, with Yusuf nodding in agreement.

“I want to tell our leaders only Somali soldiers can help this country – not foreigners. It is time they gave us our rights so we can continue doing our job and do it even better than we are doing now,” Yusuf added.

The Somali government denies that it has neglected its soldiers and says things are getting better for those serving the country.

“We are coming from decades of civil war and have only started building our military again. It is a start, and things will get better in terms of both our troops’ welfare and equipment.” Abdalla Hussein Ali, the deputy defence minister, told Al Jazeera.

“Yes, there used to be difficulties in terms of paying the troops, but our government has put a lot of effort into this recently. Currently, the government spends more than 50 percent of its budget on its security services. Paying our troops and making sure they receive their salaries on time is now a top priority for us,” Ali added.

But, to some of the troops, the promise of better times ahead might have come too late.

“I have lost my family. I have seen my friends die. I can barely walk,” Yusuf said.

“Nothing they say or do will change that.”