Senegal’s FGM campaigner: ‘My child will never be cut’ 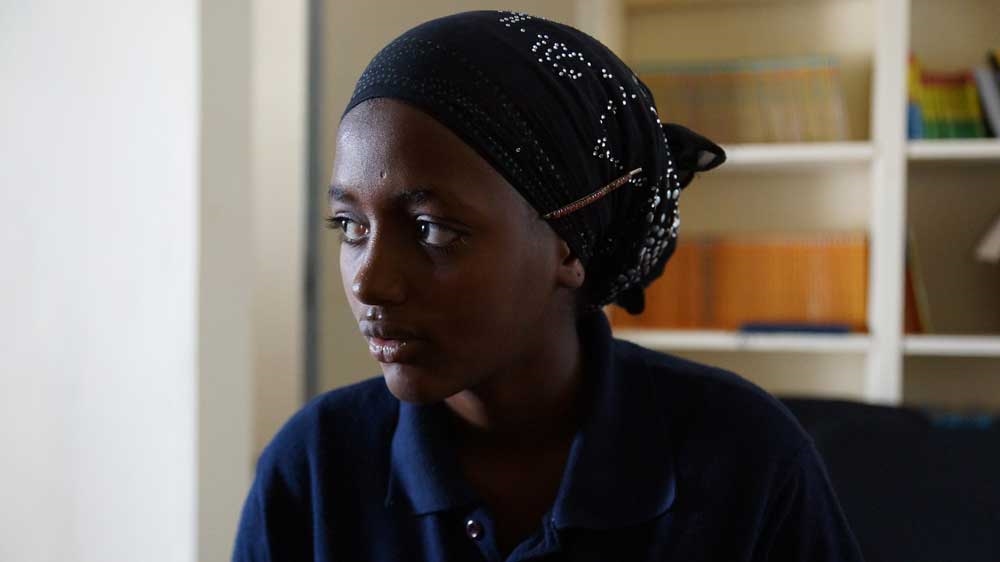 Kolda, Senegal – For many in Senegal, especially women, the centuries-old custom of female genital mutilation (FGM) is linked to religion. This is one misconception that one awareness campaign here is trying to dispel by using imams and community leaders as communicators.

The campaigners go to different villages in southern Senegal to talk to adults and children directly. They conduct interactive workshops in a bid to raise awareness and allow participants to share their stories through art.

In one class, students are huddled around a black clay pot turned upside down. On it, they draw their stories of FGM and child marriages.

“It’s a way for them to process what they or people close to them have gone through. It serves as therapy and we try to help explain their rights to them,” says Mariama Djarama Jo, a community social worker and activist. She comes from a family of circumcisers, and is also a victim of FGM.

Mariama chose not to subject her daughters to FGM and has been actively persuading people in her family to follow suit – which they have.

More than 200 million girls and women around the world are affected by the practice.

According to the World Health Organization, the highest concentration of cases are in 30 countries in Africa, the Middle East and Asia

The West African country of Senegal is one of them – despite a ban that was enforced in 1999.

Mariama has been working with different local and international groups to spread awareness, especially about the health risks associated with the banned practice.

In the south of Senegal, up to 85 percent of women and girls have undergone FGM, or cutting, as it is also called.

Certain tribes are still holding on to the practice as they see it as a tradition they must continue to “purify” their girls.

“The women who do the circumcision don’t know about the health problems many girls go through because of this. And they need to know,” Mariama says.

“If a girl got ‘hemorrhage’ [bleeding] the women would say it was some mystical disease. That means that those women don’t know the danger of inflammation of the body after circumcision.”

Mariama also points out the dangers of the knives being used to perform the custom: “It can happen that during 15 to 40 years of practice they use the same knife without sterilising it.”

The campaigner said the ban was a welcome step but she wished that the awareness campaigns about the risks had started before it came into force.

“It’s deeply rooted in the culture. It existed even before Islam came here. Even the law, or prison, cannot stop the practice because people will say it’s their culture and tradition.”

Often when women who perform FGM are reported to the police and are jailed for a few months – but this doesn’t change anything according to Mariama.

“Once they come out they will continue, because that’s how they earn their money. This practice of circumcision is ravaging our children, especially in our region. We have the most elevated numbers of mothers dying giving birth here in Kolda.

Still, she says she remains hopeful that the campaign will succeed – even if it will take over 20 years.

“We have started to educate the young generation and when the older generation goes away, the practice will stop,” Mariama says.

‘This custom stopped with me’

The initiative to fight FGM is run by World Vision in collaboration with Sister Fa, a Senegalese female rapper based in Berlin.

For the last three years, Sister Fa has been conducting workshops with children, parents, local rappers and the wider community to raise awareness about children’s rights – especially for girls – and the dangers of cutting.

Sister Fa is a victim of FGM herself and feels very strongly about it.

“Growing up I had so much pain and anger inside me towards my mother as I did not understand why she did it to me,” she says. “I thought that she didn’t love me. Now I understand that she thought she was doing the right thing as she too went through it.”

The rapper is the mother of a 10-year-old girl, and she cannot imagine anything similar happening to her child.

“This custom stopped with me. I will carry on educating mothers and children about their right to their bodies and how this practice is harmful to them,” she says.

Abdirahman and Mariam, two 10-year-olds from a school in Madina Sharif village in Kolda, have been part of the project for the last two years.

Abdirahman, an eloquent, outgoing five-grader says the campaign has played a huge role in his education.

If he gets a daughter when he grows up, he says he will not allow her to go through FGM.

“If my wife insists on doing it to my child I will leave her,” he says firmly.

Mariam had FGM done to her when she was a little girl. She also lost her baby sister, aged only one, following complications after she was cut.

Almost every child that we encountered in Kolda knew someone that died after being cut.

Abdirahman points out that even one of the awareness campaign NGO workers lost his baby girl to FGM.

“He is against FGM, but his wife did it behind his back and the baby bled to death,” he says.

This too was a common tale told to us by locals. The women are the victims of FGM, but often they are also the main culprits that carry on the tradition due to social pressures and lack of knowledge and education.

Mariam wants to be a police woman when she grows up. She believes education is key to changing things.

“As a police woman I will be able to fight against FGM and fight for girls’ education. One day I will have my own baby, and because I know how it feels to have it done and I have lost my baby sister to it, I will not do this to my own child. It will end here.”