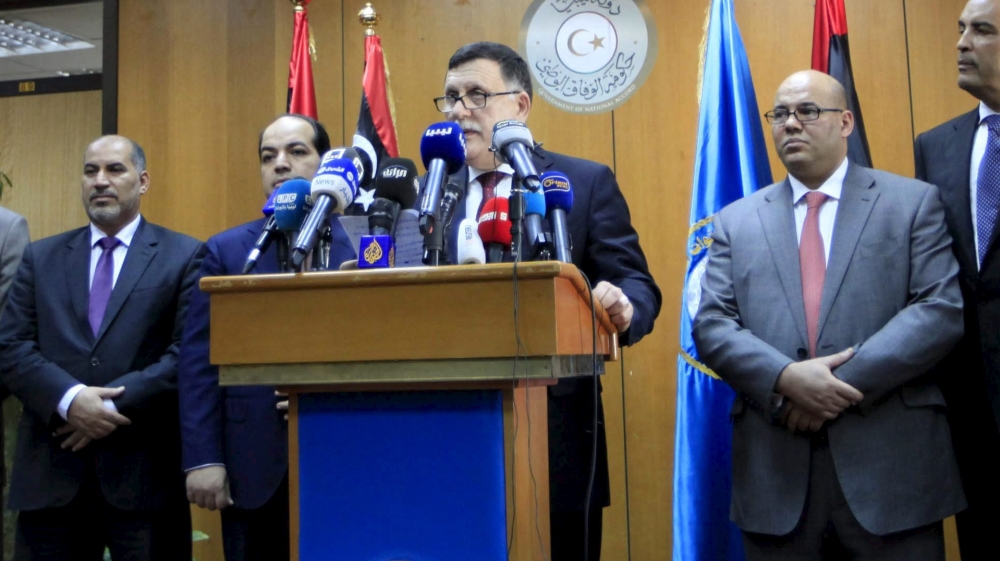 Libya’s UN-backed Government of National Accord arrived in Tripoli by sea on Wednesday, defying opposition attempts to keep it out of the Libyan capital and set up a base there.

The United Nations and the the European Union welcomed the arrival of Prime Minister Fayez al-Sarraj, who sailed in from neighbouring Tunisia along with six deputies from the Presidential Council.

Libya has had two rival administrations – one based in Tripoli, the other in the eastern city of Tobruk – since mid-2014.

Speaking to reporters after his arrival, Sarraj called for unity and pledged to implement measures to alleviate the suffering of civilians.

Yet, the arrival of the UN-backed government was immediately blasted by the administration in Tripoli, which called Sarraj to either leave the Libyan capital or hand himself in.

Al Jazeera spoke to George Joffe, lecturer of Middle East and North African International Relations at the University of Cambridge, about the latest developments in Libya, and whether they could help end the chaos in the country.

Al Jazeera: What kind of impact can the arrival of the UN-backed government have if neither side is willing to agree that the other one is in charge?

George Joffe: The fact is that there are three governments now in Libya: one in Tobruk, another in Tripoli, and now a second one in Tripoli as well.

They are there because the former two are illegitimate – the United Nations has carried through negotiations to provide a third legitimate government, now recognised by the international community, and they want to see that government come into office.

Al Jazeera: So neither of the other two governments are willing to accept the one that arrived by boat in Tripoli?

Joffe: It’s a little more complicated than that, because the majority of the assembly in Tobruk is prepared to accept the new government.

A significant number of those in Tripoli are prepared to accept it too.

There are, however, certain powerful figures who are opposed to it and they are now trying to block its entering.

Al Jazeera: What are the most likely scenarios from this?

The most likely scenario is that in the very near future the new government will call upon European states and the United States to help it control the growth of ISIS [Islamic State of Iraq and the Levant] inside Libya.

Also, the Italians in particular want it to come in to control the movement of migrants – the migrant season is now just beginning.

Al Jazeera: What are the chances of these two aims being successful if the government doesn’t have much support?

Joffe: On the contrary, I think it’s got more support than people realise.

There’s a large number of moderate figures inside Tripoli who now accept the need for a third government and have stated they would support it.

There are some who are opposed to it [but] they are going to be marginalised; they will probably now find themselves sanctioned by the United Nations Security Council, and the same will be true in Tobruk. So I think we may see much greater support than we think.

And beyond these two, the new government has got the support of the most powerful militia inside Libya based in Misrata.

Al Jazeera: Does it have the support of the army? In fact, is there a working army?

Joffe: That is a major problem. The army, which is really based in the east of Libya at the moment around Benghazi, is opposed to the new government because it requires the head of the army, General Haftar, to step down.

Now, unless he can be accommodated, there will be a problem there.

But nonetheless, for the main purpose, that of bringing in additional outside help to train a new Libyan army, that purpose will be achieved.

Al Jazeera: So your sense is that this is one step closer to bringing in an element of stability to Libya?

Joffe: It’s one step towards trying to find a solution to that end.

The post Q&A: What next for Libya? appeared first on African Media Agency.