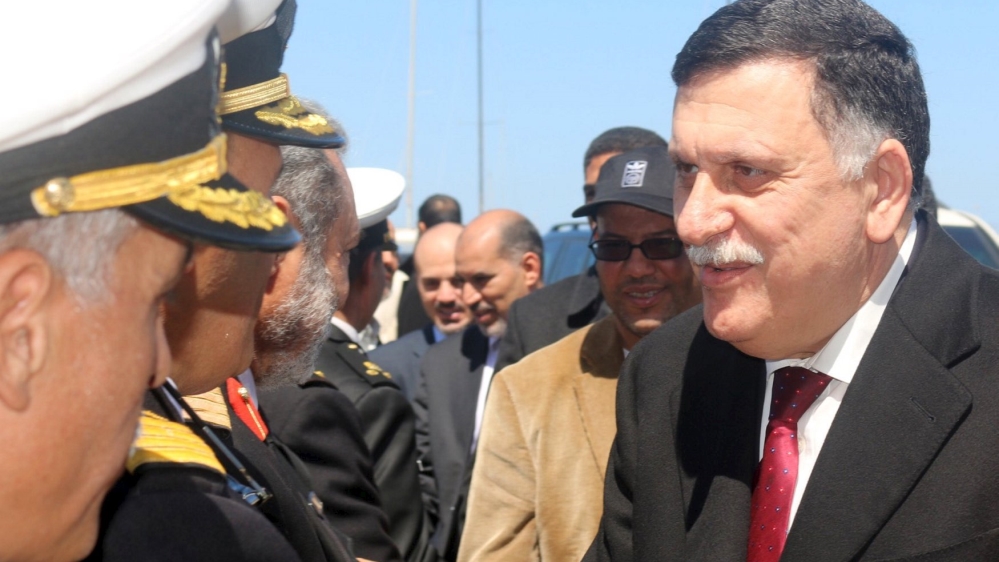 Members of Libya’s UN-backed Government of National Accord arrived in the capital Tripoli on Wednesday, defying warnings by rival factions that it should not move there.

The Presidential Council was formed under a UN-mediated peace deal late last year in an effort to end the political chaos and conflict that has beset the country since the uprising that toppled Muammar Gaddafi five years ago.

It is supposed to replace the two rival administrations – one based in Tripoli, the other in the eastern city of Tobruk – that have been battling each other for more than a year.

Tripoli’s self-declared government and armed groups that back it had in recent days warned the unity government not to travel to Tripoli.

But seven members of the council, including its head and Prime Minister-designate Fayez al-Sarraj, arrived in the Libyan capital by sea and set up a temporary seat of power at a naval base. The officials were prevented from flying into Tripoli by the rival government.

“At this blessed historic moment, we announce to our people the start of National Accord Government work from Tripoli and the beginning of a new era of dialogue and communication with the sons of our people regardless of their political attitudes,” Sarraj told a news conference after his arrival.

“This will be based on the Libyan political agreement and the guarantees it includes to all parties and to achieve the goals of the February 17 revolution.”

Yet, in his first remarks after Sarraj’s arrival, the head of the acting government reiterated his opposition to to the Government of National Accord and urged its members to either surrender or leave.

“The government of national salvation calls on those illegitimate infiltrators to either hand themselves over and be in safe hands, or to go back to where they came from,” Khalifa al-Ghawi, the leader of the General National Congress, told reporters.

“The salvation government is working with judicial and legislative entities, all state institutions and NGOS, as well as community leaders to take the necessary steps to save the country from the threat of chaos and foreign intervention.”

Al Jazeera’s Mahmoud Abdelwahed, reporting from Tripoli, said the situation was “calm” in the capital following the news of the unity government’s arrival. He added the big question now was whether the members of the council would be able to govern.

“There are a lot of challenges facing this government here in Tripoli,” Abdelwahed said. “Three major political entities in Libya are opposing the presence of this government.”

Martin Kobler, the UN envoy for Libya, welcomed the arrival of the council in Tripoli and urged all public bodies to facilitate a peaceful and orderly handover of power.

“I call on the Libyan people to extend to the Presidency Council and the Government of National Accord their full support and cooperation,” Kobler said.

“The international community stands firmly behind them and is ready to provide the required support and assistance,” he added.

Ahead of its arrival, the council said it had negotiated a security plan with police and military forces in Tripoli, and with some armed groups.

It has called for an immediate transfer of power, though both the Tripoli and eastern-based governments oppose this.