ACCRA, Ghana, 18 March 2016, -/African Media Agency (AMA)/- The African Transformation Forum (ATF), held from 14-15th March in Kigali, Rwanda, concluded with the official launch of The Coalition for Transformation in Africa – a network of experts working across sectors and borders to drive policy and institutional reforms.

The ATF was organised by the African Center for Economic Transformation (ACET) and the Government of Rwanda.

Explaining the concept behind the Coalition for Transformation in Africa, K.Y. Amoako, president of ACET said it would comprise like-minded public and private sector individuals organised in chapters, each focussed on specific issues raised during the Forum. Chapters would continue to meet and work beyond the Forum and would report back at subsequent forums.

Earlier, the ATF welcomed HE Paul Kagame, President of the Republic of Rwanda, who gave a detailed speech about how his small nation has led the way in forging a developmental state based around a strong economy and widespread participation from citizens.

The Forum also held interactive discussions on the continent’s vital sectors and ambitions – among them agriculture, trade and financial inclusion.

Dede Amanor Wilks, a development specialist currently consulting with the UN’s Economic Commission for Africa (ECA), was applauded for a strong speech arguing that women hold the key to a green revolution in Africa.

Wilks argued that “economic transformation begins with agricultural transformation” for Africa’s women. Far more must be done by governments to better the lot of their female citizens if they want to encourage the broad- based transformation of rural communities, she urged.

“The greatest obstacle to the role women can play in transforming African agriculture lies in political will,” she said.

One solution put forward by the panel was the creation of female agricultural co-operatives. These would allow women to solve problems, encourage change and realize their economic independence in the largely male-dominated societies in Africa.

“Women’s cooperative movements can change the balance between men and women in agriculture. Cooperative societies can provide an institutional framework for women to solve many of their problems.”

Alemayehu Konde Koira, program manager for ‘Economic Opportunities for Youth’ at The MasterCard Foundation, said that young people also held the key to an agricultural transformation. He said that treating this sector as a business could help to encourage youngsters who were previously off by a sector seen as ‘dead-end’

Enabling greater business participation was very much on the agenda during a passionate discussion on broadening citizens’ access to financial services. Panellists argued that Africa’s financial system must reach out to rural citizens if the continent’s economic transformation is to be truly inclusive.

The speakers – among them Thomas Kigabo from the Central Bank of Rwanda, Amolo Ng’weno from the Bankable Frontiers Associates, and Henry Kerali, Country Director for Ghana, Liberia and Sierra Leone at the World Bank – debated how financial firms can reach small and medium enterprises in rural areas.

Many are deprived of the capital they need to expand and serve local communities, while others struggle to form effective pitches to banks. Given that around 90% of African jobs are created by SMEs in the formal and informal sectors, panellists agreed that the time for action is now.

The panellists concluded that commercial banks too often see SMEs as high-risk – rather than a viable business opportunity. Governments need to formulate policies to encourage the growth of SMEs and facilitate their ability to raise capital – including the scrapping of onerous rules and regulations. Training and basic education – provided by credit information bureaus – could help SMEs to craft winning pitches for finance.

Away from the formal financial sector, crowd sourcing schemes should be piloted to raise money for SMEs that wish to expand by drawing on Africa’s keen diaspora.

Building SMEs into commercial giants which can serve the wider African continent was highlighted by delegates as a huge priority.

Speaking on a panel covering trade and regional integration, Richard Sezibera, Secretary General of the East African Community, argued that “trade facilitation should be anchored into economic transformation.”

Africa’s domestic markets are simply too tiny to enable the local industry to achieve economies of scale. The continent has by far the lowest level of inter-regional trade, of any other region, at less than 13%, while the cost of trade among African countries is higher than the cost of trade with nations outside the region.

According to Sezibera, a lot of work has gone into implementing policies for intra-ECA trade. In Rwanda’s case it has grown from 10% to 26% in less than a decade – which is fast but not fast enough.

Despite an intense focus on tariffs in existing debates, Richard Newfarmer, country representative at the International Growth Centre, argued that the real issue is the “nitty gritty barriers to intra-regional trade”

Trade facilitation is five times more important to expanding exports than negotiating tariffs, he argued. Yet the costs of trade are still far too high. East Africa is a rare exception. The progress has been dramatic over the last 10 years: trade costs have fallen, the waiting time in the port of Mombasa has gone from 13.5 days to 5.8 days and transit times from Kenya have been halved from four to two days. But trade costs remain stubbornly high.

One organisation working to reduce these costs is the non-tariff Barrier Monitoring Council, commended by the panelists for removing trade barriers and encouraging regional integration in the East African Community.

Ultimately, Newfarmer concluded, Africa needs to find simple solutions towards its trade vision, by working through the World Trade Organisation to give Africa a stronger international voice and leverage more support from fellow WTO members.

About IC Publications
IC Publications is one of the world’s leading sources of analysis and debate on African political and economic issues. Through a variety of platforms and services including: magazines, digital media and international events, IC Publications delivers unparalleled coverage and cutting-edge content on the latest developments in Africa. Leading publications include African Business,African Banker, New African and New African Woman. 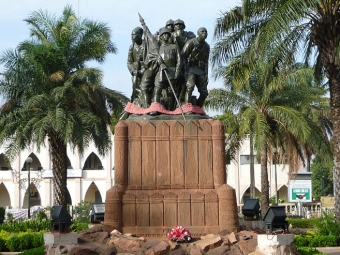