Loud whistling interrupted the Kenyan president as he tried to make his annual state of the nation address to parliament, which was broadcast live.

They had earlier vowed to disrupt proceedings to protest at the government’s failure to address “deep-rooted corruption” in Kenya.

Seven MPs were removed and the address was delayed by half an hour.

The speaker of the house, Justin Muturi, described the commotion as a “gross disorder” and ordered that the troublemakers be forcefully ejected as they were ignoring his commands to stop whistling.

The speaker of the house, Justin Muturi, described the commotion as a “gross disorder” and ordered that the troublemakers be forcefully ejected as they were ignoring his commands to stop whistling.

The BBC’s Wanyama wa Chebusiri in the capital, Nairobi, says the annual address to parliament is an important state occasion and is a chance to set out the government’s plans for the next year.

The whistling affair is a big embarrassment for the president as diplomats also attend the event, our correspondent says.

On a recent visit to Israel, President Kenyatta himself acknowledged the problem, saying Kenyans were “experienced in stealing”.

When he was able to start his speech, the president spoke of his government’s commitment to fight graft, saying he had taken an “unprecedented step”.

“The decision to fire a third of my cabinet due to corruption was a very painful but necessary step,” he said.

He added that he expected economic growth to hit the 6% mark this year and security would be beefed up given the threats Kenya faced from the Somalia-based al-Shabab group, which has launched several deadly attacks on the East Africa nation.

Kenyans are very active on Twitter and the hashtag #SON2016 is trending, debating rights and wrongs of the incident.

Kenya was ranked joint 139th out of 168 countries last year on Transparency International’s global corruption perceptions index – where first place is perceived to be the least corrupt nation.

A recent survey by Kenya’s anti-corruption commission suggested that nearly 75% of the population thought there was a very high level of corruption in the country. 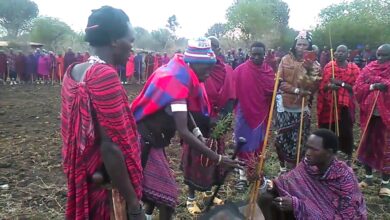