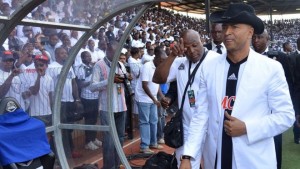 There is speculation that the owner of one of Africa’s top football clubs Moise Katumbi could run for president in the Democratic Republic of Congo in polls due in November. The BBC’s Maud Jullien went to meet him in his base of Lubumbashi.

“I know the hope people have in me – I know what is their expectation.

“The problem is we need to sit around a table as big guys to have at least one [opposition] candidate,” Moise Katumbi says, as we drive around Lubumbashi, DR Congo’s second city.

Mr Katumbi is calling on the country’s opposition to unite behind a single candidate, though he hasn’t said yet whether that means him.

He has asked me to join him on a tour of the capital of Katanga, DR Congo’s wealthiest region, with its vast reserves of copper and cobalt.

It is also the area which he governed for almost a decade.

In September last year he broke ties with the ruling party when he accused President Joseph Kabila, his former ally, of wanting to cling to power.

When we get out of the car at a market in the city, I can barely count to 10 before hundreds of people crowd around us singing “Chapwe”, Mr Katumbi’s third name, used by many to refer to him.

People are generally quick to crowd around political figures, especially given their wealth and influence, but his popularity in Lubumbashi does seem genuine.

Two men thrust photos of deceased family members at us.

They want Mr Katumbi to pay for their funerals.

“We’ve come out to honour you, will you give us something now?” asks one teenager.

Mr Katumbi is said to hand out dollar bills to during public visits, but not on this occasion.

Still, many faces light up from afar and hands wave as we walk by.

His popularity is partly down to his job as the president of a great source of Congolese pride – football club TP Mazembe.

They are Africa’s reigning football champions, having won the African Champions League for the fifth time in November.

Hundreds of Mazembe supporters, known as the “100 pour cent” (100%) were out on the streets, their faces painted in the club’s black and white colours.

Many had decorated their bodies with amulets and fur.

Several had even written “Moise” on their chests. 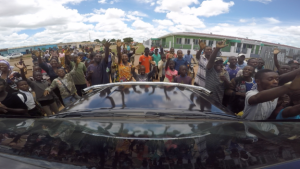 “You can tour Congo,” one of them said, “but anywhere you’ll go, the candidate of the people is no-one else but Moise Katumbi.”

Mr Katumbi dodges the question when I ask him whether he will run for president.

Instead, he says his current priority is to unite the opposition and ensure the presidential elections actually take place by November.

There are fears that President Kabila will find a way to delay the polls, violating the constitution in his bid to extend his time in power beyond his second five-year term.

Mr Katumbi says the opposition is making progress, with the number of possible candidates now down from 24 to three.

He is proud of his achievements.

Investment and tax revenue also increased during his time in office.

But his governing style in Katanga, home to much of DR Congo’s mineral wealth, has not been without controversy.

Mr Katumbi has been accused of abusing his position of power to benefit his football club, something he denies.

The payments are filed under “voluntary social payments”, which means that the company can deduct them from its income taxes.

TFM didn’t respond to a BBC email requesting details on these donations.

A spokesman for TP Mazembe did not give us a definitive answer about where the money went but said the funds were probably used to build a football academy.

“He didn’t run the province like a statesman, but rather like the head of a household,” says Donat Mpiana Ben Bellah, of the human rights group ACIDH, alleging that patronage was rife during his governorship.

“I was born in a family where there was business, I entered into politics when I was already a businessman, but I stopped this work.”

The allegations do not seem to have tarnished Mr Katumbi’s popularity.

“What Moise did in Katanga, many before him were not able to do,” says Jean Claude Katende, of the civil society group Front Citoyen.

“He built roads, schools, provided running water, and fought for Katanga to get its share of the wealth it provided to the central government.” 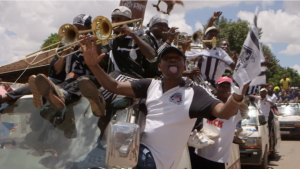 “People believe that he can extend the good he did in the province to the national level. His courage, when he left President Kabila also added to his popularity.”

After Mazembe’s victory at the African Super Cup when they defeated Tunisia’s Etoile, hundreds of supporters paraded in Lubumbashi on motorcycles and on top of cars.

Many of them were shouting: “Moise, President” in the city’s central square.

At the moment, Mr Katumbi is seen as the only opposition politician in the country who has a tangible support base and could win an election.

But the road to a presidential poll is still a long one and there are still many questions left unanswered about whether it will even take place this year, whether the current leader will run again, and who in the opposition will even be allowed to campaign.

Angola's Jose Eduardo dos Santos 'to step down in 2018'