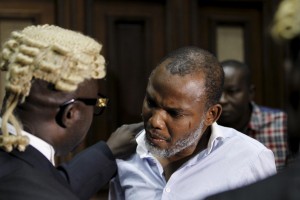 Indigenous People of Biafra leader Nnamdi Kanu is seen with his counsel in Abuja, Nigeria on January 20, 2016. His arrest has triggered protests across Nigeria by pro-Biafran activists.
AFOLABI SOTUNDE/REUTERS

Dressed all in white, Nnamdi Kanu took his seat in the Federal High Court in Abuja, Nigeria, on February 9. Though he had been in detention for almost four months, the 48-year-old activist initially declined requests from court officers to agree to have his handcuffs removed. In an act of defiance, he raised his cuffed hands to the television cameras. It was hard to divine his intention, but the act and his angry expression suggested that he barely recognized the authority of the court he found himself in.

Kanu, a dual British-Nigerian citizen, was arrested in Lagos in October by Nigerian intelligence agents during a visit from his home in London. Kanu leads the Indigenous People of Biafra (IPOB), a separatist movement calling for the independence of the southeastern territories that made up Biafra in the late 1960s. He denies all six of the charges against him, which include treasonable felony, a charge that carries a possible life sentence. The authorities essentially accuse Kanu of trying to overthrow the Nigerian head of state by broadcasting secessionist propaganda on Radio Biafra, the underground radio station he runs from London.

An oil-rich region about the size of the island of Ireland, the former Republic of Biafra has a history of turmoil and civil unrest. It existed as an independent republic for just two and a half years in the late 1960s, after millions of people—mainly from the southern Igbo ethnic group—led a movement to secede from the newly independent Nigeria, sparking the civil war of 1967 to 1970, which claimed more than 1 million lives.

Forty-six years after that war ended, Nigeria is again facing a potential uprising in the southeast. Since Kanu’s arrest in October, a protest movement has sprung up in Nigeria, with thousands of people identifying as Biafrans demonstrating in the streets across the southeast and as far north as Abuja to demand the release of their leader. The demonstrations began peacefully but turned bloody in December: According to Associated Press reports, at least 22 protesters and two police officers have been killed in clashes at pro-Biafra rallies. The Nigerian government has not provided an official death toll, but Uchenna Asiegbu, a senior IPOB official, tells Newsweek that more than 100 civilians have died.The rise in tensions between pro-Biafra activists and the Nigerian government comes at a time when Nigeria—Africa’s biggest economy and most populous nation—is grappling with serious challenges. In recent years, the country has struggled to quell an insurgency mounted by Boko Haram, a militant group that has killed an estimated 20,000 people since 2009 as it attempts to establish an Islamic state in northeast Nigeria.

Although President Muhammadu Buhari said in December that Boko Haram had been “technically” defeated, the group continues to attack civilians and security forces in Nigeria’s northeast.Meanwhile, militant groups in the oil-rich Niger Delta have been linked to a series of recent attacks on oil and gas facilities in the area, which was wracked by conflict in the mid-2000s. A Nigerian Cabinet minister said in January that the attacks were costing the country $2.4 million a day. This instability in both the northeast and the south, combined with plummeting oil prices, has hammered Nigeria’s economy. (Oil revenue constitutes 35 percent of Nigeria’s gross domestic product, and 90 percent of the country’s export revenue comes from oil.) In December, Buhari said he expected the country’s budget deficit to double in 2016 and capital expenditures to triple, as the government tries to revive growth.Now, as pro-Biafra groups step up their demands for a breakaway state, the Nigerian government has yet another challenge on its hands. Today’s pro-Biafra secessionist movement, led mainly by young people with no direct memory of the civil war, nevertheless shares some of the same concerns that sparked the original calls for independence. Nigeria was forged in 1914, when British colonialists cobbled together two territories, hoping to subsidize the poorer north with the resources of the oil-rich south. The borders of modern-day Nigeria did not reflect the ethnic boundaries of different rival kingdoms: the Igbos in the southeast, the Hausa-Fulani in the north and the Yoruba in the southwest.

After Nigeria declared itself independent of British colonial rule in 1960, regional and ethnic tensions erupted in a vicious power struggle. A coup against the northern-led government in January 1966—seen by the leaders and many people from the north of the country as a plot led by the Igbos—prompted the northerners to seize back power. Mobs from communities in the north of the country then killed tens of thousands of Igbos; many Igbos living in various parts of Nigeria fled to their eastern homeland. The following year, military officer Odumegwu Ojukwu annexed the southeast and declared the independent Republic of Biafra. That marked the start of Nigeria’s bloody civil war, which ended in 1970 after Nigeria blockaded Biafra’s border and hundreds of thousands of people starved to death. The Biafran troops surrendered.Nearly half a century later, many of the same rivalries and fears of persecution that set off the war still linger. After Nigeria returned to democratic rule in 1999 after decades of rule by military juntas—excluding one four-year stretch that began in 1979—the Movement for the Actualization of the Sovereign State of Biafra was founded with the aim of restoring the state of Biafra. But the IPOB, established 10 years later, has since become the premier pro-Biafra movement; it claims to have some 20 million members and 95 branches across the world. It has even opened its first Biafran embassy in northern Spain’s Basque country, chosen because of the region’s historic struggle for independence.Kanu, who was elected IPOB leader in September 2015, has been hailed as the restorer of the Biafran nation. “Nnamdi Kanu is ordained to take us to the Biafran promised land,” says Asiegbu. “He is the chosen one.” Kanu’s critics say that the secessionist leader is a promoter of hate speech and propaganda.

At an event in May 2014 to commemorate the 1967 declaration of the Republic of Biafra, Kanu reportedly told a group of IPOB members and civil war veterans: “We shall fight until we get Biafra. If they don’t give us Biafra, no human being will remain alive in Nigeria by that time.”Nigeria’s president has said relatively little on the subject of Kanu’s arrest or the Biafran issue. I n December, Buhari told journalists that Kanu had entered the country without a passport—a claim Kanu disputes. “There’s a treasonable felony against him, and I hope the court will listen to the case,” Buhari said. Since then, the president has kept silent, and the government has declined repeated requests from Newsweek for further comment.With pro-Biafra protesters rallying around Kanu’s arrest, the outcome of the trial could heighten tensions between the activists and the government. “The significance of Kanu’s trial can only be determined by what follows after,” says Manji Cheto, an Africa analyst at U.K.-based risk consultancy Teneo Intelligence. “Should IPOB react violently, it could potentially be a tipping point for the Biafra agitation.”