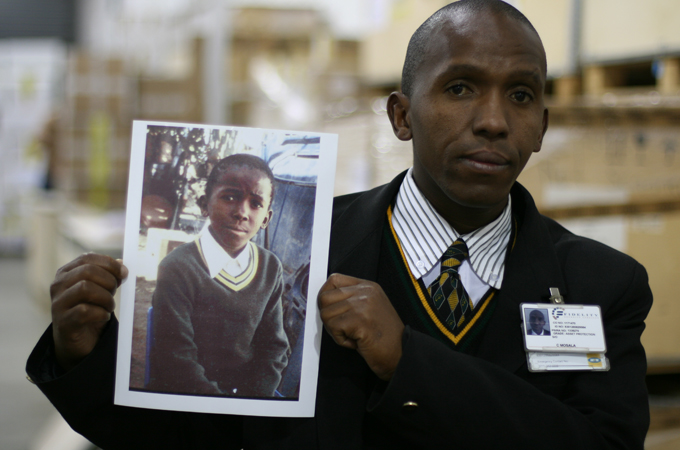 The South Africa ‘Up’ series follows the personal journeys of a diverse range of young South Africans who were born into the apartheid era, filming them every seven years as they grow up through the country’s dramatic political changes.

In 28Up we revisit the characters in 2013, at age 28. The final film in the series reveals some of the tragedies that many of these young people have had to live with, including violence and death, that has touched most of their lives.

Although many of the original 20 seven-year-olds have, as adults, made good lives for themselves and their families, the series ends with sadness and a grim sense of the challenges still facing the country and its people in the post-Nelson Mandela years.

Tsepho, whose name means ‘hope’ has a vibrant, optimistic spirit but has wrestled with his own demons. He works as a security guard, a job he takes very seriously. But he barely earns enough to buy a new pair of shoes.

He has a loving relationship and a baby, but has had to overcome a dark period in his life when he nearly lost everything due to his abusive behaviour.

Luyanda shows us around his township shack with pride. The one-time playboy who loves life – even in the hugely dangerous area where he lives – tells us how he finally found the love of his life and settled down.

But his story ends in tragedy and he speaks movingly of this heart-breaking loss.

Andiswa, Luyanda’s best friend throughout the series who always appeared at his side, has become yet another victim of the HIV/AIDS crisis in South Africa.

Luyanda tells us how she became ill and had to return with her daughter to live with her grandmother in their rural home. She passed away at the age of 25.

Patrick is the lawyer he always thought his father wanted him to be. He has moved back home to do his master’s degree and feels a bit strange living at home at 28.

The cockiness he had when he was a young and privileged seven-year-old has given way to a compassionate young man, concerned for his country and those who did not have his easier start in life. His experience as a white South African carries its own complexity as he deals with violent crime from the other side of Table mountain in Cape Town.

Claudia is now a junior doctor at a huge Johannesburg hospital, her education having given her opportunities for great social and economic mobility. But she struggles with relationships and is concerned for the damaged society she sees around her in the wards every day.

She reflects poignantly on what that means for her and the idea of bringing children into the world. She closes the series with a deeply affecting reflection on the journey that South Africa has been on and the very long way still to go.