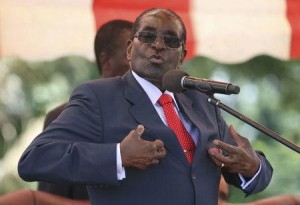 Mugabe turns 92 on Sunday and, judging by those comments, has no intention of stepping down – despite being Africa’s oldest leader and the only president Zimbabwe has known since independence in 1980.

His life presidency aspirations could frustrate the feuding big-hitters of his ruling ZANU-PF party who have been trying for years to position themselves for a post-Mugabe political era.

They will also fuel criticism from opponents of the government, who say the internal conflict is distracting it from its job of dealing with a stagnating economy and responding to the worst drought in a generation – charges denied by ministers.

“Amid this looming starvation, coupled with an economy on the ropes, no one is paying attention to this national crisis. There is no government response as ZANU-PF is too pre-occupied with the succession issue of President Mugabe,” main opposition leader Morgan Tsvangirai said on Tuesday.

Critics blame Mugabe for many of the problems facing the country. They say his policies, including the seizures and redistribution of white-owned commercial farms, drove one of Africa’s most promising economies into nearly a decade of deep recession until 2008 that cut its output almost in half.

They also say Zimbabwe’s sluggish economy and low productivity – the jobless rate is around 85 percent – has left it ill-equipped to deal with the drought, which has left 3 million people in need of food aid, about a quarter of the population.

For his part, Mugabe defends his land seizures as necessary to correct colonial injustices and says the economy has fallen victim to sanctions by Western countries that are punishing him for seizing white-owned land.

Mugabe remains in charge of day-to-day running of his government. He still presides over graduations at all state universities and military passing-out parades, and takes trips abroad.

The president maintains that his party will choose a successor. But he plans to contest the next election in 2018 aged 94, seeking his last five-year term under a new constitution that would see him through to 99.

His wife Grace, a powerful figure in ZANU-PF in her own right, told party supporters last week that he was the only one who could keep Zimbabwe “intact and peaceful”, adding she would push him in a wheelbarrow to work if he was unable to walk.

“From analyzing the political situation, his political speeches, his political actions, it is increasingly becoming clear that he is gunning to be there for as long as he lives,” said Eldred Masunungure, a political science lecturer at the University of Zimbabwe. 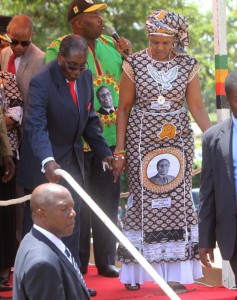 Zimbabwean President Robert Mugabe, left, is assisted by his wife Grace to get off the stage after addressing supporters at the party headquarters in Harare, Wednesday Feb, 10, 2016. Mugabe addressed thousand of party supporters and chaired a bitterly divided Zanu pf Politiburo amid heightened tensions over issues to do with factionalism and succession in the party.(AP Photo/Tsvangirayi Mukwazhi)

Despite his old age, Mugabe remains the glue holding together his fractious ZANU-PF, which dominates the political scene. He enjoys support from the military, an institution that has been a major pillar of his long rule.

Many Zimbabweans follow his health with keen interest, especially after assertions by Wikileaks that he might have prostate cancer – which he denied. With Mugabe having ruled for 36 years, some people fear the government could be paralyzed and the country riven by instability should he die without resolving the succession issue.

Last year he read out the wrong speech in parliament, which the opposition seized upon to question whether he was still of sound mind, though the president’s spokesman blamed his aides.

His reluctance to cede power could frustrate ZANU-PF grandees with ambitions for his throne.

Several leading party figures have presidential aspirations, but Emmerson Mnangagwa has been regarded as heir apparent to Mugabe. He was made vice president in 2014 following the sacking of Joice Mujuru, another faction leader who had been also tipped for the top job after holding the office for a decade.

Mnangagwa has since cemented his position by getting allies appointed to important cabinet posts and securing the tasks of reforming the economy and legal system.

But the vice president – nicknamed ‘Crocodile’, which he says reflects his ability to strike at the opportune time – is opposed by a group labeled G-40 by local media, comprising young government ministers and ZANU-PF members rallying behind Grace Mugabe, including the party’s women’s wing.

Grace is widely regarded in the party as another potential successor, even though she says she has no such ambitions.

The group says Mugabe should be allowed to die in office and has exchanged insults with Mnangagwa’s acolytes, accusing them of plotting to overthrow the president – charges they deny.

Mnangagwa himself has not responded to such accusations, but his allies in ZANU-PF and the military privately express unease at the influence that the First Lady wields on the president. They say the G-40 group is trying to isolate Mugabe from his old comrades.

At last week’s party rally, Grace said some unnamed people were plotting to physically remove Mugabe and harm his family, accusations similar to ones she made in 2014 against Mujuru, who was then regarded as the most likely successor to Mugabe.

The campaign against Mujuru led to Mugabe denouncing her before party loyalists as leader of a “treacherous cabal” bent on removing him from power, and firing her.

Grace Mugabe has hinted Mnangagwa may not be the chosen one after all.

“They go around saying Mrs Mugabe wants to lead, I am already in charge. Those that we thought could succeed him (Mugabe), we no longer have any confidence in them,” she said at the rally last week.

Mnangagwa did not respond to several requests for comment for this article.

The University of Zimbabwe’s Masunungure said the stage may have been set for Mnangagwa’s removal from office, little more than a year after Mujuru’s ejection. He said that would mean the two dominant factions that had vied to succeed Mugabe since 2000 would be purged from the party.

“The lesson for Mnangagwa is that you can quarrel, you can struggle among yourselves, as long as you do not commit the cardinal sin of wanting to take over while the president is still alive,” he added.

“I think that’s the red line for President Mugabe. Now the president is being told this guy has crossed that red line.”