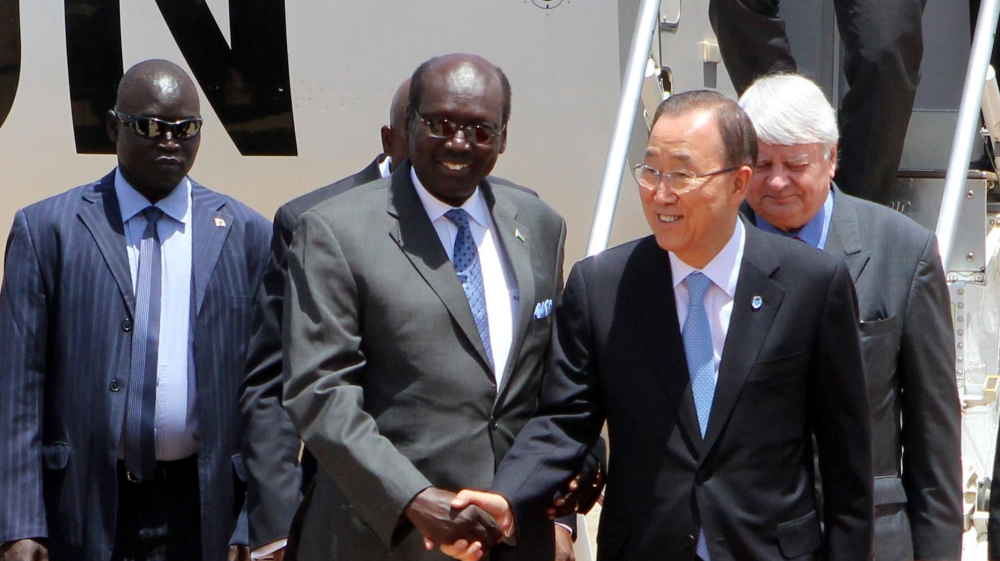 UN Secretary General Ban Ki-moon has arrived in Juba to push for the revival of a shaky peace deal that has so far failed to end South Sudan’s two-year-old civil war.

On Thursday, Ban was greeted at Juba’s airport by Foreign Minister Barnaba Marial Benjamin before being driven to see President Salva Kiir whose dispute with rival Riek Machar triggered civil war in December 2013.

Fighting has continued despite an August peace deal with at least 19 killed in the latest incident in the north-eastern town of Malakal last week when government soldiers participated in an attack on a UN-protected camp for nearly 50,000 civilians seeking shelter from the war.

“The fences are all open, you have to close the fences,” one displaced man, a resident of the camp, told Al Jazeera.

“Now look at this. The people’s health has deteriorated. People are just on the ground, their health is fragile. Look at what they eat and what they drink. Look at where they now sleep.”

The August deal, signed under international pressure, leaves Kiir as president and returns Machar to his old job as deputy, but in a sign of the levels of mistrust between the two men Machar remains in exile despite his reappointment earlier this month.

The battle for control of the country has repeatedly pushed South Sudan to the brink of famine, with millions of people dependent on the UN and aid agencies.

“You have huge presence of UN, you can see them here in Juba all over the place, but again, we don’t know what they’re doing exactly, Andrea Mac Mabior, an analyst at Kush Media, told Al Jazeera.

“You have seen what happened in Malakal. Civilians died, but the UN is there, then why are they given these millions of US dollars?”

The conflict has been marked by rights violations and attacks on civilians with children murdered or recruited into militias, women and girls abducted into rape camps and used as sex slaves, multiple ethnic massacres, attacks on UN bases and aid workers.

An African Union investigation published last year found evidence of forced cannibalism and concluded that war crimes had been committed.

A succession of UN rights reports have also found evidence of war crimes.

Neither Kiir nor Machar have faced any sanctions for the actions of armed forces under their command.

During his visit, Ban is due to visit a UN camp in the capital housing people uprooted by the fighting, some of the more than 2.3 million South Sudanese forced from their homes since the war began.