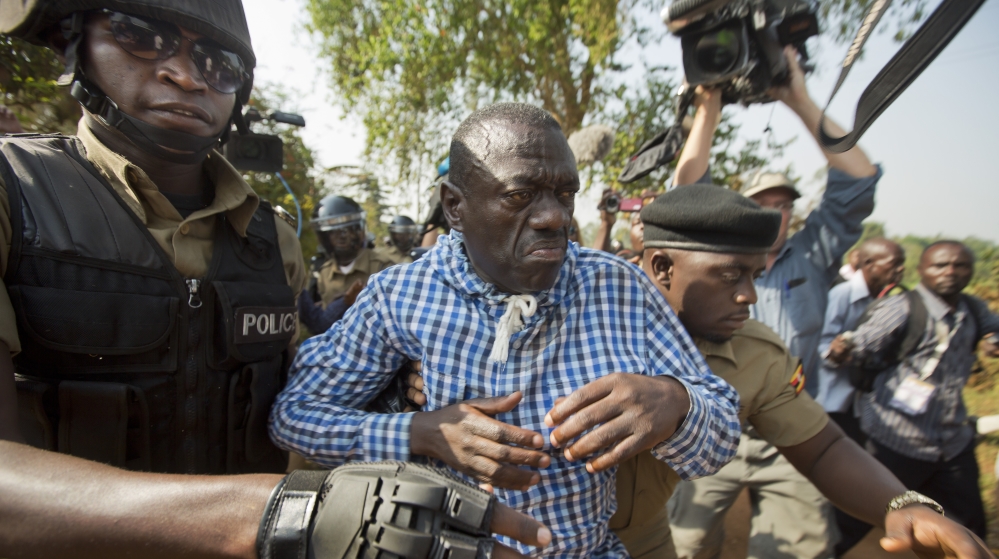 Ugandan opposition leader Kizza Besigye has been carted off to a police cell for the second straight day after he defied a house arrest order and tried to protest against presidential election results.

Besigye was on Tuesday grabbed by police outside his home on the outskirts of the capital Kampala, forced into a van and spirited away at high speed, his supporters told Al Jazeera.

Officials later confirmed he was being held at a police station and said they would continue with what they called a tactic of “preventative arrest” until the Forum for Democractic Change (FDC) party leader stopped trying to take to the streets.

President Yoweri Museveni, who seized power as the leader of a rebellion in 1986, was returned to office in last week’s vote with 60.8 percent of the ballot, the electoral commission said.

Besigye secured 35.4 percent, according to the results, in a poll that he alleged was rigged.

The 59-year-old opposition veteran had been brought back to his home by police late on Tuesday night after a previous attempt to leave the house on Monday and join supporters who had planned to march on the headquarters of the country’s electoral commission.

On that occasion, Besigye was dramatically bundled by police into an unmarked van, which then sped from the property pursued by other police vehicles, and cars carrying supporters and journalists.

Ibrahim Ssemujju Nganda, an FDC spokesman, told Al Jazeera that the police presence outside Besigye’s home appeared to have been beefed up on Tuesday.

Police said they were preventing Besigye from marching to the electoral commission, where he says he plans to collect official results, because he had not been given government permission.

“His behaviour is not appropriate and it is unnecessary given that the election commission has already agreed to issue an official tally of the results,” police spokesman Fred Enanga told Al Jazeera.

“Life is going back to normal in Kampala, businesses are re-opening and children are going back to school, and we cannot allow Besigye and his supporters to disrupt that.”

The FDC has said that any march would be peaceful, but authorities accused it of plotting to cause trouble.

Besigye, who was once close to Museveni and served as his field doctor during the war which brought the long-time president to power, has been detained five times in a little over a week.

He was arrested on election day as he tried to show journalists what he said was a vote-rigging operation in a suburban house, and he was held on a separate occasion when he tried to stage a rally in the centre of the capital.

A European Union observer mission said Thursday’s vote lacked transparency and had been conducted in an “intimidating” atmosphere.

US Secretary of State John Kerry phoned Museveni to voice his concern over the harassment of opposition figures and an apparent shutdown of social media services, the state department said.

Museveni, 71, dismissed accusations that the electoral commission favoured him and his National Resistance Movement (NRM) party and said he was unconcerned by the EU mission’s statement.

“I told those Europeans … I don’t need lectures from anybody,” Museveni said.