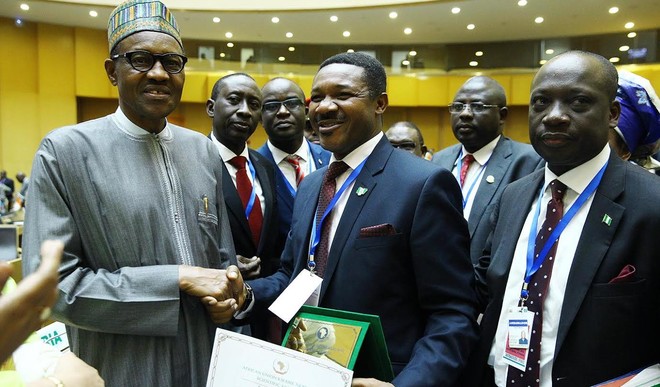 The award ceremony took place on Saturday 30th January 2016, during the 26th Session of the AU Assembly of Heads of State and Government, at the AU headquarters in Addis Ababa, Ethiopia.

The event was moderated by H.E Martial De Paul Ikounga, Commissioner for Human Resources, Science and Technology who explained that the Kwame Nkrumah Continental Scientific Awards is awarded at three levels – national, regional and continental with the objective to honour the African men and women in science who distinguished themselves by their contribution to African development through their work in the field of research and training. He added that the programme is a joint effort between the Commission and her Development Partners particularly the European Commission.

H.E Dr. Nkosazana Dlamini Zuma, Chairperson of the African Union Commission in her statement, underlined that Africa is a leading global player in terms of abundant human and natural resources, which if strategically capitalized will immensely contribute to Africa’s developing growth story. She added that the economic productivity of Africa is tightly linked to the scientific and technological skills of the African workforce. In this regard and in order to deliver on the rising aspirations of African citizens and global expectations, the AU Agenda 2063 is underpinned by Education, Science and Technology as enablers for achieving national, regional and continental development imperatives. (Please find full speech of the Chairperson on the AU website au.int).

Each of the awardees smiled home with a cheque of 100,000 USD to further boast their research capacity in the fields of Basic Sciences, Technology and Innovation and Life and Earth Sciences.

Speaking on behalf of the awardees, Prof. NYOKONG, Tebello expressed optimism that African scientist will make good progress towards a healthier and better Africa in the next decade, particularly in finding solutions to the biggest problems on our continent.