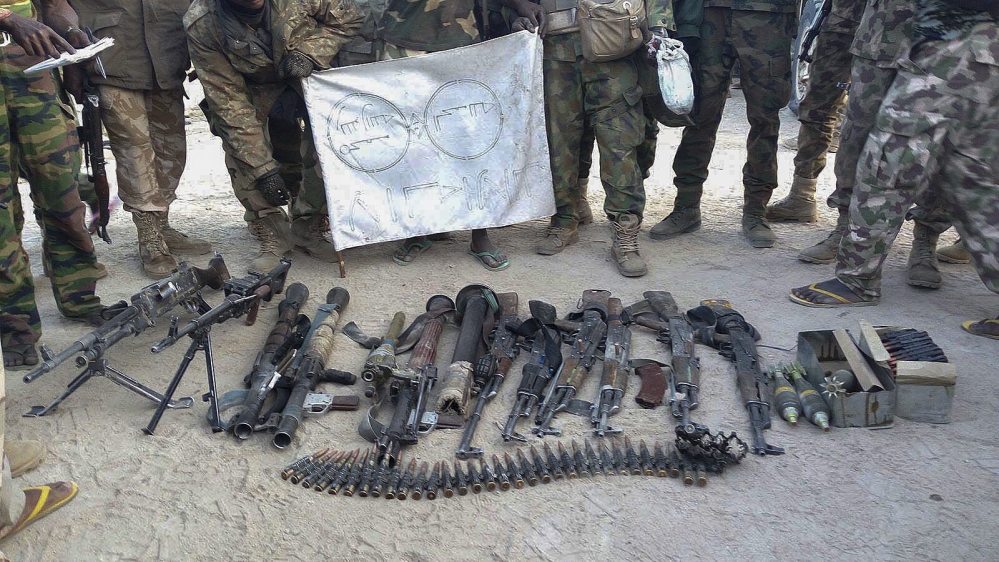 A young female suicide bomber was in military custody on Thursday in Nigeria after she aborted a plan to detonate explosives when two other girls blew themselves up and killed more than 70 people.

The double suicide attack – which also wounded nearly 80 others – targeted a camp for internally displaced persons on Tuesday in northeast Nigeria.

The detained girl told authorities she thought her parents might be in the camp and decided against the attack.

The bombings occurred in the town of Dikwa, some 80km northeast of Maiduguri, the birthplace of the armed Boko Haram group, which is fighting to create an Islamic state in the country’s northeast.

Al Jazeera spoke with former US ambassador to Nigeria Robin Sanders about Boko Haram’s changing strategy as Nigeria’s military pushes the group out of areas it once controlled.

Al Jazeera: Are we seeing a resurgence of violent attacks by Boko Haram?

Sanders: I think what we’re seeing is a difference in tactics. Boko Haram learns very quickly. They’ve moved a little bit from asymmetrical warfare, which the government was actually successfully trying to hinder in December, early January, to these guerrilla attacks that you see happening now – very similar in style to what Al Shabab is doing in East Africa.

So you do see this transition taking place and I think that the Nigerian army is going to have to adapt.

One other thing to add to the list of attacks is that there was also an attack in Zamfara, which is on the other side of the country. And it worries me that, possibly, Boko Haram is looking at doing two-front attacks in Nigeria – one in the west and one in the east.

Al Jazeera: Has the group lost any strength since the renewed international effort against it?

Sanders: I think that there’s a couple of things that donors as well as Nigeria probably need to think about – it’s really more long-term strategic planning.

Groups like Boko Haram and al-Shabab and others; they have long-range planning. You even see that with ISIL. And certainly the connection now that Boko Haram has with ISIL is something to be concerned about.

Because my understanding from my sources is that the leadership of Boko Haram now – at least in terms of tactical efforts – is really being driven by its connection with ISIL, and some of that information is coming through contacts with those in Libya, those in Tanzania.

And even as far away as Al Shabab in terms of how they do things a little bit differently – moving from this asymmetrical framework to more guerrilla tactics where they’re not holding on to territory but they’re still terrorising individuals.

Al Jazeera: What does the government have to do now to fight them with their renewed tactics?

Sanders: The main thing that I think has not happened is that the multinational joint taskforce that was supposed to be stood up toward the end of last year – it was announced in July 2015 and it has yet to be stood up.

It’s supposed to have about 8,700 forces. At the last AU [African Union] summit that happened a couple weeks ago – of the $700M that was pledged to the multi-national force, only $250M has been received, mostly from Nigeria and from France.

And when I say long-term planning I’m talking about two or three years, not something that’s just six months out because groups like Boko Haram have very long-term strategic planning – and the response has to be the same.

Communiqué on working visit to São Tomé and Príncipe