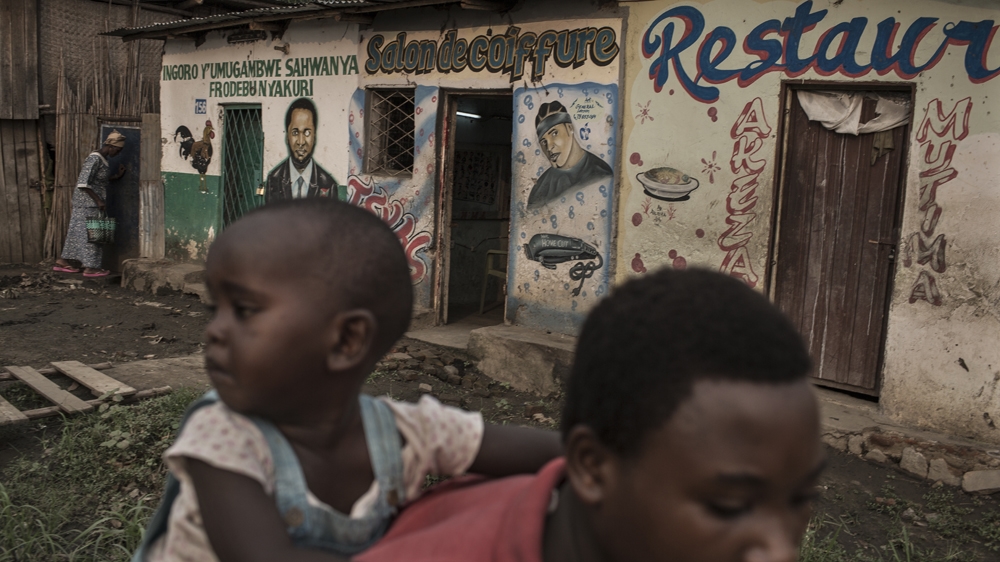 Bujumbura, Burundi – Scrolling through a folder of his work, Burundian cartoonist Alif pauses at a caricature of a journalist in the crosshairs of a rifle scope – an image that seems to sum up the dangers faced by those who continue to report on Burundi’s ongoing political crisis.

“A cartoon like this can say a truth that we cannot publish in words,” Alif explained. For the past five years, he has been working at the weekly Iwacu newspaper in the country’s capital, Bujumbura. His satirical cartoons and caricatures, along with those of his colleague Axel, are splashed across the pages of what is now the sole remaining voice of independent media in Burundi.

For safety reasons, both men use pen names.

“For me, the work we do is very important. But sometimes we are afraid because we know that what happened at Charlie Hebdo can happen here,” said Axel, referring to the January 2015 attack on the French satirical newspaper that left a dozen people dead.

While Iwacu, with its circulation of 3,000 copies, seems unlikely to be targeted by an international group, Axel’s concerns are not entirely unjustified.

Burundi’s once-thriving independent media was systematically gutted after President Pierre Nkurunziza announced his bid for a third term in office in April 2015, and, furthermore, after a failed coup attempt against his government the following May. In the wake of the putsch, independent media outlets and those seen as sympathetic to the opposition were attacked or shuttered.

In October of last year, Christophe Nkezabahizi, a cameraman with the state-run Radio Television Nationale du Burundi, was killed along with his family. A police spokesperson said they were caught in the crossfire while other reports claimed they had been targeted by security forces.

Esdras Ndikumana, the Burundi correspondent for Radio France Internationale and AFP, said he was beaten by members of the National Intelligence Service on August 2, 2015, after taking photos at the scene of the murder of the former intelligence services head, Adolphe Nshimirimana. Other journalists have been arrested and at least 100 have fled the country, according to the Committee to Protect Journalists.

The deputy presidential spokesperson Jean-Claude Karerwa said that Nkezabahizi’s death was not necessarily linked to his work as a journalist.

“In my opinion, it was an unfortunate, accidental death,” he said. “Nobody was targeting that journalist … it is simply a regrettable accident.”

Meanwhile, he said the government had “initiated inquiries to find those who are guilty” of the attack on Ndikumana, adding: “As a responsible government, we cannot tolerate this kind of behaviour in Burundi.”

Karerwa said the government encourages media and civil society to “work freely but in full compliance of the rules and regulations of the Republic of Burundi”.

“We want them to work, we know how helpful they are, but they should really help the people of Burundi to unite them, not divide them,” he said.

‘Passing on a message’

Iwacu’s editor-in-chief, Leandre Sikuyavuga, says there is a fine line between what can and cannot be published in the country’s current political climate.

“As the chief, I’m here to oversee all the journalists in order to ensure that we don’t publish something that will cause us problems,” Sikuyavuga explained, adding that the benefit of cartoons is that they are open to “interpretation”.

“People interpret cartoons differently. Someone may say: ‘This person in this cartoon is the president,’ and I can say, ‘But no, it isn’t,’” Sikuyavuga said.

“The cartoons are not about making the government angry. They are about passing on a message,” Alif explained. “Many Burundian people did not go to school, so they cannot read. But even uneducated people can understand caricatures.”

A country in turmoil

Burundi’s population is mostly made up of ethnic Hutus and Tutsis. The country’s civil war, which lasted from 1993 to 2005, saw brutal fighting between the army, led by ethnic minority Tutsis, and ethnic Hutu rebel groups.

Nkurunziza, a former Hutu rebel leader, has served as president since 2005. Last April, his announcement that he would seek a third presidential term plunged the country into political crisis and sparked opposition protests.

Following the failed coup attempt, Nkurunziza was re-elected in a July election that observers say was neither free nor fair.

On November 23, 2015, the government suspended the operations of 10 civil society groups and froze their bank accounts.

On January 15, a former Burundi defence minister and three other generals were sentenced to life in prison for their alleged roles the failed May coup. Nine other alleged conspirators were handed 30-year jail sentences, and eight others were given five-year terms, state radio reported.

Senior opposition politicians, civil society leaders and about 240,000 refugees have all fled the country.

Bodies in the streets

Meanwhile, young men suspected of participating in protests against the president’s bid for a third term and those suspected of even tenuous connections to the rebellion have been rounded up, jailed and even killed.

The government has “lashed out against anyone suspected of being an opponent”, said Carina Tertsakian, a senior researcher on Burundi and Rwanda at Human Rights Watch.

“Many have been killed by the security forces, for example, during police searches allegedly to look for weapons,” added Tertsakian. “Young men form the majority of the victims because the police suspect them of being part of the armed opposition.”

The UN has documented more than 400 deaths related to the political crisis, but said that the toll could be much higher.

On a recent operation in Cibatoke, police broke windows and kicked down doors as they searched houses for young men.

“Police came with a blacklist,” said a woman whose two sons had not been at home at the time of the search. “They said, ‘Tell your sons if we come back and we find them here, we will kill them.’”

“They check your ID, and if the name matches one on the blacklist, that’s it,” said another resident.

The frequent sight of bodies on the streets inspired one of Axel’s recent cartoons.

In it, children can be seen standing around the bloodied corpse of a man whose hands are tied behind his back. Some of the children cry while others laugh and point.

“We find people dead in the streets all the time with their hands tied behind their backs. When our children are seeing these things, I want to ask: ‘What is their future going to be like?’” Axel said.

Rumours that could ‘mobilise a million’

At the close of a UN Security Council trip to Burundi in January, the US ambassador to the UN, Samantha Power, said she had “personally raised concerns that independent media had been shut down” in Burundi.

“[An] independent media helps everyone because, then, people are not relying on rumour and falsehood and conspiracy theory, but they are hearing from independent sources,” Power said. “To shut down independent voices – it may be tempting, it may be something you think will be stabilising – but in the end, it will only have a destabilising effect.”

The Security Council and African Union (AU) are pushing Burundi to come to the negotiating table and accept an AU peacekeeping force, but Nkurunziza continues to balk at the notion and says that, without consent, such a force would amount to an “invasion”.

After failing to follow through on a threat to send 5,000 AU peacekeepers to Burundi with or without that consent, the AU earlier this month appointed a delegation of five African presidents to try and convince Nkurunziza to accept an African peacekeeping mission.

This comes on the heels of accusations that Rwanda is recruiting and training Burundian refugees as rebels, which Kigali denies.

If a solution is not found soon, Burundi’s political crisis could spill over into other countries in the region, a Burundian expert on security issues and political science said recently in Bujumbura.

“The conflict could become a regional one … due to the emergence of rebel groups,” he said, speaking on condition of anonymity.

At the moment, he said, the issue remains political but cautioned that “some political actors” in Burundi’s government were employing dangerous rhetoric and rumours to stoke ethnic tensions.

“They could use that discourse to mobilise a million people,” he said.

Back at Iwacu, Alif says that the spread of rumours on social media has indeed become a “significant problem” since the government closed down most of the country’s independent media.

“If Burundian people have to rely only on social media for their information, it could lead to civil war,” he reflected.

The post For Burundi’s cartoonists, the truth is a joke appeared first on African Media Agency.