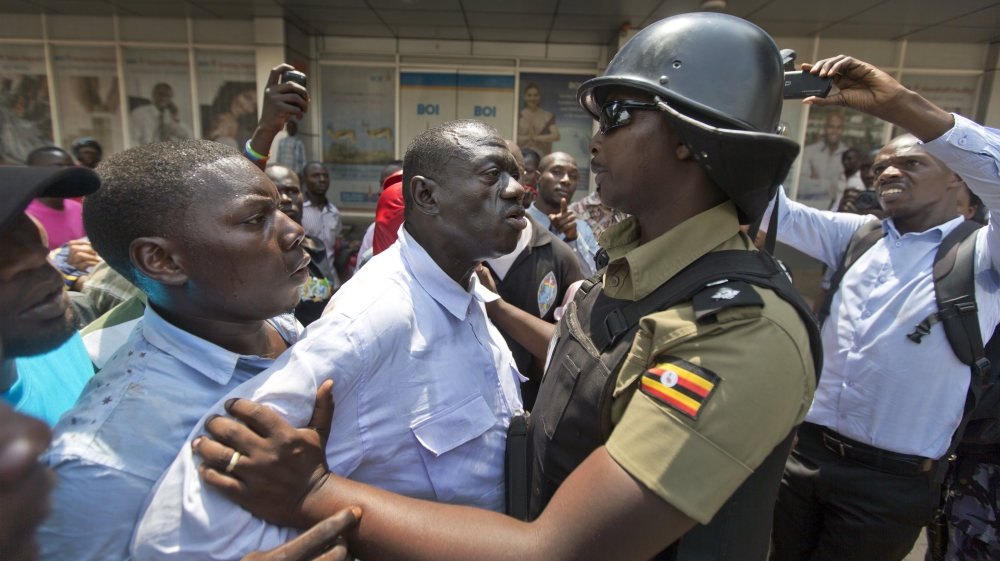 Clashes have erupted once again between supporters of Uganda’s main opposition leader Kizza Besigye and security forces in Kampala after Besigye was arrested for the third time in a week amid a general election overshadowed by allegations of government vote-rigging.

Police fired rubber bullets on Friday at protesters who hurled stones at officers outside the headquarters of the opposition party Forum for Democratic Change (FDC) in the Kenyan capital, following the detentions of Besigye, 59, and several other party members, including Mugisha Muntu, the FDC leader.

The opposition has accused the government of vote fraud as provisional results gave President Yoweri Museveni, 71, an early lead in the polls. Final election results are expected to be announced on Saturday.

IN PICTURES: Scenes from voting day in Uganda

The tension began after police stormed the FDC offices to prevent the presidential candidate and Muntu from delivering a press conference following his brief detention for alleging yesterday’s presidential and parliamentary elections were rigged.

“Police blocked off the FDC premises and began firing rubber bullets and in response several canisters of tear gas were thrown over the wooden gate of the party headquarters.”

A police spokesperson said the cordoning off of the FDC headquarters was necessary.

“We are in charge of this country and we have to enforce its laws. The FDC must fall in line with the laws and wait for the Electoral Commission to announce results.” said Andrew Kaweso, head of police human resources.

There were clashes between opposition supporters and security forces in other areas of Kampala.

Shooting was heard in some neighbourhoods and the streets in the surrounding areas of downtown Kampala were strewn with embers of fires, stones and rubber-bullet shells from the streetfights between opposition supporters and security forces.

Al Jazeera’s Malcolm Webb, reporting from Kampala, said that at least four people were seriously injured in the police crackdown and were sent to the hospital for treatment.

Partial results announced by the electoral commission showed Museveni had taken nearly 62 per cent of the vote – far ahead of Besigye with 33 per cent, after about 23 percent of the votes had been counted.

Election day on Thursday was dominated by claims of vote-rigging and a previous Besigye arrest when he and his supporters tried to show journalists what they said was a vote-rigging operation in a suburban house.

Besigye was also arrested on Thursday when police stopped him from campaigning in the centre of the capital Kampala, prompting his supporters to stage an impromptu angry protest.

The poll was also marred by delays in delivering voting materials, especially in areas seen as opposition strongholds, as well as a government shutdown of social media sites such as Twitter and Facebook.

Jonathan Taremwa, a spokesman for the electoral commission, told Al Jazeera the vote was “transparent” and “fair”.

“Where there was fracas and the vote was not able to continue we postponed it. As I speak to you now, voting is continuing in those polling stations. So all is settled and all is well,” he said.

Besigye was Museveni’s field doctor during the war which brought him to power, and served as deputy interior minister in his first cabinet.
He broke ranks with the president in 1999, saying Museveni was no longer a democrat.