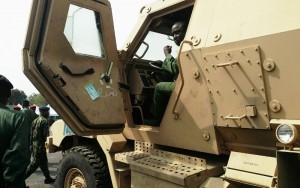 One of the armoured cars handed over to the Nigerian Army

As part of continuing support from the United States to the government and the people of Nigeria to defeat Boko Haram, the U.S. government today donated 24 Mine-Resistant Armor-Protected (MRAP) vehicles (valued at $11 million) to Nigeria’s military authorities.

The U.S. government donated the armored vehicles through the Excess Defense Articles Program.  The Nigerian military arranged for transportation from the port to Lagos.  Nigeria is in the process of receiving an additional eight (8) more MRAPs through this program, valued at approximately $7.4 million.

The Excess Defense Articles Program is designed to transfer excess military equipment from the United States to foreign governments or international organizations to help with modernization of partner nation military capabilities.

Through a similar program, the U.S. Government donated to the Nigerian Navy the NNS Okpabana in 2014 and NNS Thunder in 2012.  The two ships have bolstered maritime security in Nigeria.

Today’s equipment donation represents part of the continuing U.S. commitment to Nigeria and its neighbors to counter Boko Haram’s senseless acts of terror and promote regional security.  The United States provides advisors, intelligence, training, logistical support, and equipment to our African partners as they work to defeat Boko Haram.  We also support those affected by Boko Haram’s violence through ongoing humanitarian aid and victim support services.  The United States will continue working with our partners in the region to identify new opportunities to restore order in the Lake Chad Basin region.