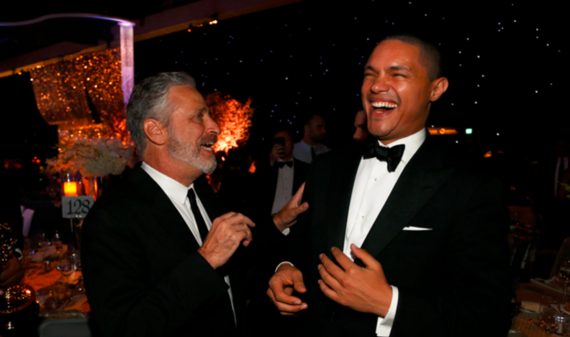 Last year was a tumultuous one for South Africa and the country faces an uncertain 2016. This prevailing mood does not bode well for South African society. But there are undercurrents that suggest otherwise – budding signs of a deepening democracy. One of these is the Trevor Noah comedic phenomenon.

Noah is a comic export to the American global television market as successor to the famous satiric host, Jon Stewart, on the highly-rated Daily Show. The show draws its comedy and satirical content from trending political news, cutting-edge debates and interviews with top politicians and influencers. Noah’s acclaimed hosting debut had 3.471 million viewers. In rising through the comedy ranks he has drawn on material from his turbulent childhood and ethnic experiences.

Noah has cracked the nod with his peers, a cosmopolitan audience and influential media critics. This is no mean feat for a homegrown 31-year-old of mixed race.

The Noah phenomenon speaks to an influential comedic revolution that is happening in South Africa.

Humor as social commentary and critique

Late-night talk shows and comedy clubs are increasing in popularity in South Africa. They involve a montage of humorous skits, jokes and amusing anecdotes often underpinned by incisive, satirical commentary. This comedic revolution is dominated by a growing number of young, black comedians. Like their peers worldwide, they are pushing the boundaries on controversial issues.

They search for material drawing from the messy business of “real” life, wrestling with topics relating to racism, sexism, prejudice, abuse and religiosity. Public and even iconic figures are considered fair game and there are no sacred cows.

Comedians are not idealists. But in the single-minded pursuit of their agenda – laughter – they inadvertently provide the sociopolitical critique that has the potential to activate transformation in society.

Satirical humor may be provocative, shocking and even offensive but it is considered fundamental in a free society. Charlie Chaplin observed that:

… the function of comedy is to sharpen our sensitivity to the perversions of justice within the society in which we live.

Comedic culture is deeply rooted in human history. Travelling minstrels and the court jester – forerunners of the stand-up comic – held up a satirical mirror to the ills of their medieval societies.

Satire, a specific genre of humor that goes deeper than ordinary humor, often brutally exposes the absurdity of the human condition, society’s hypocrisies and abuses of the polity. By stimulating critical awareness the satirist-comic comes to play the unintended role of activist and change agent in society.

Humor as therapy and a force for reconciliation

In an increasingly complex, high risk and conflict intense world there is much cause for anxiety and uncertainty. For South Africa, a post-conflict society grappling with issues of race, inequality and a weakening economy, these factors are pronounced.

The country’s stand-up comedians and satirical artists offer the opportunity to laugh, providing a Freudian catharsis – a release of emotional stress and tension – with therapeutic benefits. This comic release is beneficial in activating coping mechanisms to deal with the anxiety and insecurity of deeply divided societies.

Research has shown that humor can be used as a form of resistance and protest in times of intense conflict. Researcher Don Nilsen describes how Jews in Nazi concentration camps used humor to take some control of their own lives.

Humorous strategies are also powerful in exposing social injustice, subverting stereotypes and challenging assumptions. And the constructive role of humor to facilitate dialogue, nonviolent resistance and reconciliation is increasingly being documented.

Humor as a social corrective

The degree to which free expression a society allows its artists is seen as a significant indicator of its democratic character and maturity. As hallmarks of a robust democracy, satire and humor have special import in post-colonial and post-conflict societies.

Governments and rulers throughout history have tried to control the space occupied by satirists and cartoonists who shine a satirical light on their shortcomings. They perceive this as a threat to their power and position as well as inviting unwanted public scrutiny.

Developing economies often struggle with freedom of expression, especially when regime abuses and dominant discourses are challenged. The current South African government is no exception. President Jacob Zuma has provided a wealth of material for comedians, artists and cartoonists such as Zapiro.

More recently, however, the governing African National Congress appears to be taking an adversarial stance against artistic expression.

A revolution of comic proportions

Young, black, stand-up comedians such as Tumi Morake, Loyisa Gola, David Kau, Kagiso Lediga, Tats Nkonzo and many others are performing increasingly to black, middle-class audiences. Kau jokes that he no longer has to rely on white patronage because black South Africans have money and attend his shows.

Research in the US shows that comedic talk show hosts are prominent sources of political information. This is especially true among 30-35-year-olds. In 2007, the Pew Research Centre listed Stewart as the fourth-most-trusted journalist in America.

As with the #FeesMustFall movement it is fitting that the “comic revolution” is driven by young South Africans who are debunking myths and challenging political correctness with a sense of humor.