The debate is the thing. And President Yoweri Museveni missed it the last time – on Jan. 15. Another one is slated for Feb.10. Should he miss it again? The president and his advisors appear to say he should `dodge’ again. However, reactions to the last debate held at the Serena International Conference Centre in Kampala show what he stands to lose – not least the three hours of free airtime offered to all the seven presidential candidates that debated.

From the lofty opening speech and poem of the leader of the organising Elders Forum, Justice James Ogoola, to the humorous performance of former Prime Minister Amama Mbabazi and the comical Elton Joseph Mabirizi, the debate has been positively received – except by the Museveni camp. Speaking to journalists two days after the debate at his country home in Rwakitura, Kiruhura district, Museveni said debating should be left to high school children. “This system of going into competitions for speaking is for high school,” he said. He also criticised it as a foreign idea, imported by the organisers without a clear purpose.

As the debate raged, Museveni was away in his country-home in Rwakitura, meeting with his party Women’s League leaders after a frenzied day in which he had held four rallies. In all, he had spoken for over six hours – a tough day’s work. But he was satisfied. The crowds that turned out were huge, excited, and colourful in their subflower yellow T-shirt, visors, and scarfs. As they waved Museveni’s yellow paper campaign posters that looked like a swarm of flying insects above their black heads, Museveni was convinced to trust in the crowds.

But there could be a will-o’-wisp in the numbers game. The three rallies he held possibly had 100,000 people each, which is just 8% of the 4 million he would have addressed if he had attended the televised debate.

According figures from Museveni’s ministry of Finance, up to 37% of Ugandans are now in the middle class or TV owning class. That is about 11 million people. Add to that the crowds that throng bibanda – the video hall that televise most important events for a small fee. Even if one used the conservative estimation from the National Planning Authority that puts the elite population at about 4 million or about 10% of the productive population, the numbers are worth Museveni’s attention. In a recent poll done by the respected polling firm Research World International, Museveni’s main challenger – Kizza Besigye- is ahead of him in this segment of voters.

But Museveni is not the first powerful politician to fear debate. 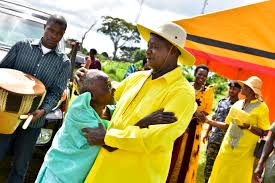 President Museveni with an elderly woman after addressing a rally at Kiyunga Town Council, Luuka

According to the late Prof. Ali Mazrui, in his book; “Political values and the educated class in Africa”, the fear of debate could have led Kenya’s first president, Jommo Kenyatta, to avoid joining the country’s first parliament. On page 75, Mazrui writes: “In the words of his biographer, Murray-Brown, `Kenyatta was never at ease in English debating circles and he would have been at a disadvantage among the hostile settlers in that chamber’”.

Unlike Kenyatta, Museveni is quite comfortable in English. But while comparing Kenyatta’s weakness to the debating prowess of Uganda’s first Prime Minister, Milton Obote, Mazrui makes an important distinction that President Museveni and his advisors should consider .

Mazrui writes on the same page 75: “Milton Obote of Uganda was a more accomplished debater than Jommo Kenyatta of Kenya, and yet Kenyatta was at the same time a greater orator at open rallies than Obote would ever be”.

The presidential debate showed exactly this point; that a speaker could be a great debater but not an orator and vice versa. There is no doubt that Museveni is a great orator, but how is he as a debater? That is a question many voters want to see and many are disappointed that Museveni keeps dodging.

According to a Reuters report after the debate, some voters said Museveni, who seldom submits to interviews, is “a coward”.

“Museveni could not withstand taking tough questions,” said Nassimbwa Hamidah, a Besigye supporter, according to the Reuters report.

With Museveni absent, his former ally turned foe, Amama Mbabazi, bore the barrage of questions demanding accountability for the commissions and omissions of the ruling party over the 30 years it has been in power.

“Can you comment on the so-called safe houses in which Ugandans were tortured while you were prime minister and minister of Defense?” asked moderator Allan Kasujja on loan from the BBC as his co-moderator, Nancy Kacingira, fought back a quizzical smile and Mbabazi attempted to parry the onslaught with characteristic deadpan humour.“You have been in government with Museveni for 30 years and now want to be the president, what will be different?” asked Kacungira, also from the BBC.

“The difference will be that I will be the president,” Mbabazi quibbled, and the crowd of invited dignitaries roared.

In the end, although Mbabazi appeared stirred but not staggered, he had the worst night of the debate partly because of the high expectation of him. When he was at one point heckled, he once again sought recourse in dumb humour.

“I was expecting a point of order,” he quipped.“This is not parliament,” Kasujja barked at him and Mbabazi’s wry smirk dried on his lips.

In a country without an established culture of straw polling of the public over such events, it is difficult to say if voters are likely to punish Museveni for dodging the debates. –

“No voter is going to change because of the debate,” thundered the NRM and government spokesman, Ofwono Opondo, on the early morning Capital Gang FM radio show. His sidekick, Chris Baryomunsi – who is a Minister of State for Health, said the show amounted to nothing more than Friday Night comedy. –

Yet even by Ofwono’s own admission, his children of voting age formed new opinions of some of the candidates because of how they performed at the debate. “My daughter who is in Namagunga and son who is at university said Bwanika and Biraaro were quite good,” he said on the show –

Even before the night debate ended at 11pm, over 10 memes ridiculing President Museveni’s dodging the debate had been circulated on social media. Many more followed as the night wore on. –

If Museveni is looking to see if the debate can change anything, he might also look at the only woman in the race, Maureen Walube Kyalya, Elton Joseph Mabirizi, and Amama Mbabazi. These three possibly had the worst showing. Museveni’s main challenger, Kizza Besigye and Prof. Venansius Baryamureeba went in as strong contenders and did little to change that impression. –

Anecdotal evidence suggests that the two who have been getting rave reviews since the debate are independent candidate, Abed Bwanika, and Uganda Farmers Party (UFM) candidate, retired Maj. Gen. Benon Biraaro. –

Bwanika is a three-time contender in the presidential race, and was a little known to the public, although the grasp of issues he showed during the debate was a surprise to many viewers. –

Gen. Biraaro, on the other hand, was a totally new entity –

Although he has been traversing the country since he was nominated in December 2015, few Ugandans have been paying attention to this soft-spoken gentle giant, with wide white eyes, thick lashes, and dark well-cropped hair that is greying at the temples. Biraaro stood taller than all the other candidates at the debate – in stature, composure, and novelty and pitch of his ideas. It is unlikely that a single debate can hand Biraaro the presidency but, if no viewers knew him going into the debate, coming out of it, few of them are likely to write him off.According to several people that The Independent spoke to, going into the debate, Maureen Walube Kyalya and Elton Joseph Mabirizi were trailing in popularity. That the debate buried them was just as surprising as the shallowness of their presentation.

“Is Mabirizi a real engineer,” was a trending question after the debate. He possibly is not. His only known qualification is that he is a renowned Christian evangelical preacher of the type usually called `pastor’. He also allegedly has a diploma in electrical engineering from an institute in Kampala.

Museveni’s handlers claim participating in the TV debate elevates such challengers to the level of equals with him. But the assumption is that Museveni’s level can only either stay constant or sink. This argument rejects Museveni potential to sour so high at the debate that his knowledge, oratory, and style simply shows how far below him Besigye, Mbabazi and the others are – thus elevating him even farther.

Secondly, winning over the `elitist audience’, Museveni’s group say pays attention to the debate is critical. Observers also argue that Museveni’s biggest loss from not attending the debates is symbolic. They say that as a man from the military – an institution not known for lofty debates, Museveni needs to embrace democratic practices. They say Museveni fought the 5-year Luweero bush war that brought him to power as a defender of democracy. He argued that the 1980 presidential election had been rigged in favour of Milton Obote. Unfortunately, some of Museveni’s behavior since he came to power has clipped away his credentials as a democrat. Fearing to debate his challengers is the latest.

Debating is important among democrats because a lot of politics involves communication and transmission of messages, especially verbally. The unwillingness of leaders to debate national issues leads to a narrowing of avenues for freedom of speech and consolidation of unfair or dictatorial tendencies. Only the military “rely more on the gun than on the gift of the gab,”