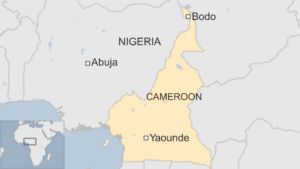 At least 25 people are reported to have been killed after suicide bombers struck a town in northern Cameroon near the border with Nigeria.

A local official said many of those who died had been in the market in Bodo. At least three suicide bombers were said to be involved.

The Nigeria-based militant group Boko Haram is suspected of carrying out the attack.

Cameroon is part of a regional coalition fighting Boko Haram, along with Nigeria, Niger, Chad and Benin.

Although the militants have been driven from most of the areas they controlled in north-eastern Nigeria, they have continued to carry out suicide bombings and raids into neighbouring countries.

One witness in Bodo told the BBC that at least two of the attackers were teenage girls who had hidden their explosives in sacks of grain.

Another witness said two blasts had hit the market and another had targeted a roadblock.

“We were in the market [at] around 10 in the morning when we heard a blast. The second one went off not more than two minutes after and we took to our heels,” the witness said.

“There is a vigilante roadblock just outside town where another bomb went off and killed six people.”