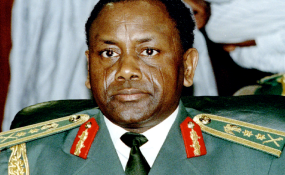 The government of Switzerland is prepared to transfer to the Nigerian government, another $300 million recovered from the family of former military ruler, Sani Abacha, foreign minister, Geoffrey Onyeama, announced Monday.

The money is part of an estimated $5 billion stolen and stashed in foreign accounts by the late dictator.

Nigeria has in the last 10 years received over $1 billion from the Swiss and American governments, but there are growing concerns past administrations misused the huge sum.

PREMIUM TIMES reported in December 2015 how former finance minister, Ngozi Okonjo-Iweala, with the approval of former President Goodluck Jonathan, authorised the diversion of at least N61.4 billion ($300 million and £5.5 million) from funds recovered from Mr. Abacha, to the Office of the National Security Adviser, Sambo Dasuki, few weeks before the 2015 presidential election.

The former minister said the money, which was not approved by the National Assembly, was meant for purchase of military equipment for the fight against Boko Haram.

The money is believed to be part of at least $2.1 billion slush fund later distributed by Mr. Dasuki to politicians ahead of the polls. An ongoing investigation into the scandal as led to the indictment of several high profile figures.