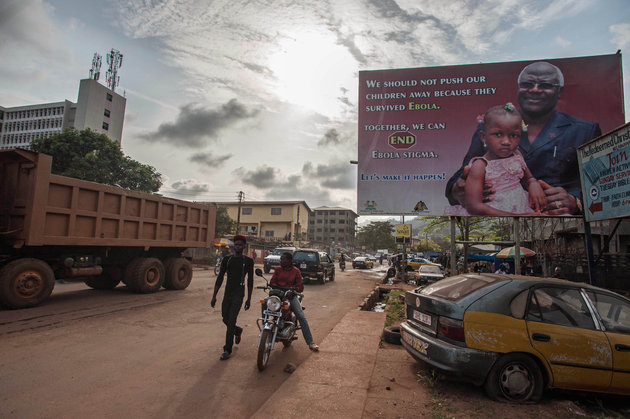 A man walk past a poster reading ‘We should not push our children away because they survived Ebola’ forming part of Sierra Leone’s Ebola campaign in the city of Freetown, Sierra Leone, Friday, Jan. 15, 2016. A corpse has tested positive for Ebola in Sierra Leone, an official said Friday, the day after the World Health Organization declared the outbreak over in West Africa. (AP Photo/Aurelie Marrier d’Unienville)

More than 100 people have been quarantined in Sierra Leone after coming in contact with a woman who died of Ebola last week, highlighting the potential for the disease to spread, just as the deadliest outbreak on record appeared to be over.

The World Health Organization (WHO) last week declared that “all known chains of transmission have been stopped in West Africa” after Liberia joined Sierra Leone and Guinea in going six weeks with no reported new cases of Ebola. At the same time, it warned of possible flare-ups as survivors can carry the virus for months.

Just after the WHO announcement on Thursday, tests revealed that Mariatu Jalloh, a 22-year-old student, died of Ebola on Jan. 12. Her death has concerned health experts because authorities failed to follow basic protocols, according to a health report seen by Reuters last week.

The report stated that she lived in a house with 22 people while she was unwell. Five people were involved in washing her corpse, a practice that is considered one of the chief modes of Ebola transmission.

The Ministry of Health and the Office of National Security said in a joint statement that 109 people have so far been quarantined, 28 of whom were high-risk cases.

“An active case investigation continues in the four districts where the young woman was known to have traveled,” the statement said.

The source of the transmission remains unclear, though in late December the woman traveled near to the border with Guinea, one of the country’s last Ebola hot spots before it was declared Ebola-free on Nov. 7.

The case is a blow for Sierra Leone which, alongside Guinea and Liberia, has borne the brunt of a two-year epidemic that killed more than 11,300 people.

It has also caused anger. In apparent frustration at the latest case, the homes of some high risk patients were attacked this weekend in Magburaka, the city about 200 km (120 miles) east of Freetown where Jalloh died, and in one case a hut was burned down, according to a local leader.

“We do not know who is behind this, but we are shocked that anyone would do this in view of what Ebola has done to our country,” the chief said.

The unrest comes after demonstrators last week accused the health department of negligence at a local hospital that saw Jalloh as an outpatient before she died.