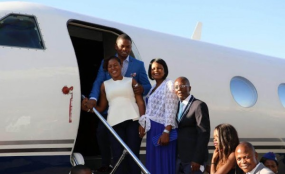 The saying is strong, ‘who God blesses no man can curse.’ Leader and founder of the Enlightened Christian Gathering ECG Church Prophet Shepherd Bushiri continues to walk in the path of glory after sealing another breath-taking deal with South African Aviation company Nac for the acquisition of his third Jet, ZS-VIP.

The Malawian born Prophet, alias the ‘Major 1’ currently based in South Africa has acquired a third jet in a space of three years.

The unveiling ceremony of the new jet ZS-VIP was presented by a biggest Company of Aviation NAC in South Africa on Wednesday 6th January, 2015 .

The handover ceremony was presided over by Gulf Stream Manager Larry Flynn.

During the ceremony, Bushiri, who is popularly known as ‘Major 1’ received a certificate from Gulf Stream Manager Larry Flynn for becoming the youngest buyer of Gulf Stream jet.

Bushiri dedicated the new jet to all the people who follow him and understand his vision.

Speaking to Nyasa Times via phone, Bushiri could not hide his excitement and explained that his recent decision to be the Jet simply represent the vision he has.

“Am a man of God and I believe I need to leave by example. I teach the word that strengthen s the faith of ‘I can do all things through Christ who strengthens me,’ and that exactly what am doing now. I am what God says I am and not how other people judge me. I believe to inspire a lot of Christians out there more especially fellow men of God. We can do it because greater is he who lives in us,” said Bushiri.

This comes after the man of God recently made another inerasable history when he filled the largest stadium in Africa during 2015-2016 Crossover dubbed as the Lion of Judah Night.

Bushiri has of late become one of the richest pastors in Africa and he the richest person in Malawi, a country of his origin. He is popularly referred to as the “Major 1” in Christian cycles especially among his followers.

Few weeks ago, Nyasa Times also carried a story, revealing that the man of God plans to launch a bank and a mobile company in South Africa, news that was confirmed to be true by the Prophet’s Public Relations Officer Mr Kelvin Sulugwe.

“I am what God says I am. I was born a winner. This goes to people who understands my vision. This is not for me but to those who believe in better things” Bushiri said.