Zimbabwe President Robert Mugabe and Equatorial Guinea President Teodoro Obiang Nguema Mbasogo say Africa wants to see reforms enacted at the U.N. Security Council and they want the continent to be given at least one spot as a permanent member. The call came at the end of a visit to Zimbabwe by Nguema and ahead of an African Union General Assembly later this month.

Mugabe — who is handing over the rotating AU chairmanship — said his Equatorial Guinea counterpart ,Teodoro Obiang Nguema Mbasogo, was in Zimbabwe because of the upcoming African summit in Ethiopia.

“On the event of the meeting of the African Union, he [Nguema] saw it meet to discuss what our position is regarding various matters. The issue of the reform of the U.N. Security Council and our position as Africa. Then the issue of peace and security in Africa and terrorism.”

Nguema said there was need for African leaders to translate political independence to economic independence. He said Africa’s leaders must work today to ensure that this becomes a reality. On the issue of the U.N. Security Council, speaking through an interpreter, Nguema said reforms should be taken seriously.

“Concerning the reforms of United Nations Security Council which Africa is gunning for; we are asking for two seats of the security council of the United Nations. But if we are not given two, let us be given one with full recognition of members with right to veto. I think that is the revolution which Africa looks for.”

Russia, Britain, China, France and the United States are the permanent members of the U.N. Security Council. Now Africa — as a continent —  wants to be represented in that powerful U.N. group. 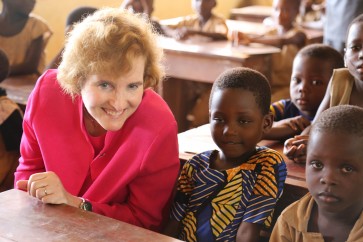