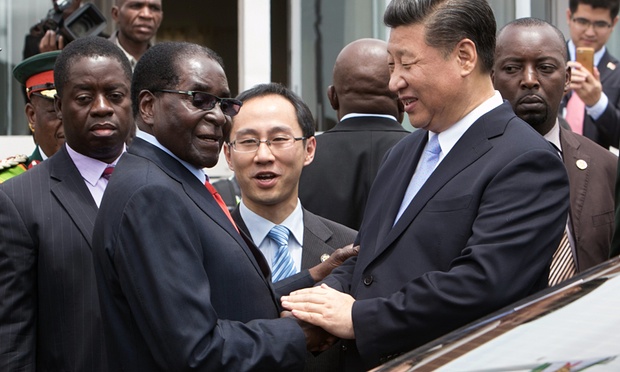 Robert Mugabe shakes hands with Xi Jinping as the Chinese president arrives in Harare[/caption] Want evidence that China is still making inroads in sub-Saharan Africa? Look no further than Zimbabwe, where the finance minister just announced a plan to begin using the Chinese yuan as an official currency within the southern African nation — part of a deal in which Beijing will also cancel about $40 million in debt. “There cannot be a better time to do this,” Zimbabwean Finance Minister Patrick Chinamasa explained in a statement. The news is just the latest wild twist for the Zimbabwean currency. Six months ago, Zimbabwe’s central bank announced that it was finally phasing out the local currency, the Zimbabwean dollar, after years of hyperinflation had left the currency virtually worthless. Zimbabweans were told that they would be able to exchange bank account balances of up to 175,000,000,000,000,000 Zimbabwean dollars for just 5 U.S. dollars – a heartbreaking sum, given that it was many people’s life savings. In practice, the Zimbabwean dollar (and the $100 trillion notes that it eventually required) had already become little more than a kitsch souvenir. By 2008, foreign currencies such as the U.S. dollar and the South African rand had become de facto currencies thanks to a booming black market. The following year, the government announced that it would officially allow businesses to use these currencies, effectively abandoning the Zimbabwean dollar. The new agreement would add the yuan to the list of currencies used for public transactions, and the Zimbabwean government said it would encourage its use. In the first stages of the plan, Reuters reports, Chinese tourists would be allowed to use the yuan to pay for services, and Zimbabwe would begin paying back its loans to China in the currency. The new switch may have other side effects, too: In recent months, some Zimbabwean economists had argued that the country should increase its use of the Chinese currency in a bid to get around U.S. sanctions. The move carries important symbolic weight in China. In recent years, the Beijing has pushed to internationalize its currency, with a fair degree of success. Late last month, the International Monetary Fund’s Executive Boardvoted in favor of acknowledging the yuan as one of the world’s top currencies. However, the move’s practical effect on the average Zimbabwean is hard to predict. At present, the majority of transactions in the country take place with U.S. dollars, though the situation (and supply of hard cash) varies across different regions. If anything, the deal is further evidence of the lengths that strongman Robert Mugabe, long isolated by much of the Western world, is willing to go to secure the future of his relationship with China. The Chinese government, which touts its “non-interference policy” in trade and aid relationships, has given Zimbabwe more than $1 billion in low-interest loans in the past five years, and Mugabe has considerable personal ties to Hong Kong. Zimbabwe was the first stop on Chinese President Xi Jinping’s tour of Africa this month, andMugabe greeted him by saying, “China is Zimbabwe’s all-weather friend.” Notably, a Chinese group with murky ties to the government awardedMugabe the Confucius Peace Prize – considered the Chinese version of the Nobel Peace Prize – in October, despite the Zimbabwean leader’s long-standing reputation for human rights abuses. *Source Washington Post]]>