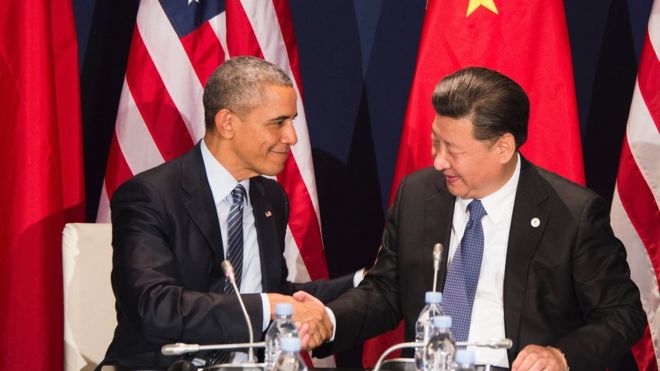 China’s President Xi Jinping and US President Barack Obama have both made major speeches in Africa this year. President Xi spoke last week to heads of state at a summit in Johannesburg, South Africa, and in July President Obama spoke at the African Union headquarters in Addis Ababa, Ethiopia. Their oratory show some remarkable similarities and some interesting differences.

Both leaders spoke about past relations with the continent. President Xi: “What has made China-Africa friendship durable and vigorous is that our two sides have always been guided by the principle of treating each other as equals… China and Africa will forever remain good friends, good partners and good brothers.” President Obama: “As president, I’ve worked to transform America’s relationship with Africa – so that we’re truly listening to our African friends and working together, as equal partners.” Both presidents used the word “partners” but there is still a difference. Africa analyst Aubrey Hruby says that China is able to emphasise the shared development experience with Africa, whereas the US has had to work harder at making the equal partnership a reality.

Speak up or keep quiet?

Despite talking about Africa solving its own problems, the US president said that he would not be afraid to bring up human rights issues, while the Chinese leader underlined China’s policy of non-interference. President Obama: “The bottom line is that when citizens cannot exercise their rights, the world has a responsibility to speak out. And America will, even if it’s sometimes uncomfortable, even when it’s sometimes directed toward our friends.” President Xi: “We should respect each other’s choice of development path… China strongly believes that Africa belongs to the African people and that African affairs should be decided by the African people.”

How to do business

President Obama’s trip to Africa this year was timed to coincide with the Global Entrepreneurship Summit in Kenya. Ms Hruby says he came with a message of private business development and brought potential investors with him, whereas President Xi emphasised big infrastructure development. President Obama: “Entrepreneurship creates new jobs and new businesses, new ways to deliver basic services, new ways of seeing the world – it’s the spark of prosperity.” President Xi: “We should fully leverage the strengths of political mutual trust… and focus on industrial capacity cooperation as well as… industrialisation.”

Both leaders felt it necessary to name-check the late South African President Nelson Mandela, though they chose quotes which emphasised different issues. President Xi: “President Nelson Mandela… said: ‘We stand at the dawn of an African century, a century where Africa will take its rightful place among the nations of the world.’ I couldn’t agree more with this statement.” President Obama: “Nelson Mandela taught us ‘to be free is not merely to cast off one’s chains, but to live in a way that respects and enhances the freedom of others'”.

Both men chose to link security and development and were keen to offer their country’s help. Again, their emphasis was slightly different: President Xi: “Poverty is the root cause of chaos while peace is the guarantee for development… China stands ready to take an active part in Africa’s efforts in capacity-building for maintaining and strengthening peace and security.” President Obama: “Africa’s progress will also depend on security and peace… Now, as Africa stands against terror and conflict, I want you to know that the United States stands with you.”

These word clouds were generated from the two men’s speeches:   *BBC]]>