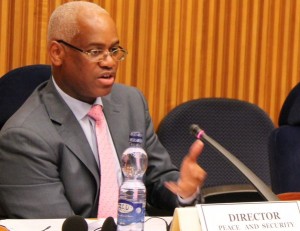 El Ghassim Wane[/caption] United Nations Secretary-General today announced the appointment of El Ghassim Wane of Mauritania as Assistant Secretary-General for Peacekeeping Operations. He will succeed Edmond Mulet of Guatemala, whom the Secretary-General has appointed as his Chef de Cabinet. The Secretary-General reiterates his deep gratitude and appreciation to Mr. Mulet for his dedicated service in his former position. Mr. Wane brings extensive experience on peace and security issues and conflict resolution, particularly in Africa in partnership with international and regional organisations, at a time when United Nations peacekeeping has reached a historic high in terms of levels of deployments of civilian and uniformed personnel and complexity of mandates. As Director at the Peace and Security Department of the African Union Commission in Addis Ababa since 2009, Mr. Wane has discharged this function at a time when the cooperation and partnership between the United Nations and the African Union on peace and security issues in Africa has been deepening and expanding.  Between 1994 and 2009, he held a series of senior positions related to peace and security in the African Union and its predecessor, the Organisation of African Unity, including Head of the Conflict Management Division, Senior Political Officer, Deputy Head of the Conflict Management Centre and Political Officer at the Refugees, Displaced Persons and Humanitarian Affairs Division and Spokesperson of the African Union on peace and security issues. Born in 1959, Mr. Wane holds Masters Degrees in Public Law, and International and European Studies from the Universities of Dakar in Senegal and Lille II in France, respectively.]]>