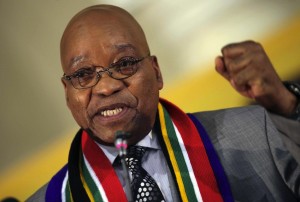 JOHANNESBURG — As Jacob Zuma retreats to his rural home in the green hills of KwaZulu-Natal for the holidays, a growing number of South Africans, including some of his own comrades in the ruling African National Congress (ANC), are wishing he would just stay there for good.

It has been an astonishing few weeks for the South African presidency. On Dec. 10, Zuma shocked the country and even his own cabinet by firing Nhlanhla Nene, a respected finance minister who had pushed back against gross overspending, appointing an unknown backbencher in his place. Days later, and clearly under pressure, Zuma reversed course and announced that Pravin Gordhan, who had previously served as finance minister in 2009-2014, would be returning to the post. But the damage was already done: The episode had sunk the rand, South Africa’s currency, to record lows, shaking investors’ faith in the economy — and the ANC’s faith in Zuma.

The populist Zuma has never been loved by urban, middle class — and in particular, white — South Africans, but for the first time since he took office in 2009 thousands of them took to the streets to showcase their discontent. In Johannesburg, Cape Town, and Pretoria, anti-Zuma demonstrators marched on Dec. 16 as part of a campaign dubbed #ZumaMustFall on social media (the name echoed earlier student-led protests over the rising cost of university tuition that were organized under the #FeesMustFall hashtag.)

“Thanks for your service, Mr. Zuma. Now please retire to Nkandla, our gift to you,” read one sign brandished by a protester in Johannesburg. The sign was doubly tongue-in-cheek: Nkandla is the site of the president’s palatial private residence, which recently received a controversial $16 million taxpayer-funded upgrade, complete with a swimming pool and cattle corral. Potentially more significant than the protests is the growing dissent Zuma’s missteps have engendered within the party. A number of ANC veterans, including former Health Minister Barbara Hogan, have broken ranks to publicly criticize Zuma in recent weeks. Some of these party loyalists had been willing to look the other way on previous excesses, like the house in Nkandla, but the feeling, as Hogan put it, was that Zuma had “crossed a line” by firing Nene. Nene had opposed excessive government spending, including on a $66 billion nuclear deal with Russia reportedly brokered by Zuma. He had also sought to rein in the ailing parastatal South African Airways, whose board of directors is chaired by Zuma’s close friend Dudu Myeni. (So close are Myeni and Zuma, in fact, that the president’s office has officially denied that the pair had “a romance and a child.”) While Zuma has always had a reputation for nepotism, members of his own party increasingly view him as reckless, the kind of leader who would play musical chairs with a crucial government position without regard for the consequences. And South Africa can ill afford economic turmoil: GDP is expected to expand just 1.4 percent in 2015 and official unemployment stands at around 25 percent (the real number is closer to 35 percent when discouraged jobseekers, who have simply given up looking for work, are taken into account). Meanwhile, South African farmers are grappling with one of the worst draughts in years, and food prices are expected to rise next year as a result. “It’s time he left us, it’s time he went to Nkandla,” Ben Turok, an ANC stalwart and veteran of the anti-apartheid struggle, told the local talk radio station Power FM on Dec. 15. “He has a nice house in Nkandla and we forgive him all the sins. Let him go settle down with his cattle, his kraal [corral], swimming pool and have a lekker [nice] retirement — we don’t need him in office anymore.” Gordhan’s sudden re-appointment as finance minister came after an emergency meeting of the ANC’s top leadership during which the president reportedly came under pressure to reverse course. A statement issued later by the party claimed that Zuma’s about-face was “occasioned by public concern stressing the need for experience and market assurance on the person who will champion the finance and fiscal policy of the country.” (Zuma himself said he had been “listening to the people.”) Not everyone sees it that way. Susan Booysen, an academic who has written extensively about the ANC, said that Zuma had been slapped down, with even his closest supporters realizing that he had overstepped. “I think this was a serious case of a president who was starting to act too presidential, as if he was a force in his own right, and forgetting that he really depends on the ANC for his support,” Booysen said. Unlike the primary system used by American political parties, there is no open campaigning within the ANC. But a low-key battle to succeed Zuma is already underway, though his second and final term as president doesn’t end until 2019. Zuma, a polygamist with four current wives, has been promoting his ex-wife, Nkosazana Dlamini-Zuma, the current African Union chairwoman, as a successor. The two remain on good terms and have children together. Support for Dlamini-Zuma is widely seen as an attempt to extend Zuma’s political influence and ensure protection from possible corruption charges after he leaves office. The refrain, heard within some corners of the party, that “South Africa is ready for a woman president,” is arguably less about having a woman in charge than it is about supporting Zuma and his preferred successor as president. The other main contender to succeed Zuma is his deputy, Cyril Ramaphosa, a former union leader and business magnate who returned to politics in 2012. Ramaphosa has the backing of the powerful trade unions, whose members argue that as the deputy president of the ANC he should succeed Zuma as the leader of both party and country. The mess surrounding Zuma’s appointments to the Finance Ministry could be a boon for Ramaphosa, who in the past few weeks has been “elevated in the succession stakes,” according to Booysen. “I think he will want to position himself as the anti-Zuma candidate,” she said. [caption id="attachment_23276" align="alignright" width="300"] 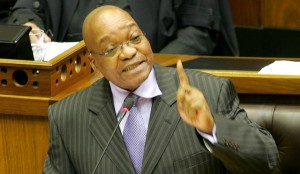 Jacob_Zuma[/caption] An anti-Zuma candidacy could prove to be a winning strategy. The president has grown increasingly unpopular even among supporters of the ANC, which was returned to power in last year’s general election with 62 percent of the vote. A recent survey by Afrobarometer, a research network involving African think tanks and academic institutes, found that Zuma’s public approval had dropped from 64 percent in 2011 to just 36 percent today. “A majority of citizens of all race groups disapprove of his performance in the past year,” the Afrobarometer report said.

But the problem is bigger than just Zuma. Zwelinzima Vavi, a former general secretary of Cosatu, the powerful trade union federation allied with the ANC, argues that “corrupt hyenas” close to the president within the party bear some of the blame. “People are fed up [and] the ANC members are fed up as well,” he said at a #ZumaMustFall rally in Johannesburg on Dec. 16. “The people who are giving [the president] a round of applause don’t deserve our trust anymore.”

Local elections, due to be held in 2016, will be a major test for Zuma’s leadership of the ANC. Political analysts say the party could even fall below 50 percent support in several major cities, including the capital of Pretoria. Even so, the party that has led South Africa since the end of apartheid is not going anywhere.

“The ANC is not about to lose power, and Jacob Zuma is aware of that fact, which is why he acts with such brazenness,” said Prince Mashele, who runs the Pretoria-based Center for Politics and Research. “We should not be naïve.”