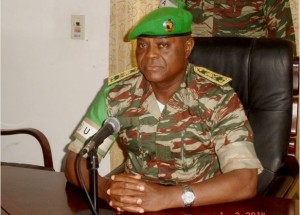 The Special Representative of the Chairperson of the Commission of the African Union (AU) in the Central African Republic (CAR) and Head of the AU Mission for the CAR and Central Africa (MISAC), General Jean-Marie Michel Mokoko, has learnt with deep sorrow the passing away, on 30 November 2015, of General Martin Tumenta Chomu, Commander of the Force of the United Nations Multidimensional Integrated Stabilization Mission in the Central African Republic (MINUSCA). The announcement of his death was made by the Special Representative of the UN Secretary-General in the CAR and Head of the MINUSCA, Mr. Parfait Onanga-Anyanga. On behalf of the Chairperson of the AU Commission, Dr. Nkosazana Dlamini-Zuma, and the Commissioner for Peace and Security, Ambassador Smail Chergui, as well of the entire staff of MISAC, General Mokoko conveys the deepest condolences of the AU to the family of the illustrious departed, the Special Representative of the UN Secretary-General in the CAR and Head of MINUSCA, as well as to the Government and people of the Republic of Cameroon. General Tumenta was the Commander of the military component of the Africa-led International Support Mission in the CAR (MISCA), deployed by the AU from December 2013 to September 2014 to assist in the stabilization of the situation and the establishment of the necessary conditions for the deployment of a UN peacekeeping operation. MISCA, which had taken over from the Mission for the Consolidation of Peace in the CAR (MICOPAX) deployed by the Economic Community of Central African States (ECCAS), became a UN peacekeeping operation in September 2014, with the establishment of the MINUSCA. The AU Special Representative in the CAR commends the remarkable work done by General Tumenta as Commander of the MISCA military component and, subsequently, as MINUSCA Force Commander. In the discharge of his responsibilities, he showed courage and unwavering commitment, contributing greatly to the initial stabilization of the situation in the CAR. It should be recalled that MISCA was deployed in a particularly challenging security situation. Despite its limited means, the Mission was able to carry out its mandate in a satisfactory manner, thus making it possible for MINUSCA to take over. The AU Special Representative in the CAR stresses the Pan-African commitment of General Tumenta, who was an example of dedication and an exceptional leader. In this time of extreme sadness, the best tribute that can be paid to the illustrious deceased is to carry out successfully the ongoing transition in the CAR, an objective for which he endeavored with all his strength. *AU/APO]]>