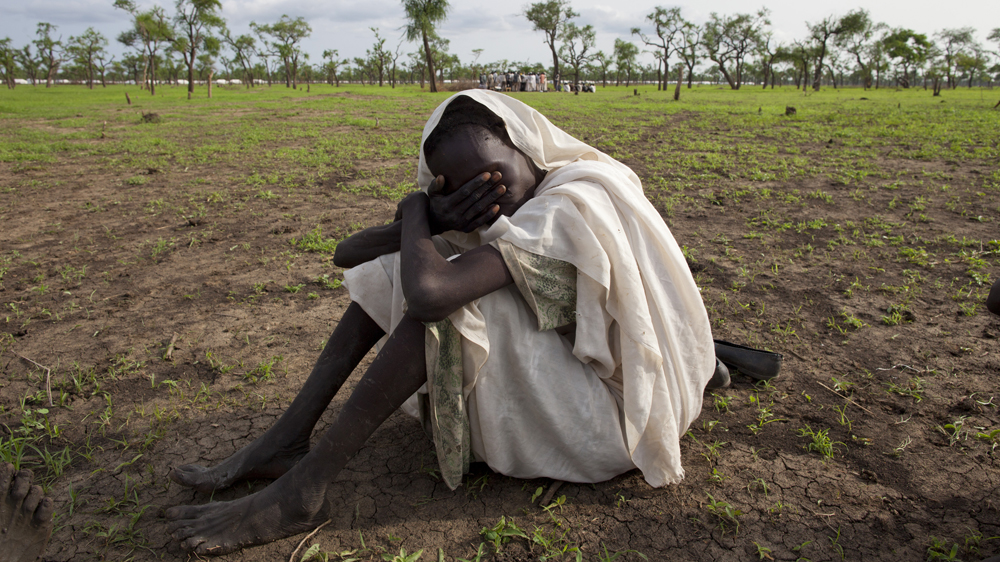 Aid organisations are unable to reach hundreds of thousands of people, and thousands more are at risk of starvation as civil war in South Sudan reaches the end of its second year, according to aid officials speaking to Al Jazeera.

Despite a peace agreement signed in August, ongoing fighting has put the lives of thousands at risk.

The worst-affected areas are in the central and southern districts of Unity State and the west bank of the Nile in the Upper Nile State, where the conflict has displaced more than 2.2 million people and left 3.9 million others “severely food insecure”, according to the latest humanitarian report published by the UN on December 1. Tens of thousands have lost their lives.

“It’s Unity State … [that] we’re most worried about,” says Joyce Luma, the country director of the World Food Programme (WFP) in South Sudan.

“We haven’t been able to access central Unity in a long, long time,” Luma told Al Jazeera. Around 300,000 people are inaccessible, with some locations out of reach “since April because of the intensification of the fighting”, according to Luma.

An in-country representative of one of the main non-governmental organisations (NGOs) operating in South Sudan, speaking anonymously so as not to jeopardise the organisation’s relationship with the government, told Al Jazeera that “people are hiding in swamps, surviving on water lilies and fruit”.

“An already very fragile balance tilted fast. There are thousands of people still stuck in the swamps.

“Tens of thousands of people are in need of basic food, water and shelter. There’s a big question whether they can survive. The water is unsafe; there’s no access to clinics. How sustainable is that? I suppose the strongest will survive,” the NGO representative said.

There are similar problems in Upper Nile State on the west bank of the Nile.

“A lot of people are hiding in the brush,” says the local NGO representative. “Access is very difficult. Whole towns have been wiped out. The prospects are very bleak.”

Obstacles to the delivery of aid to assist the thousands who are stricken have mounted as the conflict has intensified.

“It’s difficult to find people,” says Mario Zappacosta, an economist at the Food and Agriculture Organization (FAO) in South Sudan. “Some are in the POCs [the United Nation’s Protection of Civilians camps], but people are moving continually, so it’s hard to know where they are.”

More than 180,000 people have fled the fighting to the relative safety of POCs in the towns of Juba, Bentiu and Malakal, according to a recent report by UNICEF. But most of those displaced do not have such protection.

The dispersal of the population into remote areas has created huge challenges for the physical delivery of aid.

“In the swamps of Unity State, you can’t do air drops – not because of the security situation, although that remains extremely volatile, but because they require extreme precision,” says the NGO representative.

“You need a large drop zone; otherwise, you run the risk of losing the aid in the water. We need to ensure there is no one within 500 metres of the drop and there is no water. We don’t have enough land to do that,” he explained.

Some aid organisations have turned to helicopter drops to mitigate the problem. “For the first time in the history of the FAO, we’re doing some shipments by helicopter of fishing nets and seeds to Unity State,” says Zappacosta. “But much more is needed in the swampy areas.”

Helicopter drops can be prohibitively expensive. The most cost-efficient method of transport, which is by barge, has been impossible for most of the year due to the conflict along the banks of the Nile in Upper Nile State.

“The cheapest option for aid delivery is by river; the next is fixed wing planes, then there’s the horrible option of helicopters, which we’re being encouraged to use,” says the South Sudan programme manager for another major NGO, also speaking on condition of anonymity to protect the organisation’s ability to continue to operate in the country.

To make matters worse, aid deliveries intended to save the lives of at-risk civilians have either been blocked by fighters or taken by them.

“There have been WFP food drops in the south of Unity State where the military has come and taken it all,” says a researcher in South Sudan, speaking on condition of anonymity for security reasons.

“I can’t say it’s a rampant practice, but the humanitarian community is working with extreme caution,” says the NGO representative. “If you have three or four instances of this sort, you will lose donor investment.”

In practice, this does not always happen.

“We are pushing for access for the delivery of aid,” says Ariane Quentier, a spokesperson for the UN Mission in South Sudan (UNISS). “We have had a lot of problems with both the government authorities and the opposition. We need access, but far too often, this has been forbidden by both sides. It is a constant problem.”

The combination of physical barriers to aid delivery and the risk of aid going astray, inevitably means that organisations are able to make fewer deliveries than they would like.

“Right now, there is a sense of caution because everyone is afraid that the assistance they deliver will be attacked, hijacked or taken by soldiers,” says the NGO representative.

“If the risks are too high we simply don’t drop, because it defeats the purpose.”

Attacks on humanitarian workers themselves have made it difficult for aid organisations to maintain a localised presence that would allow them better access to vulnerable populations.

At least 30 aid workers were killed between the onset of fighting in December 2013 and August 2015, according to a report by the UN Panel of Experts on South Sudan. In a statement on September 16, the NGO Forum, an independent coordinating body of national and international NGOs, said that there had been 37 robberies at aid agency compounds in a 90-day period.

Thirteen aid workers were released unharmed in late October after being held captive for a week by rebel fighters. On September 10, robbers shot and killed an aid worker from Action Against Hunger in Juba.

The International Committee of the Red Cross (ICRC) announced in early October that it had been forced to withdraw its staff from a humanitarian compound in Leer County, Unity State, after it was looted and aid workers were threatened.

Two workers from Doctors without Borders (MSF) were killed in two separate attacks in the Leer area in August. They had fled the town of Leer in May, when MSF evacuated its entire staff from the town in the face of intensified fighting.

An attack on a hospital in Kodok in Upper Nile State supported by an ICRC surgical team in July resulted in the deaths of 13 people and also led to the evacuation of the facility. The hospital had been providing life-saving services for a catchment area of about 40,000 people.

“There is quite some impunity in attacks against humanitarian staff,” says the NGO programme manager.

“An NGO badge doesn’t always help: The chances that the perpetrator will be found and justice carried out is quite low.”

In a glimmer of good news for those cut off by the conflict, two teams of aid workers reached the towns of Leer and Thonyor in the south of Unity State on December 1, after two months with no access. But in the absence of a ceasefire, many thousands remain cut off.

War broke out in South Sudan in December 2013, just two-and-a-half years after it separated from Sudan, a divorce that was itself the product of almost five decades of conflict.

What began as a political dispute between President Salva Kiir and former Vice President Riek Machar quickly escalated into a widespread conflict with strong tribal dimensions.

The post South Sudan: The many barriers to aid appeared first on African Media Agency.