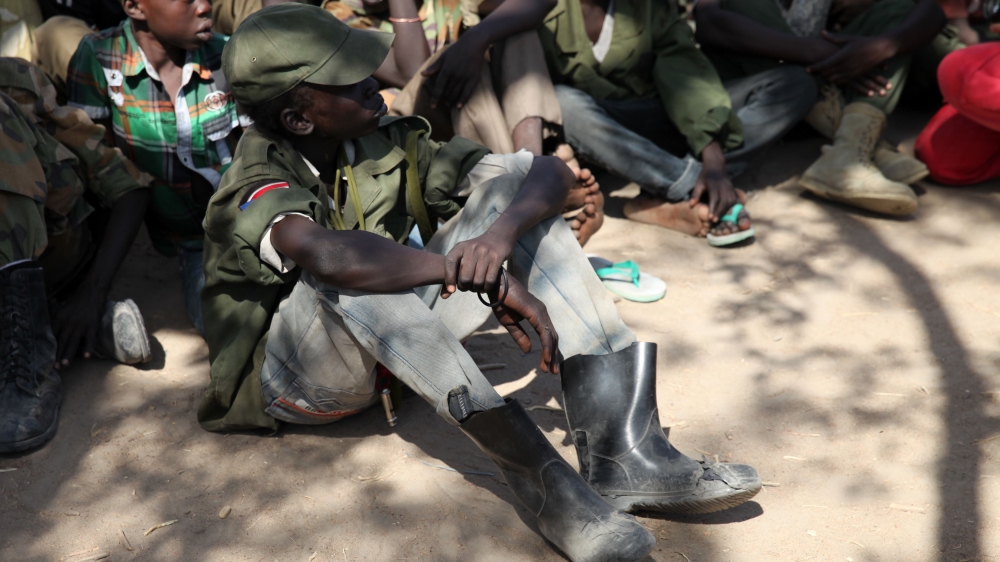 The United Nations Children’s Fund (UNICEF) estimates 15,000 to 16,000 children may have been used by armed forces and groups in the conflict.

New York-based Human Rights Watch interviewed 101 child soldiers, many of whom told terrifying accounts of being taken away from their families at gunpoint, thrown into gun battles while living months with little food.

Unity State has been the focus of fighting since May with many witnesses recounting horrific tales of men wearing military fatigues sweeping through villages, killing people, destroying homes, looting livestock, and stealing crops.

Nyalony Jor said she and her one-year-old baby managed to escape by fleeing into the Sudd swamps when government troops attacked her village in Leer county.

“They looted the house, they killed people, the stole our cows and then they raped some of the women and girls,” Jor told Al Jazeera.

Fighting has persisted in some pockets of the country despite a peace deal that was signed in August between President Salva Kiir and Riek Machar, the rebel leader.

The civil war started in December 2013 after Kiir accused Machar – who was then his deputy – of plotting a coup.

Thousands have died and the conflict has displaced more than two million people, with another 2.4 million facing severe food shortages. The world’s newest nation tops the rankings as the number one failed state.

“The procedure is to dispatch a team to work with the UN in order to go and verify and identify where those children were actually recruited,” Ateny said.

“Unfortunately another war has started, which has hampered efforts to go and find those children.”

He said child-soldier recruitment would not be tolerated.

“The government does not accept impunity. Those found to be guilty of recruiting children will be punished,” Ateny said.

In a statement to Al Jazeera, UNICEF said some progress had been made to secure releases.

“What is urgently needed now is for all parties in the conflict to live up to their commitments and demobilise the thousands of children who have been used by armed forces,” it said.

UNICEF said 1,750 children were recently released and reunited with their families.

“Now it is the turn of the many thousands of other children who remain with forces on both sides of the conflict,” the statement said.