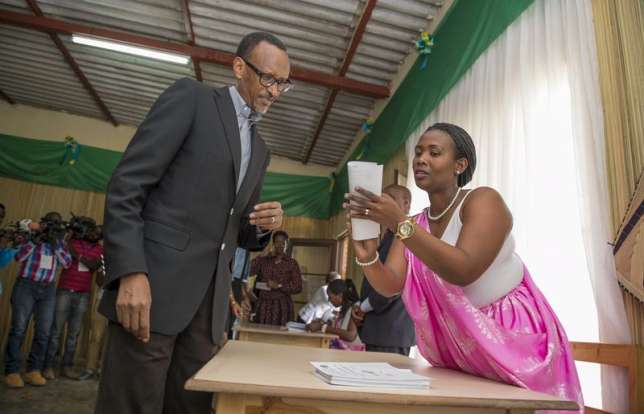 KIGALI (Reuters) – Rwanda’s president Paul Kagame thanked the nation on Monday for voting in a referendum last week that overwhelmingly backed constitutional changes to let him extend his rule beyond 2017, but he did not say if he would seek re-election.

Friday’s referendum, in which 98 percent of those casting ballots voted “yes”, drew criticism from Western powers who worry about the growing list of African leaders who have been seeking to extend their time in office.

Kagame has been president since 2000 but he has effectively been in control since his rebel force marched into Kigali to end the 1994 genocide. The change would allow him stay until 2034, if he chooses.

In Burundi and the Congo Republic, the issue of extending presidential terms has sparked unrest. Rwanda has been calm.

Rights groups acknowledge Kagame has broad support for rebuilding the nation, but accuse the authorities of stifling the media and opposition voices, charges the government denies.

The United States, which has long praised Kagame for transforming the nation since the 1994 genocide, said the president could best serve his nation by stepping down in 2017. “When the time comes to transfer responsibility from one public servant to another, Rwandans already have confidence that it will be done in an orderly and harmonious manner,” Kagame said in a state of the nation address. “No individual is forever, but there is no term limit on values, institutions, or progress,” he said to an audience of Rwandan officials and others who applauded and cheered. Foreign diplomats also attended. He thanked those who took part in the vote whether they voted “yes” or “no”.

“We stand up for these propositions without hesitation and undaunted by reproach. The results are undeniable and the historical context is unforgettable at least to us Rwandans,” he said.

Kagame, 58, had said any decision on re-election would happen after the vote, without giving a specific timeliness.

The European Union criticised the speed at which the vote was held, saying it did not give enough time for the public to consider the arguments. The referendum took place about a month after Senate gave its final approval to the draft changes.

There is only one real opposition party in Rwanda. The Democratic Green Party, which is tiny and has no seats in parliament, had its bid to block the constitutional amendments rejected in the courts.

The constitutional changes will allow him to run for another seven-year term in 2017, followed by two five-year terms afterwards.