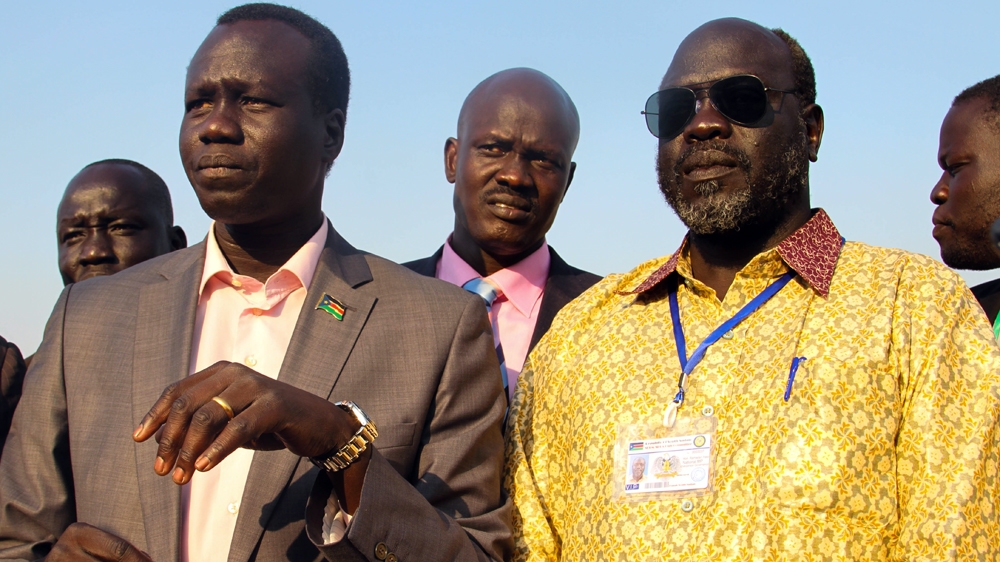 Juba, South Sudan– South Sudan’s rival factions said on Monday they are both committed to finally pushing ahead with implementing a peace plan signed in August to bring an end to the disastrous two-year civil war.

After being delayed by more than a month, an advanced delegation from Sudan People’s Liberation Movement-In Opposition (SPLA-IO) arrived in Juba on Monday and was met by members of the government.

“I would like to reaffirm our commitment to the implementation of the peace agreement and for reconciliation, the development of war-affected areas, and for final peace in our country,” he said.

SPLM-IO leader Riek Machar was not part of the team that landed in Juba. The delegation was supposed to be a 150-strong combination of political leaders and military generals, but technical difficulties delayed the flight carrying most of the negotiators.

Ramadan Hassan Lukor, the executive director for the Office of Riek Machar, said they want to start working towards peace.

The rivalry between South Sudan’s President Salva Kiir and his former deputy Riek Machar has plunged the country into a two-year civil war that has killed thousands, displaced 1.66 million people, and left more than two million facing severe food shortages.

It began in December 2013 after Kiir accused Machar of trying to plot a coup.

Forces loyal to both sides are accused of atrocities including rape, killings, looting and recruiting child soldiers.

The conflict exacerbated tension between the country’s two biggest ethnic groups, Machar’s Nuer and the Dinka, President Kiir’s group. At times the fighting was divided along ethnic lines, but after two years those lines have been blurred with shifting alliances and other outbreaks of violence not connected to the war.

A peace agreement was signed in August that was supposed to see an end to fighting and a transitional government set up, but violent attacks have persisted in Unity, Jongelei and Upper Nile states.

Andrea March Marbior is director of the Kush Centre based in Juba. He said the delegation’s arrival is a positive step – but it’s only the beginning of a long process.

“The international community and the Intergovernmental Authority on Development [IGAD] need to put pressure on both parties to live up to their promises,” Marbior said.